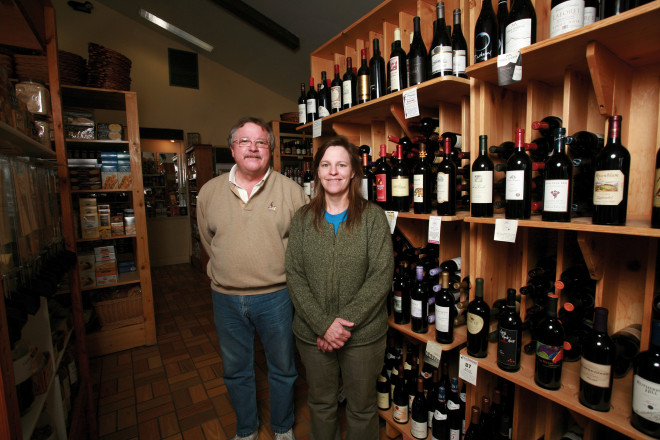 So, Top Shelf Café and Gourmet is not your mother’s corner deli…unless your mother was in the habit of running to the corner to pick up a tin of black truffle butter, some Korean ginger scallion marinade or a bit of Purple Haze goat cheese with lavender and fennel.

The shop somehow manages to fit an incredible number of items into a relatively small space without seeming to be overcrowded. Co-owner John Seiberlich estimates that he stocks about 500 kinds of wine and spirits and between 1,000 and 1,500 other bits of gourmet fare, including more 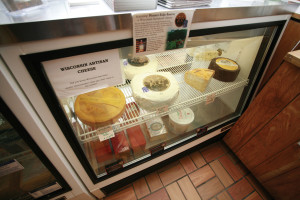 than 110 kinds of cheese from Ireland, France, Canada, Germany, England, Denmark, Australia, Switzerland, Norway, Spain and Greece…and, of course, Wisconsin and the rest of the U.S.

Most popular, John says, are the Cotswold cheddar with chive and green onion and Pleasant Ridge Reserve from the Uplands Dairy near Madison, where the cheese maker’s wife is a Door County girl. And, if customers don’t find their favorite among the 110 varieties on hand, it can be ordered. Top Shelf also offers its wares via the internet. “We recently shipped eight cones of sapsago cheese to a woman in California who was delighted to discover it on our website,” John says.

He and his sister, Annie Alberts, opened Top Shelf in April 2003 at the Country Walk Shops in Sister Bay. They took the space, which had been Manz’ Specialty Foods (on the corner Highway 42 and Country Walk Drive), and installed all new fixtures, furniture and shelving. “We were thinking outside the box,” John says. He credits his wife, Kathleen, with naming the business. “She felt that Top Shelf implied a better-than-average product,” he says. It would appear she captured its essence. 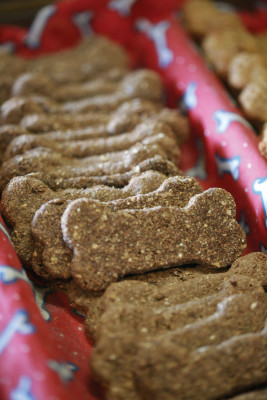 “We wanted to offer a concentrated source of fine foods not readily available elsewhere in the county,” says John. They still stock a number of items the previous owners carried but have greatly expanded the product lines. Their shelves and coolers are filled with hard-to-find ingredients for cuisines native to China, Greece, India, Indonesia, Italy, Japan, the Middle East, Scandinavia and Thailand.

Virginia Olson of Sister Bay was a customer of the shop long before John and Annie bought it and changed the name. She loves Top Shelf because it provides big city service with a friendly Door County touch. “They’re on a first-name basis with customers,” she says. “One of the things I like most is their meat. [Annie was hand-cutting some filets for her that day.] They have lovely fish, a nice wine selection, and, oh, the cheese! The gorgonzola-stuffed olives are my favorites.”

John and Annie grew up in Brookfield, a Milwaukee suburb, the two oldest in a family of five children, and were very familiar with Door County, going back to the early 1960s. John recalls that Annie, the three younger kids and their mother spent many summers living on a boat at Alibi Dock in Fish Creek, “back in the day when JJ was flipping hamburgers in a little shack on the dock.” (That’s the same JJ who now owns popular restaurants in Sister Bay and Jacksonport.)

Annie has lived in Door County for years, working as an emergency medical technician, operating a catering business, cooking at the White Gull Inn, The Cookery and The English Inn and, for a time, running Annie’s Corner Café on Country Walk’s lower level. She also coaches a number of girls’ sports at Gibraltar High School. 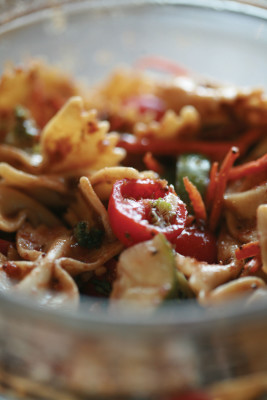 John spent 23 years with IBM, including five years in England. He traveled extensively in Europe and the Middle East, providing him opportunities to appreciate the food and wine of many cultures.

“I had a background in business, and Annie knew the food industry,” John says. “When I left IBM, we were interested in starting a small business of some kind, and this seemed to be the perfect spot. We were very close growing up and work together well, and our different talents complement one another perfectly. I believe that’s responsible for the success we’ve had.”

Top Shelf is a multi-faceted business. The shop is busy with walk-in customers. (The interview for this story, scheduled mid-afternoon on a Thursday in late August, was interrupted often as John rang up orders for top-of-the line cigars, wine, cheese and other gourmet selections, as well as made sandwiches for people dining on the spacious, tree-shaded deck.)

“My customer base,” John says, “are people with second homes in the county and those who live on boats in the various marinas. There are so many who come in two or three times a week and spend $60 or $70 or $80 for a bottle of fine wine and the other ingredients for a special meal.”

Speaking of wine, John mentions that he personally selects every brand he purchases from 10 suppliers and is familiar with the taste of many of them so that he can recommend the perfect bottle for each customer. 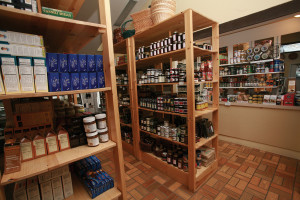 John slices meat, cheese and fresh-baked breads for made-to-order sandwiches and can add a variety of salads – all, like the bread – prepared daily in the shop’s spacious kitchen. “We roast the sirloin in 30-pound pieces,” he says. “You can really taste the difference when it’s sliced fresh. And every ingredient in the salads is cooked on site.”

Service at Top Shelf is friendly and personalized. For a customer seeking gluten-free chipotle chilies, John fetched a particular brand and advised that they be rinsed thoroughly before use.

Box lunches for biking, hiking, boating expeditions or conferences are prepared to order. “Sometimes,” John says, “families gathered for a reunion prefer to spend time sharing memories and catching up with recent events, rather than cooking. We can prepare a meal or two for them, whatever they want.”

The Country House Resort in Sister Bay offers a package that includes Top Shelf box lunches with a room and concert tickets – an example of the synergy that exists between the shop and other local businesses. “We sometimes work with restaurants to select wines that will be tasty for both our customer bases,” John says. 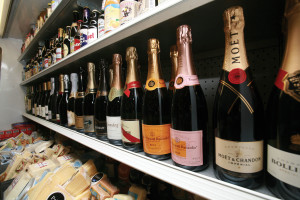 Annie has built the reputation of her catering business on quality, with an emphasis on carefully-sourced, seasonally-inspired ingredients. Whenever possible, produce is bought locally. She can provide meals in a wide price range, from a mini-continental breakfast of fresh fruit and assorted baked goodies to a formal dinner featuring Australian lamb chops with mint sauce for a large wedding party.

The Door County wedding of Matt Frick and his fiancée Sarah of Pewaukee, Wisconsin scheduled for September 18, 2010, planned months in advance, could easily have been a disaster when the wedding planner backed out just three weeks before the date.

After hastily checking other possibilities, the couple found Annie. “She really stepped up,” Matt says. “She was personable, professional, a really good person. Even with time short, she didn’t rush, but provided us with a great product at a very reasonable price. And she didn’t just do the dinner, she also organized the tent and table and chairs. We wouldn’t have changed a thing!”

And they didn’t. When the Fricks returned to Door County to celebrate their first anniversary, they asked Annie to prepare the same meal for them.

Top Shelf does a strong business in gift baskets, especially at Christmas and to visitors on fall getaways. Filled to order for special occasions like birthdays and anniversaries, they can be delivered locally or shipped anywhere in the country.

While one can’t find a head of lettuce or a box of Wheaties in this upscale shop, it does have many products offered at a supermarket. The difference is, rather than one or two kinds of olives, Top Shelf offers 11 varieties available with 11 different stuffings. Further, one can find dried mangoes, spanikopita (a traditional Greek spinach pie), or, for afternoon tea, triangles of albacore tuna in a light lemon wasabi sauce, topped with black and white sesame seeds.

Top Shelf is a fascinating place to browse, and it’s a disciplined soul, indeed, who can leave without a bag chockfull of unique edibles and potables.