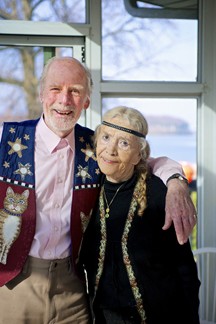 Karsten and Ellen Topelmann both grew up in World War II Germany, but they met as adults in Chicago and married in 1959. Ten years later they moved to Ephraim to create the Hanseatic Gallery on Church Street in Ephraim. Photo by Len Villano.

There’s surely no artist or art lover in Door County who isn’t familiar with the watercolors and oils of Karsten Topelmann and the acrylics of Ellen, his wife. But not everyone knows what Paul Harvey used to refer to as “the rest of the story.”

In the case of the Topelmanns, the rest of the story refers not to what came after their success in the art world, but what came before, when they were children growing up in Germany during World War II.

Karsten was the son of a well-to-do couple in Munich – his father an architect and his mother a sculptor. Their home was filled with classical music, and his parents made sure that he was exposed to other forms of the arts. When he was five, out for a Sunday stroll, they stopped to watch an artist at work. Noticing Karsten hanging over his shoulder, the man asked, “What do you want to be when you grow up?”

“An artist,” was Karsten’s prompt reply.

“Well then,” the fellow said, “you’d better get used to eating dry bread!”

Karsten was just a few weeks past his 10th birthday in 1939 when Germany invaded Poland. His mother recorded in her diary that her son was so upset after hearing the news on the radio that he was unable to concentrate on his schoolwork the rest of the day.

Meanwhile, Ellen Sprogoe was growing up in Hamburg. Like every other teenager in Germany, she was compelled to enlist in the army at 16. She served as a military draftsman and twice saw Hitler when he came to christen ships in Hamburg’s shipyards.

Karsten’s school was evacuated from Munich to Garmisch, a popular area for winter sports, where resort hotels were transformed into schools or hospitals for wounded German soldiers. To help pass their spare time, Karsten and his friends formed an improv theater troupe to entertain the hospital patients.

Thirty years later, while vacationing in Europe, Karsten learned that Michael Ende, a member of the troupe who went on to write the popular fantasy novel, The Neverending Story, was living in a castle near Rome.

“He invited us to dinner,” Karsten says, “and raved about my ability at improvisation. He told Ellen he was sure I would grow up to be an actor.”

As his 16th birthday approached in 1945, Karsten went to register for the army. Asked what he’d prefer to do, he responded, “Anti-aircraft.” He was told, “No, that’s a woman’s job. You will be in the Black SS, and we will see you on the Eastern Front.”

In the meantime, he was part of the Army of the People, required of every boy under 16 and every man over 60. “We dug fox holes, so we could protect our village if the enemy came,” he says, “and felled trees to block all the roads.”

“And that did no good,” Ellen adds. “The tanks came in over the fields.” They did, in fact, come right into the yard of Karsten’s home in the countryside, where the family had moved when bombs destroyed their house in Munich. 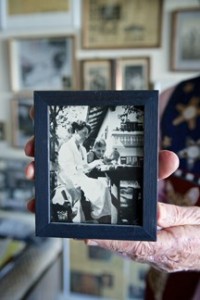 Karsten Topelmann holds a treasured photo from his childhood in Germany where he is watching his mother sculpt.

“Two American soldiers with machine guns knocked on our door and asked my mother if they could come in and make coffee. Of course, she said yes,” Karsten recalls. “On their way to the kitchen, they left the machine guns in the foyer. I looked at those guns and wondered what I should do. It was a tense time, but there was no confrontation. Later, the mayor went out with a white flag and surrendered our village.”

The war ended two weeks before Karsten’s 16th birthday. When his family was able to return to Munich, they resumed their participation in the arts. Soon after the war, Karsten’s father got two tickets for a performance of Gustav Mahler’s Third Symphony. Because he was Jewish, his work had been banned in Germany.

“The Third is known as the Resurrection Symphony,” Karsten says, “and it was an unbelievably moving experience. Both my father and I were in tears. Mahler is still my favorite composer.”

Karsten finished high school and graduated from the Academy of Art in Munich. Although his heart was in painting, he felt he should major in graphic design to earn a living.

In 1955, a friend offered to sponsor Karsten and arranged work for him in Davenport, Iowa. Soon afterwards, he moved to Chicago and interviewed for a job in the store-planning department of Montgomery Ward. Without references, he was eager to make a good impression when two men took him to lunch.

“They ordered martinis,” Karsten recalled. “I was familiar with Martini & Rossi vermouth, and thought that must be what they were having, so I ordered the same. Bad decision! By the end of lunch, I was just trying to hang on to answer their questions. Fortunately, I got the job.”

Two years earlier, Ellen’s aunt had sponsored her to come to New Jersey. She found no work there and moved on to Chicago, where she worked as a waitress for two years before becoming an animator for Lewis and Martin Films. She and Karsten were introduced by a mutual friend and married in 1959.

A friend also introduced them to Door County and, while vacationing on Kangaroo Lake in 1969, Ellen saw an ad for a rooming house and three cottages for sale in Ephraim “just 100 feet from the water.” She fell in love with the property immediately, but Karsten had doubts about the 100-year-old house with one electrical outlet and no closets. He also had concerns about leaving a job with good insurance and stock options. Ellen prevailed, and they sold their home in suburban Chicago, giving them a nest egg to live on until they became self-supporting as artists.

Alas, the water near their new residence was not only in Eagle Harbor, as the house proved to be below street level. The yard and first floor flooded, and early customers arrived on planks balanced on rocks. The nest egg was soon used up raising all the buildings, so money was very tight in the early days. 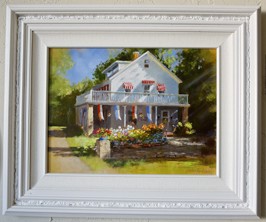 Karsten Topelmann’s painting of the couple’s Hanseatic Gallery in Ephraim.

Ellen recalls a couple arriving at the gallery that occupied two downstairs rooms, asking for a painting of Cana Island. “‘My husband is over there painting right now,’” I said. “‘Come back tomorrow.’ Then I called to Karsten in the back room, ‘Get over to Cana Island and start painting!’”

As the popularity of the Hanseatic Art Gallery at 3060 Church Street grew, it spread from the original two rooms to fill the house. In 1979 Karsten designed a two-story home for the family on the site of one of the rental cottages.

While their summers were filled with the gallery, Karsten and Ellen spent many winters abroad in Germany, Russia and the Canary Islands. Thirty-five years after WWII, when they were spending the winter in Rothenburg, Germany, Karsten applied to include some of his paintings in the annual art exhibition in Haus der Kunst in Munich – a festival his parents had taken him to many times, where his affinity for watercolors and oil painting flourished.

“My paintings were featured in the catalog and sold,” he says. “It was a beautiful happening so many years later, in the same building!”

Now in their eighties, their traveling days are over, and they spend most of their time in the glass aerie that surrounds two sides of their second story. Karsten still paints at least half a day – longer in the winter, when the gallery is closed and painting is his relaxing therapy.