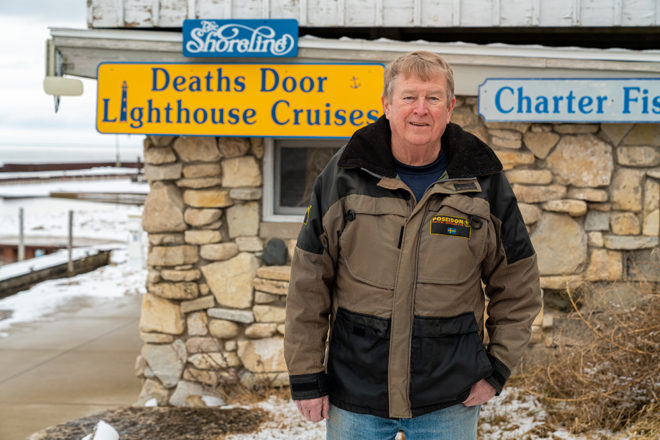 Jim Robinson, Captain of The Shoreline in Gills Rock. Photo by Brett Kosmider.

Not with the Navy, mind you — just for kicks.

As a young man in Chicago, Robinson knew a guy who sold parts from retired military bombers, including the mammoth planes’ 10- to 12-foot-long, external backup fuel tanks. And he’d heard of another guy who ran a “torpedo shop,” converting those missile-shaped tanks into personal submarines by adding a hatch cover, seat and manually operated brakes and pedals.

The contraption is known as a “wet sub” because pilots wear a dive suit and steer it somewhat like an underwater kayak — with their head sticking out of the hatch, and arms and legs pumping below to either propel the craft or come to a stop. There are more expensive, refined military versions for Special Forces-type work (aka “manned torpedoes”), but Robinson wanted nothing more than to simply explore the depths.

“I only had a Corvair convertible, so we had to borrow a truck and a trailer to bring it over to my parents’ house,” Robinson said.

Concerned that his folks might frown on taking ownership of a homemade Hunley, Robinson and his buddy tried hiding it on the secluded back end of the property.

“Well, the neighbors saw this ‘suspicious’ truck in the alley and called the police because someone had been stealing lawn furniture in the area,” Robinson said. “So the police officer tells my dad there was some other stuff back there, too, besides the vehicle — and if I didn’t know better, I think it’s a submarine. My dad said, ‘Hmm, I know where that might have come from.’ They put up with it for a while, but I never got to use it and had to sell it.”

But little did Robinson know that telling these tales of the sea would turn into a popular business in the future.

His Shoreline Scenic Cruises in Gills Rock, founded in 1994, filled a surprising void in the vacation industry of a peninsula that has more coastline than any county in the country: a strictly sightseeing tour, from the water’s vantage point, of the Door’s inspiring limestone cliffs, historical lighthouses and mysterious shipwrecks.

At the time, Robinson had already begun running diving charters from his present location at the Shoreline Marina, where Highway 42 bends 90 degrees east on the last couple of miles to the tip of the peninsula. He knew he could attract customers for narrated pleasure voyages as well, based on talk he’d heard through his former vocation as owner of the Wagon Trail Campground near Rowleys Bay for 18 years.

“People would come up and ask, ‘Is there somewhere we can go for a boat ride?’” Robinson recalled. “And they meant not a ferry to Washington Island or a fishing charter, but just to see some scenery and coastline. Nobody was doing it.

“So when I got the dive boat, I started advertising lighthouse tours and sunset tours, too. [The dive groups] would go up to Upper Michigan, get back by 3 in the afternoon, then we would unload 10 or 12 divers and 20 or 24 [air] tanks, turn the benches around, and load up for two more cruises. Of course, I was a lot younger then. Now there’s tour boats in every port in Door County. I guess we started something.”

Robinson’s own 16-passenger vessel, The Shoreline, is anchored off the grounds of, appropriately enough, The Shoreline Restaurant, Shoreline Motel and Shoreline Marina, all of which Robinson has owned at various times.

He lives in a tasteful condo-apartment above the restaurant with his wife and office manager, Ronnie; and his 11-year-old best friend, Snickers, who’s colored caramel and beige — like the candy bar fillings — and serves as the greeter dog. During the summer season, when work consumes him, Robinson’s world gets quite condensed.

“My commute to work is outside to the deck and down the stairs,” Robinson said, noting that he might not make it into Sister Bay for weeks at a time in season.

The Shoreline — with an open deck in the seating section and covered cabin for the captain — is a surplus Navy patrol boat/crew shuttle built at Sturgeon Bay’s former Peterson Builders shipyard in 1972. Robinson, coincidentally, dove off of it in the early ’70s, when he used to visit On the Rocks dive lodge in Ellison Bay a few years before moving to Door County. He was a pharmaceutical representative at the time.

An uncompromising maintenance schedule has kept the boat afloat for nearly half a century.

“The guys at the Coast Guard Marine Safety Office [in Sturgeon Bay] tell me, ‘Man, she’s in good shape,’” Robinson said. “A neighbor buys my old, used oil and spark plugs when I replace them. He says he can’t find anything better in the stores. They overbuilt these boats for the military. It’s not your typical tour boat. If we get into some bad stuff, it’ll get us home.”

Once, during a visit to the Virginia-based U.S. Naval Station Norfolk — the world’s largest — Robinson was enthused to see a military model, and sister vessel, of his boat hanging off the side of a combat ship. A guard “with a gun” sternly told him he couldn’t get any closer or take any pictures, but Robinson still managed to get his photos at a different part of the sprawling base and with more cooperative security personnel.

“The second guy had been with the old supervisor of the shipbuilding office in Sturgeon Bay and said it was the best gig he ever had in the Navy,” Robinson recalled. “He asked if I knew Butch’s Bar and the Red Room, even though he called it ‘the Red Bar.’”

In 2008, after surviving a cancer scare, Robinson spun off the dive business to one of his former crew members and fill-in captains who wanted to run their own ship. He didn’t know whether he would be up to the rigors of 25-mile trips across the open bay or lake anymore.

By comparison, his two-hour tours stay within closer sight of land, plying the more sheltered — though still tricky — waters of the upper-west peninsula, Death’s Door strait, and Plum, Pilot, Detroit and Washington islands. Passengers go ashore at Plum Island and, although its two late-19th-century range lights are off limits, visitors can look at them up close, along with the vintage keeper’s house and federal lifesaving station.

The lore of the lighthouse keeper — a pre-Coast Guard human sentinel — has furnished Robinson with a favorite, and harrowing, tour story. It’s the dramatic saga of Martin Nicolai Knudsen, who single-handedly saved the crews of two foundering schooners off Pilot Island in 1892. The hero’s descendants recently donated the gold medal Knudsen received from his peers to the Door County Maritime Museum.

“Being a lightkeeper was not some easy, cushy job,” Robinson said. “You had to keep the steam up for the foghorn, keep the light itself going, tend the gardens for food, cut firewood for survival. They must have been in damn good shape. And these early rescue boats were rowboats, not motorboats. They were a hardy group.

“Death’s Door is notorious for a reason, with Green Bay and Lake Michigan meeting there. It can be rougher there than out on the lake.”

Robinson said that guests often ask whether the barren Pilot Island — when seen from a distance — is a city, given its illusory “skyline” of bare trees, old structures and swarms of cormorants.

Conversely, some wonder whether Washington Island — population 700, and a stand-alone township — is settled. But Robinson assumes no prior local knowledge and is happy to answer any and all questions to get a lively conversation going.

Hundreds of shipwrecks lie in the silent depths of Robinson’s route. The Shoreline passes over about a dozen of them and uses side-scan sonar to show eerie images on deck of any ruins within 200 feet of the surface.

One wreck — the Grapeshot — rests in shallow waters off Plum Island and is clearly visible without any aids, Robinson said. With his nearly lifelong, detailed experiences as a diver in these waters, he said, “I can tell them this was a piece of the hull and that over there is a piece of the deck.”

Landgraf is a fellow Chicagoan who had bought dive gear from Robinson years ago — and, remarkably, that orphaned submarine — before both coincidentally wound up living in Northern Door. Smith was a rescue-boat captain on Pilot Island during the mid-1980s when the Coast Guard station there was still active.

The crew understands, though, that passengers might be equipped with varying degrees of sea legs or adventurous spirit.

“We have times where I see big breakers in the distance or we’re in five- or six-footers, and the people are just having a ball,” Robinson said. “But we base the tour on the level of the least comfortable. If you’re terrified or seasick or whatever, we’re not so far out that we don’t head back, drop them off, then go on with the tour. We watch the weather and don’t go out at all if it looks like it’s going to be real bad.”

After all, unlike his younger self who wanted to do some submersible navigation, Robinson would like to stay above the waterline these days.

Learn more about the On the Rocks dive lodge in the summer issue of Door County Living, coming in June.