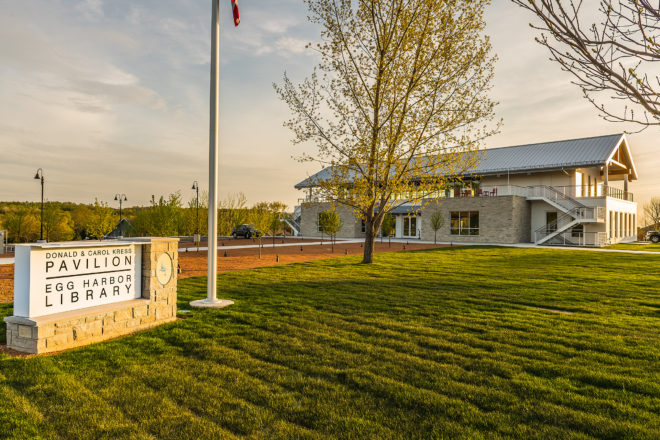 Additions such as the expanded beach and the Kress Pavilion (above) are part of the reason why Egg Harbor has seen visitor numbers surge. Photo by Len Villano.

The evidence is everywhere. On the patio of One Barrel Brewing Co. on a sunny day. In the lines at the checkout lanes of Main Street Market. On the crowded sand of the public beach. And in the numbers of the Door County Tourism Zone’s annual report: Egg Harbor is surging ahead as the county’s most popular destination.

No, that’s not a misprint. Although it has long lagged behind Ephraim, Fish Creek and Sister Bay in the popular consciousness, when it comes to where people stay, Egg Harbor comes out on top, and it’s not even close.

The two municipalities of the Village of Egg Harbor and the Town of Egg Harbor raked in $870,000 in room-tax revenue in 2018, nearly $140,000 more (18 percent) than Gibraltar, the next-highest revenue generator. Almost all of the township’s lodging comes from the Landmark Resort and The Shallows, located just over the line between the village and the township, which are both represented by the same business association.

Revenue in the town was up 10 percent in 2018, second only to Liberty Grove (10.7 percent) in growth over 2017. The Landmark Resort’s 294 rooms are a big part of that. Jeff Larson, Landmark’s director of marketing and sales, attributed that to several years of increased marketing and $4 million in room updates in the spring of 2017.

“The things we did then are paying off now,” he said. He credited the combination of digital and print advertising, social media, Door County Visitor Bureau efforts and increased rates for creating a snowball effect for the county, but particularly for the Landmark.

“It wasn’t just one point,” he said. “And I think you can also point to the changes in Egg Harbor. I think Landmark has benefited from the Kress Pavilion being built, Shipwrecked rebuilding, One Barrel Brewing. Then you have the new beach and marina. Egg Harbor looks to be a happening place.”

Bob Dickson, owner of The Shallows, attributed a portion of the growth to the increase in vacation-home rentals in the town as well. Chad Kodanko, co-owner of Husby’s Food and Spirits and Rent Door County, said Egg Harbor’s surge doesn’t surprise him.

“That community has been underserved for years,” Kodanko said. “It has just been ripe for the picking. With the number of rooms there, if you open a restaurant and have good food, you’re going to be busy.”

Sister Bay also showed that vacationers are not turned off by perceived parking shortages or restaurant saturation. In 2017, Sister Bay surpassed Ephraim in room-tax collections for the first time and continued to grow in 2018. Revenue is up 25 percent in the village since the beach expansion and highway reconstruction were completed in 2015, and village lodging boasts the highest peak-season occupancy rate in the county at 85 percent.

The growth of Airbnb and VRBO continues to present challenges in the marketplace and for the Tourism Zone Commission.

“As recently as 2013, there were only 12 to 15 Door County properties on these platforms,” said Tourism Zone Administrator Kim Roberts. “Today there are 535.”

“These short-term rentals are a very, very important part of our tourism marketplace in Door County,” Roberts said. In 2018, only Dane and Milwaukee had more vacation-rental homes than Door County. Overall, the lodging industry brought in nearly $90 million in revenue to the county.

Roberts said it’s hard to pin down the impact of the vacation-home rental market at any given time.

“There’s a lot of ebb and flow of people who try it and find it’s more work than they expected,” Roberts said. “It used to be, people were offsetting some of their costs by renting their homes. Now more people are really trying to make a business out of it.”

Despite the rancor in some corners about overdevelopment, the report shows the number of hotel units in the county is actually declining. Several properties have come off the rental roles in recent years as they’ve transitioned into employee housing, including the Cape Cod Motel in Egg Harbor and the Bluffside Motel in Sister Bay. The Mariner in Egg Harbor and Helm’s Four Seasons in Sister Bay have also closed since 2008.

The average daily rate has also soared, from $124 to $162 per night. That number is influenced not just by rising rates, but also by the number of homes coming on the rental market that charge hundreds of dollars per night for multiple bedrooms but still count as a single room night.

“One component we don’t know with vacation rentals is how many people are occupying these homes,” Roberts said. “A four-bedroom house counts as only one room night, even if eight people are sleeping there.”