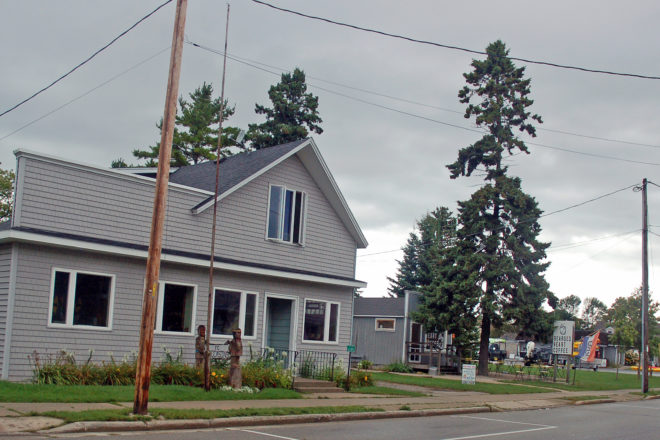 Door County Brewing Co. hopes to move to this location in downtown Baileys Harbor and open in time for the 2017 season. Bearded Heart Coffee will remain at its current location. Photo by Jim Lundstrom.

After clearing up some confusion about the scope of the town’s authority in granting a conditional use permit request from the Door County Brewing Co., both the Baileys Harbor Plan Commission and Town Board approved the brewery’s request at a packed house meeting on Sept. 12.

On Sept. 6, brewery owner John McMahon appeared before the town’s Plan Commission for a conditional use permit to relocate the brewery from the corner of Park Road and County F to just a few blocks away in the heart of Baileys Harbor’s commercial district on Hwy. 57.

McMahon already received county approval to move the taproom to the location currently occupied by Fish Creek Moccasin Works, but a conditional use permit is required for the brewery. His intention is to build a 6,100 square foot building, 2,100 feet of which will be devoted to the production brewery, which will have two fulltime employees. McMahon intends to tear down the moccasin works building and rebuild. Bearded Heart Coffee will remain at its next door location.

McMahon said they just ran out of room at the current location, which opened in May 2014. He explained that he hopes to fast-track the new operation by breaking ground in November and opening in May.

At the Plan Commission meeting, two residents of Guy Street whose property abuts School Lane expressed safety concerns about brewery traffic competing with fishing boat traffic on School Lane. McMahon was then tasked by the Plan Commission to come up with a plan to create a new entrance to the School Lane parking lot from Hwy. 57 before the Sept. 12 town board meeting.

Just to make sure everyone understood the scope of the conditional use permit, town chair Don Sitte asked Mariah Goode, who is head of Door County’s Planning Department and also a Baileys Harbor resident, to explain that the bar/taproom in the designated commercial center is not subject to a conditional use permit and public hearing, but a brewery is.

The town board determined that public safety on School Lane is the town’s concern and has nothing to do with McMahon’s conditional use request.

“It’s the town’s responsibility to make things safe,” said Supervisor Roberta Thelen. “A lot of us support promoting business in our core and see this as a very positive move.”

The county Resource Planning Committee held a public hearing on Door County Brewing’s conditional use permit on Sept. 15. We’ll have details next week.

In other matters before the Baileys Harbor Town Board:

• Krista Lutzke of the Door County Soil and Water Conservation Dept., talked to the board about adopting a noxious weed ordinance as several other county municipalities have done, such as Jacksonport and Sturgeon Bay. Lutzke said her department has not had as much luck in seeking grants to continue the fight against invasives, partially because of the success they have already had in fighting invasives.

“We are in maintenance in terms of phragmites and wild parsnip,” Lutzke said. “We’re going up against other projects that are just starting. On paper, it appears the need for funding is elsewhere. So we are re-evaluating the direction of the invasive species program.”

Part of that is reaching out to municipalities about adopting ordinances that fine landowners who do not do something about phragmites on their property.

“We can do an inventory of your shoreline of any remaining phragmites and provide you with a list of those homeowners,” Lutzke said. “I’m pleading my case for towns to adopt an ordinance. I would hate to see years of work go for nothing. When you have a population of phragmites, it can expand exponentially within a year of not being managed. We would hate to lose the ground we have made in terms of management.”

She added that her department only has funding for its invasives program until December, and after that the program will rely on donations.

Sitte said the board will need some time to digest the information and would take the idea of a noxious weed ordinance up at the October meeting.

• Town resident Tim Tishler brought to the board data from a speedboard that was put up near his house at the downgrade on the south end of town on Hwy. 57.

“I was astounded that the majority of cars – almost 80 percent – are exceeding the speed limit,” he said, adding that it’s a miracle there hasn’t been a fatality.

The town agreed to send a letter to the Wisconsin Department of Transportation, asking that a stepped-down speed limit – from 55 to 45 to 30 – be placed on the southern approach to the town.