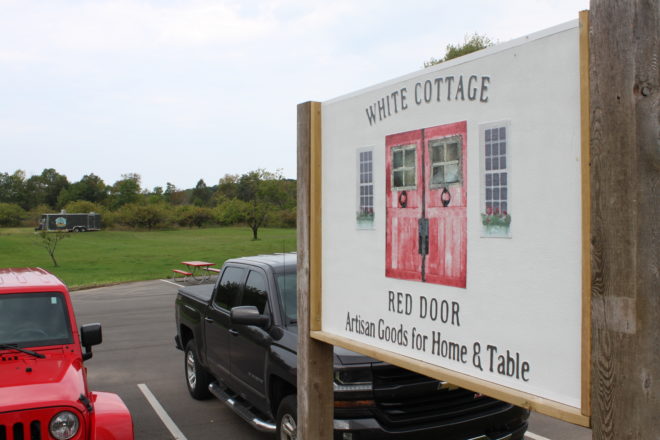 The food truck at White Cottage Red Door can be seen in the background, parked behind the building due to Southwest Florida Fest and Eagle Tower fundraiser taking place at the store on Sept. 30. Photo by Jackson Parr.

When the owners of White Cottage Red Door, formerly Ray’s Cherry Hut, purchased a food truck to park on their property next to the retail store between Juddville and Fish Creek on Hwy 42, they didn’t think twice about it. Lisa Howard and her brother Chris Hadraba had the proper state permits for operation of a food truck and received a permit from the county, the authority on zoning for the Town of Gibraltar.

But within one hour of opening, Gibraltar constable Andy Crowell was at the counter, telling them to shut it down. After seeing they had the proper permits, he left.

Now, the town board is demanding the county rescind the permit. It is another squabble in an ongoing fight between the town and the county planning department.

“Nothing says welcome to the neighborhood like we demand that you revoke their permit,” Howard said.

Howard and Hadraba said they were not notified that the town would consider action on their food truck permit at the Sept. 6 town board meeting.

Town board chair Dick Skare said the item was included on the posted agenda. The item was added one day before the meeting due to the Labor Day holiday.

While Hadraba and Howard were not contacted, board member Steve Sohns did ask other restaurant owners in the town to attend the meeting and speak on the topic.

The county planning department permitted the food truck as a principal use restaurant in the town’s general commercial zoning district. Since the food truck met setback requirements, parking requirements, and the county sanitarian signed off on the use of White Cottage Red Door bathrooms, the permit was issued. As a part of county comprehensive zoning, the town does not have much control over its own zoning, something that has frustrated town officials for several years.

In 2016, the plan commission held a public hearing where business owners complained of a cumbersome zoning process that required approval by four different groups of officials at the town and county level.

Rick Brauer, county zoning administrator who issued the permit, said he used the same considerations for permits given to food trucks at Dovetail Trading south of Sister Bay and at Welsing’s Foodland in Valmy.

On Sept. 19, the town approved sending a letter to the county planning department demanding the permit be retracted and stating it would pursue legal alternatives.

Skare said the town sent a copy of the letter to Hadraba and Howard, but the business owners said they were not notified of the letter being drafted prior to the Sept. 19 meeting. As of Sept. 26, they had not received the letter in the mail.

Town officials never communicated to the business owners that they were taking action against use of their property for the food truck.

At the Sept. 6 meeting, Skare cited a 1982 town ordinance that prohibits street hawkers and peddlers of food in the unincorporated Village of Fish Creek, but it is unclear whether the ordinance also regulates the rest of Hwy 42 or private property in the rest of the town.

Former Cherry Hut owner Ray Slaby, Jr. was chairman of Gibraltar when the peddling ordinance was adopted in 1982. He said the ordinance was enacted in response to people from outside the county trying to sell various goods on the sidewalks in downtown Fish Creek. He said it was not meant to prohibit businesses like the food truck at White Cottage Red Door.

At the Sept. 6 meeting a resident expressed concern about food trucks parking in the heart of the village. Sohns had similar concerns.

“I think we all ought to be concerned because we could have food trucks all over this town,” said Sohns.

However, the existing 1982 ordinance does prohibit food trucks anywhere in Fish Creek and the town would be able to regulate food trucks parked on any town property, including roads and parks outside of Fish Creek.

“There are actually people sitting and watching to see what the town board is going to do on this issue,” Hackbarth said. “If we do nothing there will be several more of these next year.”

In an interview following the meeting, Hackbarth declined to name any of the people or businesses he has heard want to operate food trucks in Gibraltar.

“I’m not trying to park it downtown Fish Creek in front of somebody’s restaurant; it’s on our property,” Howard said. “We took a building that was not very aesthetically pleasing anymore and paved the parking lot and put a lot of money… and we really haven’t had much of any welcome from the community.”

The letter, written by town consultant Bob Kufrin and signed by all five board members, argued that food carts are not a permitted use in the county zoning code.

“The County Zoning Code does not define, address, or permit food trucks, so any approval should be subject to written clarification with the Resource Plan Commission as a zoning text amendment,” the letter stated.

Goode said the planning department met about five years ago as food trucks were becoming more popular to decide how the county would regulate them.

“If the person that has the food cart wants to set it up on a property that’s zoned for a restaurant and meet all the setbacks then we would go ahead and call it a restaurant,” said Goode.

The letter from Gibraltar also requests the county differentiate between temporary restaurants and regular restaurants when considering building codes and sewer and water requirements.