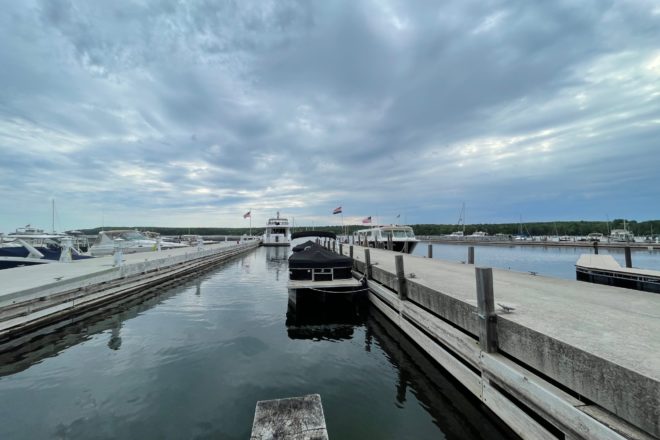 The Town of Gibraltar has asked the courts to order Alibi Marina to remove Pier 4 (at left) or discontinue its practice of docking transient boats on the east side of the dock. The town argues that those boats infringe on its riparian rights and limit the use of the town dock (at right) for pontoon-boat rentals and tour boats. Photo by Myles Dannhausen Jr.

The Town of Gibraltar has moored itself to a legal battle with a local business owner by bringing a suit against the owners of the Alibi Marina.

The suit stems from the town’s contention that North Point Marina, LLC, the owner of Alibi Marina, is using its easterly pier, known as Pier 4, for transient boat docking in a manner that inhibits the town’s access to its own dock that runs parallel to the pier.

The suit alleges that Alibi frequently uses Pier 4 to dock larger transient boats that are wide enough to infringe on the town’s riparian rights. The town argues that the practice makes it difficult for operators of pontoon and tour-boat rentals to use the town dock – an allegation that North Point denies.

“It’s an ongoing thing for many years with the riparian rights there,” said town Chair Steve Sohns. “They park all the big yachts there, and it limits what we can do on the east dock. When they have two big boats, we can’t get our boats in and out of there.”

Sohns said the town has tried to work out an agreement with Alibi but has not been successful.

The Department of Natural Resources (DNR) permitted Pier 4 in 1996, but the town alleges that permit was awarded in error. When North Point submitted plans to expand the Alibi Marina in 1996, Pier 4 was to be located 35 feet from the town’s riparian line. But before construction commenced, North Point requested approval from the DNR to build the pier 20 feet closer to the line, a change the DNR approved. The town alleges that this approval was made without informing any other interested parties or neighbors who could be affected by the construction. The town is arguing that because legal requirements for public notice and public comment about the change were not met, “the approval of the plan has no legal effect.”

Ed James, the owner of North Point and Alibi Marina, declined to comment on the lawsuit, but the Alibi did release a statement June 9 denying the town’s claims. In its response to the complaint, North Point denies that the permit was awarded in error and that its use of Pier 4 for transient boat docking infringes on the town dock.

Alibi operators also said the marina has never received a challenge from the DNR regarding the practice, and the DNR has declined to get involved in the matter.

“Twenty-four years of safe operation by the Alibi, as well as years of commercial use of both sides of the town’s west town dock attests to the fact that there is no interference,” reads the official statement from the Alibi Marina. “The Alibi has always cooperated with the renters and users of the town’s west dock, and no complaints have been made by the renters.”

The town filed the suit April 8, seeking to have the pier removed or bar the marina from docking boats on the east side of the dock. In its response to the suit, North Point affirms that it requested and received approval to construct Pier 4 in a different location than authorized under the original permit, but it denies that the dock was built illegally or that its use infringes on the town’s use of its dock.

This isn’t the first time in recent years that the town has found itself in a legal battle with a local business. In 2020, the town lost a lawsuit brought against it by the owners of White Cottage Red Door. In that suit, Judge Todd Ehlers ruled that the town’s ordinance prohibiting food trucks was unconstitutional. The town had ordered owners Chris and Jessica Hadraba, along with Lisa and Kevin Howard, to close a food truck they had opened on their property near Juddville.