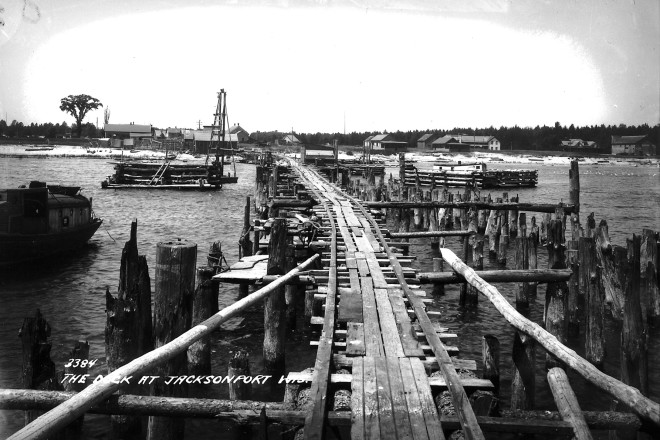 The old dock at Jacksonport, circa 1933. The town began in 1869 as a bustling provider of quality lumber. Commercial fishing operations soon followed. Today Jacksonport prides itself as being representative of the quiet side of the peninsula. Photo courtesy of the Jacksonport Historical Society.

What would Andrew B. Jackson think of the place that was named after him as it celebrates its 150th anniversary on Aug. 10?

Jackson and two other men – Col. C.L. Harris and John Reynolds – started the Jacksonport Lumbering Co. in 1867, two years before Jacksonport became the 14th and last township organized in Door County, on March 9, 1869.

The funny thing is, 1869 is also the year when Jackson left the community to live in Illinois. Yet his name lives on.

To pay respects to residents, town taxpayers will receive a complimentary picnic dinner (reservations have already been made). The public is welcome to come and listen to music, have a few drinks and view the fireworks at dusk.

At 6:30 pm, the nine-piece Fox Valley Band FBI (Funk Band Incorporated) and the Untouchable Horns will take the stage. The celebration will end with what Town Chair Randy Halstead said may be the first legal fireworks display in the town.