When Gibraltar residents opened their mailboxes in late June, they each found a four-page packet alerting them to the town’s road-brushing practices, which, according to the letter, have led to an excessive amount of tree cutting on the area’s most beautiful roads. 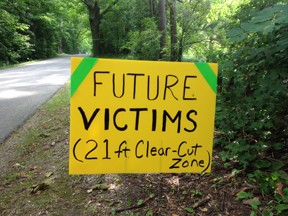 “Changes are being made that will affect this area, the Town of Gibraltar, for centuries and if nobody makes a stand then it will be too late,” Cozatta Helm said.

Helm was one of the four Gibraltar residents who wrote and mailed the letter. She’s one of many who appealed to town board supervisors asking them to reconsider cutting trees along town roads.

Of all the things a town’s residents and representatives have to agree on, finding a middle ground between maintaining roads and preserving their rural character seems to take center stage.

The issue has come to a head in Gibraltar over “brushing,” or cutting trees and shrubs on either side of the road, being done on segments of Cottage Row and Gibraltar Bluff road. What some see as ruthlessly and needlessly spending tax money to chop down trees, others see as a necessary tradeoff for keeping roads accessible and safe.

Finding a middle ground is key.

For Gibraltar Town Board Supervisor Dick Skare, road safety is important, especially as the town continues to promote itself as a destination for walking, running and biking.

“As we invite people into our area we have to make sure we have safe transportation routes,” Skare said.

Skare often walks along those roads, and said there are some intersections and areas where the trees do get in the way of visibility. He noted the signs residents displayed along the sides of the road, which say “Future Victims” and point to trees slated to be cut. 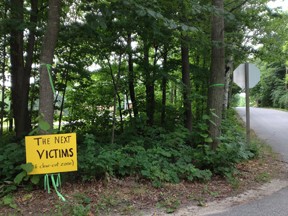 “I’d much rather have the next victim be a tree,” Skare said. “That’s kind of the bottom line for me.”

But Helm, who has lived on Gibraltar Bluff Road for almost 20 years, doesn’t see it the same way. She said safety isn’t an issue because Gibraltar Bluff Road doesn’t get enough use to warrant cutting any of the old cedar trees growing along the road. Besides, widening roads and increasing visibility may encourage people to drive faster.

“If people choose not to obey the traffic laws or choose to drive when they’ve been drinking, we can’t prevent that,” Helm said. “Taking down the trees is not the solution to safety on this road.”

More than anything, Helm said she just wants to be heard. She’s addressed the Gibraltar Town Board, written letters and circulated a petition asking them to cease and desist tree cutting until they write a policy that sets standards for maintaining roads.

“We asked to get some citizen input informing this policy, that was in June,” Helm said. “[The board] doesn’t respond to public comments, they just listen, and it’s very hard to get information back from them.

These decisions are everlasting and they need input from various people … [I want] to get all sides represented, and it doesn’t seem right now we’ve been able to get a response from the board that they are really taking us seriously.”

Skare said he would have handled the brushing controversy differently if he were town chair. He would have given residents more of a warning of upcoming brushing, and held public discussion about the practice.

“I would have handled it differently,” Skare said. “I believe in discussion and openness. You may disagree with someone but they should have the opportunity to express themselves. There’s a lot of folks out there I disagree with – safety is the issue and should be a primary goal.”

Helm wants Gibraltar to follow the example of Liberty Grove’s town board. Liberty Grove went through two years of prickly discussions at public hearings before the board supervisors could move ahead (with a close 3-2 vote) to repave and widen Isle View Road, and the town’s brushing policies were in the forefront of the controversy. The town is now having similar debate over repaving and widening Garrett Bay Road.

Liberty Grove developed a Heritage Roads program to classify certain “rustic” roads under a different maintenance policy, and spent time meeting with an arborist and residents along Isle View Road to talk about which specific trees will be cut.

But even up north, some residents don’t think the Liberty Grove board has gone far enough to preserve trees along the roads.

“There is a suggested policy, a supplemental guideline, for maintaining Heritage Roads,” said Kelly Mazeski, president of the Northern Door Neighbors Association. “I’d like it to be mandatory for Heritage Roads.”

Ideally, Mazeski would like repaving and maintenance projects to keep the same width of the road, shoulder and clear zone along the sides of roads.

Town Chair John Lowry said the town brushes roads to make them easier to plow in the winter and to increase visibility. Besides, people had to cut down trees to build houses and roads in the first place.

“You could make the roads all s-curves all the way through, but people wouldn’t like that either,” Lowry said. “It’s all a tradeoff… I think for the most part the town is listening to the concerns and trying to do as best we can within the elements of safety and good road construction, then taking into consideration the natural environment that’s there as well. We could exercise the full authority we have and make a superhighway out of it but we’re not going to do that.”

Back in Gibraltar, Helm has ideas of how the board should proceed. Ideally, she’d like the board to stop tree cutting and form a committee to create a policy for road maintenance. As a compromise, she’d just like more selective tree removal.

“I think certainly overhanging branches in the road [should be cut],” Helm said. “If there are any to block vision I certainly think they should be removed. I think it needs to be taken into consideration how long it took those trees to get there and what you’re getting from removing them, because they cannot be replaced. When they’re gone, they’re gone.”