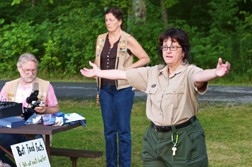 As the sun set over Green Bay on July 21, a crowd gathered in Peninsula State Park to see the evening show.

This wasn’t American Folklore Theatre. It was a performance of nature that takes place throughout the summer at Welcker’s Point, when hundreds of bats fly out of the bat houses on Welcker’s shelter building into the woods for their nighttime feast.

Peninsula State Park staff and volunteers are surveying bats in Door County to see what species call this area home. They use an Anabat, a hand-held tool that picks up the high frequency sonar of bat calls, tracks them using radar, and identifies the species. The Wisconsin Department of Natural Resources (DNR) loaned the tool to the park.

To track nearby bat species trained volunteers take the Anabat through the woods, and walk at a steady pace for at least an hour. The information saved on the tool is loaded onto a computer, and the DNR makes maps that show which species of bats were heard along the route.

“Last time we were out I never saw a bat, but we heard tons of them,” said Bill Custer, a park volunteer. He and his wife Wendy Nelson come up from Atlanta every summer to volunteer on citizen science projects at the park. They helped Harris with the presentation July 21 at Welcker’s Point.

This is the first time an extensive bat survey has been done in Door County, and after surveying in Peninsula State Park, Toft Point, Rowleys Bay and other places, they have detected species like the Little Brown, Big Brown, Eastern Red, Northern Long-eared and Silver-haired bats.

Studying the county’s healthy bat population is important because a fungus has ravaged bat populations in much of the southern and eastern United States and Canada.

The phenomenon is called White-nose Syndrome. It first showed up near Albany, N.Y., in 2006 and has now spread as close as southern Illinois, Iowa and Ontario, Canada.

White-nose syndrome has killed more than 1 million bats since 2007, according to the U.S. Fisheries and Wildlife Service. Bats with the syndrome have low body fat and do strange things like wake up during their hibernation to search for insects that have disappeared for the cold winter.

Since scientists don’t know how White-nose Syndrome is spread, it’s tough to keep it from moving. Some caves around the country have been closed to visitors and scientists, who could play a role in spreading the fungus. 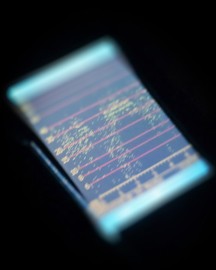 “It’s part of a bigger effort to preserve an important set of species,” Harris said.

Low bat populations aren’t just a problem for wildlife and vampire enthusiasts. Little Brown Bats, common in Door County, can eat up to 1,000 mosquitoes an hour. Bats also eat pests that feed on farm crops and reduce the need for pesticides.

“Bats are our friends, they eat tons of mosquitoes and other insects,” Custer said.

Harris likes participating in the bat survey for more reasons than learning about the important creatures. She said the Anabat tool helps broaden the survey’s appeal to a wider audience that appreciates technology and the outdoors.

Having the Anabat also made for an extra attraction at Welcker’s Point. As bats sped out of the building toward the woods, it seemed they narrowly missed flying into the crowd. Brave children inched closer between bats, and backed away when each one took flight.

As the crowd watched and muffled shrieks when bats got too close for comfort, Custer was tracking the different species with the Anabat. Park visitors crowded around to see the frequencies change as bats flew by and learn about the set of species worth preserving.