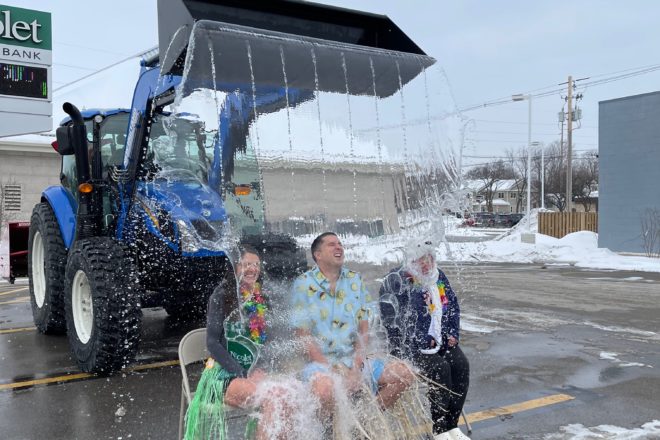 Three people – two of them wearing grass skirts, the third wearing an “Unbearable” T-shirt and a polar bear hat – sat in chairs in the parking lot of Nicolet Bank’s Fourth Avenue branch in Sturgeon Bay. Poised above their heads was a tractor bucket filled with icy water.

It was a balmy 20 F with cloudy skies. A crowd of onlookers, appropriately clothed in winter coats and hats, chanted the “1-2-3” countdown, and tractor owner Todd Maas released the bucket arm to dump the water on the three. It wasn’t a quick thing, relatively speaking, as in pulling off a Band-Aid. The water cascaded, rather than dumped, for a good five seconds or more.

The dumpees were Jamie Alberts, Paula Englebert and Paula Wiese, whose bold stunt helped keep alive the spirit of the Polar Plunge fundraiser for Special Olympics Wisconsin. Traditionally held annually in Green Bay, the fundraiser was canceled this year due to the pandemic. Instead, Nicolet Bank suggested a company-wide Ice Bucket Challenge. The Fourth Avenue branch, as demonstrated, upped the ante with a 100-or-so-gallon bucket.

“We feel strongly about supporting our community and customers, Special Olympics and Stacey Vogel,” Englebert said.

Vogel – the agency manager for Door County Special Olympics – recruits athletes and volunteers and sets up programming in the county. She looked on as the three filed out of the comfort of the building to sit on aluminum chairs, a bit of grateful incredulity detected in her eyes.

None of the three had ever done a Polar Plunge before, but Alberts persuaded his coworkers (and himself) to participate in the dousing. That’s probably how he became Wisconsin’s No. 1 fundraiser for Special Olympics. As of last Friday, he had already raised $5,000 from what he described as “the best customers on the planet.”

“This was just an ask,” he said. “They were just very generous in supporting this great cause today.”

Alberts also told his customers that if he could raise $2,500, he’d wear a grass skirt on his birthday. It all developed from there. After the drenching, and wrapped in warm blankets, the trio returned to the building, where a 40th birthday cake and celebration greeted Alberts. Since 1999, Polar Plungers and their supporters have raised more than $20 million for the 9,000-plus Special Olympics Wisconsin athletes. The donations support 19 Olympic-type sports that are offered year-round, including the National and World Games, as well as free health care screenings to help ensure optimal health and performance during the competitions.