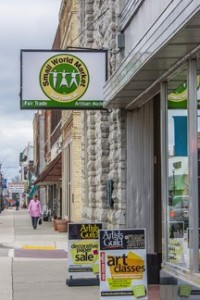 A number of businesses on Sturgeon Bay’s Historic Third Ave. are just now finishing up a round of building swaps that began last September, when Artists Guild and Small World Market moved from their respective old locations at 117 and 139 N. Third Ave. to the old Harman building at 215 N. Third Ave.

The move opened up a lot of space for Artists Guild to expand its retail space and its offering of classes, and according to owner Jeff Bradley it also opened up some larger spaces for other Sturgeon Bay businesses.

“At that point Mike Dal Santo [of Trattoria Dal Santo] decided to relocate, so we leased the [old Artists Guild] property to him,” said Bradley. “Then Cornucopia decided they wanted to come down from Jefferson St.” 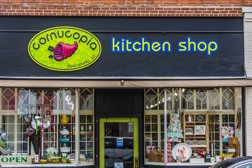 “We loved the quaint little house we had and our neighbors on Jefferson Street, but we just needed more space,” said Herlache. “And we only wanted to move once.”

The new Cornucopia Kitchen Store is twice as large as the old one, giving Herlache and Hauser space to spread out their merchandise. Herlache said having large storefront windows to display their merchandise and draw in customers has also been a boon.

The duo said the customers they had on Jefferson St. have followed them to Third Ave., and they’re seeing a lot more foot traffic as a result of changing locales.

“Being on Third you get a lot of people that might not be actively seeking you out that can now find you,” said Herlache.

“Everyone has said they love the new space,” said Hauser, “even people who loved the old store and were nervous [about the move].”

Italian restaurant and steakhouse Trattoria Dal Santo closed down their old location and took over the old Artists Guild space in November of last year, and they’ve spent the last five months renovating the building. Owners Tammy and Mike Dal Santo said they’re hoping to be able to re-open sometime in May.

“We’re getting closer every day,” said Mike. “It won’t be very long, but it can’t be soon enough.”

“The phone’s ringing non-stop, and we’ve got lots of people emailing us,” said Tammy.

The couple put up a Facebook page and created a Twitter account to keep their customers updated on the restaurant’s progress. Tammy said customers can expect the same food and service from Dal Santo’s when it re-opens. 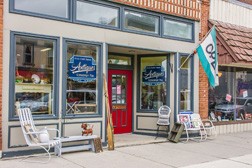 “It’ll be the same staff, the same menu, the same management,” she said. “Further down the road we’ll be offering new features and specialties.”

The Door County Traders antique and resale mall recently took over Dal Santo’s old spot at 147 N. Third Ave., increasing the space available to them from 1,400 to 6,000 square feet. Owner Diane Rockwell said she’d been having to turn away consigners at her old location, but has plenty of space at her new one.

“I’m selling stuff left and right so I have space,” said Rockwell. “And I’ve had lots of inquiries in the past couple days since we opened.”

The new Door County Traders location has been open since April 20, thanks to a number of friends who helped Rockwell and her husband move antiques between locations. Rockwell, like all the business owners interviewed, is excited to be moved into her new digs, and she’s excited to be selling on Third Avenue.