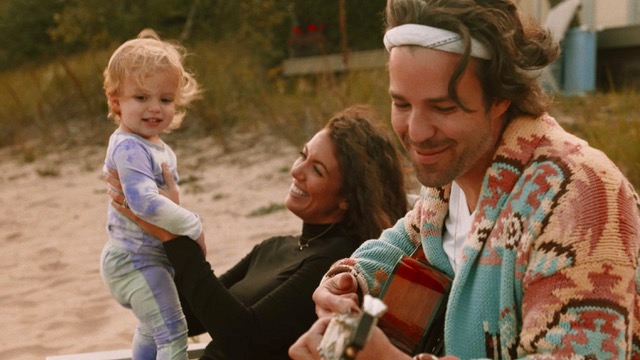 Musician Todd Carey has come full circle to call Door County home after his career in pop music has taken him to Los Angeles, Chicago and New York City

When COVID-19 started to make headlines in January, musician Todd Carey was about to set sail on a cruise ship to perform with the Grammy Award-winning band Train: what he described as a centerpiece of his career so far.

Leading up to the trip, he’d been releasing new singles in anticipation of dropping his first album in four years, and he was looking forward to a full summer of touring. He and his wife, Lindsay, were living and working in New York City and raising their nearly one-year-old daughter. Life was moving at high speed.

Then, just as they were back on dry land following the cruise, COVID-19 cases in New York began to climb.

“We finished the cruise, had about a week at home and then it was lockdown in NYC,” Carey said. “We were at fever pitch, then all of a sudden, nothing: Tours canceled; Lindsay is at home; our day care closed.”

As the weeks of quarantine went by and the seriousness of the situation set in across the country, the couple began to come to terms with the new reality and to reassess.

“It took a second to let the touring go,” Carey said. “But once I realized it was real and not going anywhere, we felt like we had another chance to be with our baby. It was like a gift – except we were in New York at ground zero for COVID-19.”

With Lindsay’s job having gone remote for the foreseeable future and a baby who was quickly becoming more active, they set their sights on Door County, where Carey’s parents are seasonal residents.

During the summer of 2019, the couple had lived in Whitefish Dunes for a month when they married in the county, so they weren’t unfamiliar with the stark contrast between the peninsula and the big city.

“That month was kind of like being in the eye of the hurricane,” Carey said. “My career had recently been a lot of touring, a lot of concerts, and NYC is go, go, go, so it felt like this calm inside a storm.”

That calm was exactly what they were seeking. In May, the trio packed up and made the two-day drive to Door County, and in the time since, they’ve realized it’s a permanent move.

According to Carey, Door County has felt like home for a while now. He’s been playing music in the county since his youth, having spent summer months here with his family, then returning to play for his friends.

“I was super shy growing up,” he said. “I wasn’t an exceptional student or sports player, but my friends encouraged me to bring the guitar to the bonfire. So I grew up learning to play music on the beaches of Door County. And then later, as I grew up – living in LA, Chicago and then NYC – I was still playing music for my friends in Door County at the Hitching Post, and then Steel Bridge, and then Husby’s.

“Door County has been the thread through it all, and it’s been nurturing to keep coming back here. Being in the music business, it’s so hard. It can be so cutthroat, and the business is always changing. But Door County has always been there for me musically.”

Carey’s last album release was in 2016, and it included his hit single, “Nintendo.” The music video for that song debuted before the album and earned more than 1 million views on YouTube, helping to set up the full-length album Future Throwback to debut in the Apple Top 20.

Since then, Carey has been touring and sharing stages with the likes of The 1975, Fall Out Boy, Micheal Franti & Spearhead, Andy Grammer and Matt Nathanson, plus working on a new album that he says is like his thesis statement as an artist up to this point.

The new album, Feel Good, was released officially Oct. 2 and features collaborations with singer-songwriter Jake Miller and rapper Shwayze. It was a multiyear process to bring the 11 tracks together, and the final two songs were written here in Door County.

One of them is the opening track, “Wanna Be,” which chronicles Carey’s family’s journey to Whitefish Dunes and highlights that even amid the uncertainty of the world, Carey feels he’s right where he wants to be.

The album keeps an upbeat energy, but it differs from his past work in that it’s more mature lyrically. There are songs that deal with marriage and longevity, and the album reflects his more recent approach of writing songs that are true to his life rather than what makes a good pop-song narrative.

The authenticity of the album is wrapped up with the final touches completed here in Door County: Carey filmed the video for “Wanna Be” on the beach in Whitefish Dunes, in their new home and in some areas of Door County that many will recognize, such as Valmy’s Foodland and Whitefish Dunes State Park.

During a 2020 in which the pandemic had never happened, Carey thinks the album would have been more rushed, in anticipation of going back on tour in the summer months.

“The idea was to have it released closer to spring so I could go on tour,” he said. “But when the deadline went away, I was able to be more thoughtful. The collaboration with Los Angeles’ Schwayze and Jake Miller wouldn’t have happened if I were to have rushed it.”

Although live music performances are a thing of the past for now, Carey is grateful that his big life change has been mostly positive.

“I’m connected to my fans more than ever – through livestreaming, the texting app I get to talk to my fans, and Instagram … but nothing can replace that feeling of playing to people in the room. But I’m a glass-half-full type of guy. I know that will come back in due time. I’m just appreciating this time I have with my daughter – time with my family – and it doesn’t rip me away from what I love to do.”

Now that this album has been released, Carey feels as though he’s closed a chapter and is excited to go in a new direction.

“This album feels to me like the conclusion, the period, the exclamation point of the fun-pop Todd Carey. It’s witty, upbeat, fun party pop music with an edge. It’s like I’m tying a bow on it and setting myself up for a new direction.”

Every November Saturday at 3:30 pm, you can tune in to a livestreamed concert by Todd Carey, who will be playing at Piranha North Studio in Sturgeon Bay. Each livestream will consist of four multicamera broadcasts and will be free on all major social networks. Each performance will send a portion of donations and merchandise purchases to a charitable organization.