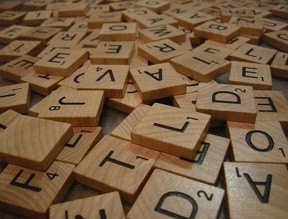 Matt Lauer reporting on Macy’s Thanksgiving Day Parade’s newest balloon or newest pop group lip-synching on the Sesame Street float is what I wake up to Thanksgiving morning. My sister Holly never strays far from the television; she doesn’t what to miss the Broadway numbers. My sister Sara is usually corralling one of her three children while my sister Tracy flips through the thick newspaper to check out the Black Friday deals.

We eat, eat, eat. We watch football if the Packers are playing. We eat some more. We mingle and catch up. We eat some more. And we partake in a few traditions, always a fast-paced game using Scrabble tiles: Take Two. Try it out with your family this year!

Anywhere from two to three to four to five to six players can participate in this game; even seven or eight if you double up on the Scrabble tiles.

First, place all the tiles face down in the middle of the table. Everyone begins with five tiles.

Everyone flips over the tiles at once and begins constructing a Scrabble grid. Whoever uses all their letters successfully shouts, ‘Take two!’ Every player has to grab two more tiles and continues to try and create a grid using all their tiles.

Play continues until there are no more tiles left to draw.

My Peninsula Pulse coworkers have a few other traditions they are sure to partake in every year:

“The only thing I remember doing on Thanksgiving was my uncle would take all the kids outside to play soccer while we were waiting for the turkey to finish cooking. This doesn’t sound too exciting, but I loved it when I was little. It also helped tire us out.

Another thing I noticed from celebrating Thanksgiving with my boyfriend’s family was if the Packers are playing that day it’s completely acceptable – and sometimes mandatory – to wear Packer apparel to Thanksgiving dinner. I was the odd man out my first year because I was the only one not in green and gold – everyone else was clad in those colors from a tiny baby to the 92-year-old great-grandmother.” ~ Alissa Ehmke

“This isn’t really a ‘game’ so to speak, but my mom used to put a random number of candy corns on the edge of everyone’s salad plates. Then, for each candy corn on the plate, you had to name one thing you were thankful for.” ~ Madeline Harrison