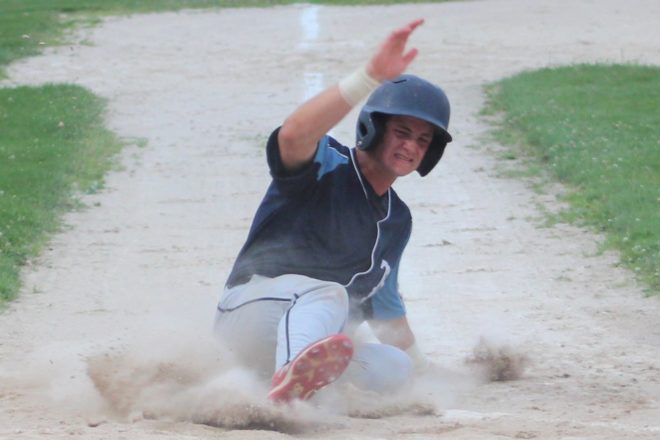 The Ahnapee Trailblazers closed out their regular-season Legion baseball schedule Monday with an 8-3 victory over the Wrightstown Rockets at Perry Field in Algoma.

Jack Peterson, who scored half of Ahnapee’s runs, batted 3-3 with two singles and a home run. He also reached base on an intentional walk.

Peterson gave the Trailblazers a 1-0 lead in the bottom of the first when he scored on a sacrifice fly by Spencer Krause.

The Rockets took a 2-1 lead in the third inning on a two-run homer by Riley Leick off Ahnapee starting pitcher Tyler Neinas.

The Trailblazers regained the lead in the bottom of the third. Luke Steebs led off with a double and scored on a single by Peterson, who reached home on a walk for a 3-2 advantage.

Peterson homered in the bottom of the fourth to give Ahnapee a 4-2 lead.

After the Rockets picked up a run in the top of the sixth to pull within one with Trailblazers reliever Carson Leist on the mound, Ahnapee pulled away with four runs in the bottom of the inning.

The Trailblazers used three pitchers, with Neinas throwing the first three innings, Leist on the mound for the next three innings and Krause closing out the seventh inning.

Ahnapee enters this weekend’s AA Regional Tournament at Ashwaubenon’s Klipstine Park with an overall record of 10-6. The Trailblazers, who won the 2021 regional, are scheduled to open this year’s tournament at 2:30 pm Friday against Kewaunee County, a team they defeated 6-2 last month.