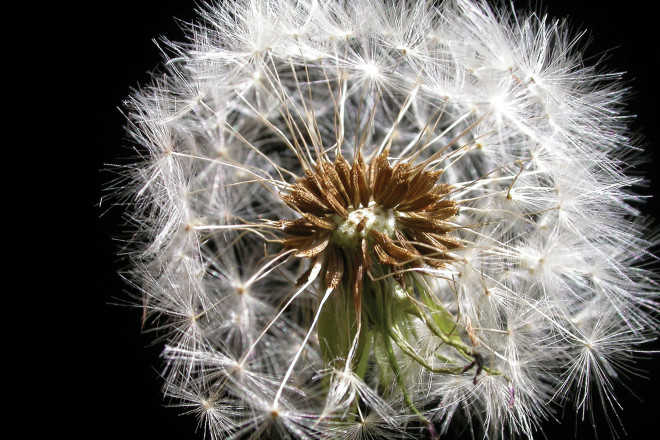 A plant that Mother Nature scatters to the rich and poor alike, a notorious weed that has so many ways of getting ahead of us, is unquestionably recognized by more people than any other flowering plant in the world. It’s the “tramp with the golden crown,” the “lion’s tooth,” the scourge of suburban homeowners, the Dandelion. They flourish despite our determined and often expensive efforts to exterminate them. Considered to be one of the most successful plants on earth, Dandelions in your lawn may be a great trouble to you until you learn to love them. 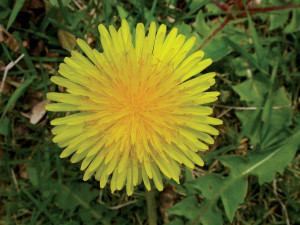 Our friend Spencer Gould, fluent in French, told us how to pronounce the word Dandelion in French. Phonetically it sounds something like “DON-day-lee-OWN” and essentially means “tooth of the lion.” Examine a leaf and you will see that the margins are sharply toothed and deeply indented, like miniature lion’s teeth.

It makes me “smile out loud” to see, on the one hand, how vigorously and religiously some people attack Dandelions growing in their expansive, painfully manicured, butterfly and bird-free lawns and then, on the other hand, for us to watch Indigo Buntings and American Goldfinches and Chipping Sparrows feast on one dandelion seed after another growing and “smiling up at us” in our tiny front lawn next to our large flower beds. Even brother Cottontail relishes entire Dandelion stems, eating one after another of them like stiff strands of spaghetti.

For centuries the medicinal and food values of this successful plant have been known. Its genus name, Taraxacum (ta-RAX-a-cum), is from the Greek, meaning a remedy for disorder.

The species name of our most common Dandelion is officinale (of-fish-i-NAH-lee). Plants with this name, and there are many, are included in the official list of herbs used by druggists and pharmacists. It is a known fact that many thousands of pounds of Dandelion roots are imported to this country annually for use in the production of tonics and liver medicines.

Years ago the common shortage of fresh greens during winter months caused many people to suffer vitamin deficiencies by the time spring arrived. The earliest rosettes of Dandelion leaves served as practically a miracle food to those people. Some consumed the leaves raw while others ate theirs cooked. In past years some of my friends raved about the plant’s value as a spring tonic. They picked the very young leaf rosettes, washed and cut them up, put boiling water over them in a kettle and cooked for several minutes. After draining and cooling the greens, they served this delectable and free plant with a sweet-sour dressing garnished with bits of crisp bacon. 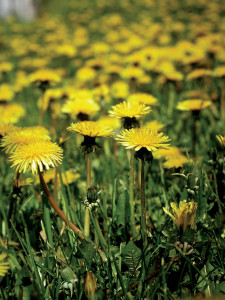 A good friend of mine years ago in Kewaunee, Art Koudelka, made the most delicate and delicious Dandelion wine one could ever expect to put to his lips. Art and his wife would pick over a large Dandelion patch carefully choosing only the biggest and ripest blossoms to gather. Flower heads usually require at least an hour or more after sunrise to open, and they remain open for around five to six hours before slowly closing in another hour. A good recipe for making Dandelion wine can be found in Stalking the Wild Asparagus, by Euell Gibbons (or see Door County Living’s own recipe on page 17 of this issue).

This unassuming plant, whose flower heads close at night and on overcast days, opening only on sunny days, reproduces from seed and by new shoots from the root crowns. Where people live, cultivate fields and gardens, grow lawns and tend golf courses, there you’ll find the dandy Dandelions in greatest numbers. They tend to reach a peak of flowering in late spring to early summer, then again in early fall. However, their leaf rosettes continue to thrive all summer, gradually building up strength in their exceedingly long taproots with some easily reaching a foot in length.

My wife Charlotte and I located a large field adorned with thousands of miniature radiating “suns” in full bloom, smiling upward toward their zenith, and made some amazing measurements in their growth with a few general numbers. We figured there to be approximately 36 Dandelion plants, each having 20 flower heads, per square yard in the field we studied. This amounts to about 720 Dandelion heads per square yard. There being 4,840 square yards per acre amounts to 193,600 square yards per 40 acres. Consequently that figures out to be 3,484,800 Dandelion heads per acre and 139,392,000 heads per 40 acres!

I carefully took one mature seed head apart at home using a tweezers and found there to be 263 seeds in the head, each seed with its own beautifully structured and attached ultra-light parachute. Multiply the number of seeds per head by the number of heads on 40 acres and you come up with a potential of 36,600,096,000 Dandelion seeds being produced on a 40-acre field, billions of them! No doubt the child in you comes out, as it does in me, with the irresistible urge to pick a fully-developed seed head, hold it toward the sky and blow every one of the seeds to their air-borne freedom.

A gentle spring zephyr will have the air filled with uncountable parachute-carried Dandelion seeds which, in order to germinate and grow, must find some disturbed, sun-drenched ground where competition from other plants is at a minimum – for example, our garden. The extremely tiny barbs covering a seed will enable it to get a good foothold in the soil. Allowed to germinate and survive, its taproot will steadily grow downward becoming stronger and a little longer each year. Naturally we try to dig them out fully realizing that the tinniest section of one root allowed to remain in the ground will develop into a new flowering and seed-producing plant before you know it.

Visualize a Dandelion-studded lawn 50 feet by 50 feet and you could expect the seed production to reach a little over 14 million. Considering the thousands of “gardens” of these yellow dandies in a county, plus the manner of floating their seeds away through the air with the greatest of ease, there should be little wonder why this flower has become such a mainstay in our relatively young country.

If you wish to get away from these brilliant yellow flowers, you’ll have to move to either extreme southwestern Arizona or southeastern California, about the only areas in our country that to date have not been bitten by these “Lion’s Teeth.” We might just as well get used to them because they’re here to stay! 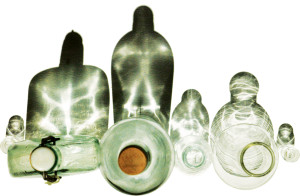 “Every year,” said Grandfather. “They run amuck; I let them. Pride of lions in the yard. Stare, and they burn a hole in your retina. A common flower, a weed that no one sees, yes. But for us, a noble thing, the dandelion.”

So, plucked carefully, in sacks, the dandelions were carried below. The cellar dark glowed with their arrival. The wine press stood open, cold. A rush of flowers warmed it. The press, replaced, its screw rotated, twirled by Grandfather, squeezed gently over the crop.

The golden tide, the essence of this fine fair month ran, then gushed from the spout below, to be crocked, skimmed of ferment, and bottled in clean ketchup shakers, then ranked in sparkling rows in cellar gloom.

The words were summer on the tongue. The wine was summer caught and stoppered.

For the last eight years, at the time when birds start waking up early to chirp about freshly thawed nightcrawlers, a dog-eared paperback of Ray Bradbury’s Dandelion Wine has been pulled off my shelf. It is my favorite book – about a single timeless summer for a 12-year-old boy on the precipice of understanding the many rites and revelations of growing up. Among these is the discovery that the years in our lives not only add up, but they are also finite. The catalyst of this, as well as the thunderhead of his inevitable slipping from childhood, is his grandfather’s annual brewing of dandelion wine.

Growing up, my family didn’t brew any variety of country wine. What we did have were canned goods which captured a little of the summer, especially a tart, deep-violet grape jelly from our tangle of vines in the backyard. After the fifth summer of reading Bradbury’s masterpiece, I wanted to taste even the smallest sip of that magical childhood he described, not just a literary distillation. I wanted to make that legendary elixir from the weeds in the front yard.

After consulting with friends who homebrew and amateur winemakers, I reviewed my techniques and compiled a recipe.

2 quarts freshly picked dandelion flowers, removed of all green material (May and June blossoms are apparently the best.)

Wash and clean the blossoms well. Place the blossoms in the four quarts of water, along with the orange and lemon juices, and bring to a boil. Stir in the ginger, cloves, orange peel, lemon peel, rhubarb and sugar. Bring the mix to a boil for an hour.

Put the yeast in the bowl of warm water to dissolve. Strain the “blossom tea” through paper filters and let it cool. When it is just warm, stir in the yeast mixture.

Leave it alone and let stand overnight at room temperature.

Pour liquid into a crock and store it in a warm, dark place, covered with a cloth for at least three weeks so that it can ferment (homebrewers can do this in a glass carboy with an airlock).

At the end of three weeks, funnel or siphon the wine into bottles, leaving behind any sediment. In Bradbury’s sleepy world, they used washed ketchup bottles, but re-sealable flip-top bottles work perfectly. (Note:  As in any homebrewing endeavor, be sure to clean and sterilize all bottles, funnels, etc.)

Cork and store the bottles in a cool place. Now for the hard part:  Allow the wine time to age. Waiting for six months to a year may sound like an eternity, but by then a taste of summer will sound so much better when the snow is once again creeping up the windows.

Bradbury inherently understood from reflections on his grandma’s suppers, from picking wild berries, from simple deviled ham sandwiches, and from thimbles of flower wine that memories of taste can bring one back to another time like nothing else. Dandelion Wine is, in fact, a story of the most mundane and most magical science fiction. It’s real-life time travel. Unlike his famous short story, “A Sound of Thunder” – which takes place in a world where big-game hunters travel back in time to shoot dinosaurs, and even an accidentally-crushed butterfly can affect the future dramatically – there are true time machines simply in a sip, a bite, a book. They take us back just as effectively as any trans-dimensional time machine. So, sip thoughtfully and, just to be safe, avoid stepping on butterflies while picking those flowers.