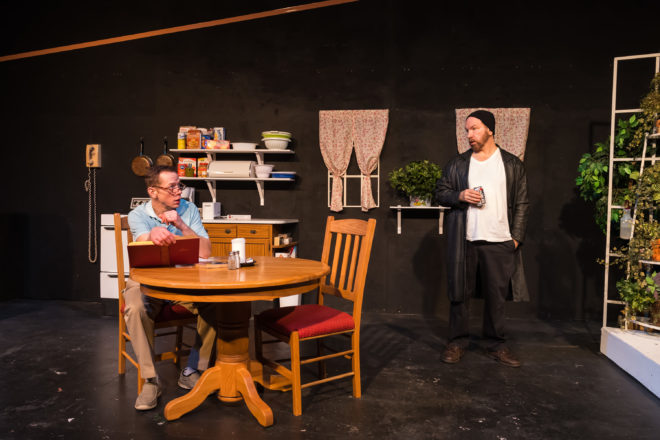 In the nearly six years since James Valcq and myself have taken over the leadership of the Third Avenue Playhouse (TAP), it has become a significant regional theater in the state of Wisconsin known for the quality and excellence and diversity of its programming. Our actors come from Milwaukee, Chicago, New York, and Minneapolis in addition to the very fine local talent we have here in Door County.

For the past two years, TAP has been honored by the Milwaukee Journal Sentinel as one of the top 10 theaters in the state, putting us in the rarefied company of the Milwaukee Rep, Forward Theater in Madison, and American Players Theater in Spring Green. But our biggest honor is to see people return again and again and again, bringing with them new people to see and experience what it is we do right here on Third Avenue in historic downtown Sturgeon Bay.

Needless to say, it has taken a lot of hard work to get this far.

When we arrived here almost six years ago in the fall of 2011, James and I inherited an organization that was struggling to survive. TAP had just celebrated its 10th anniversary the year before and managed to reach its eleventh, but by the time we arrived it didn’t look as if would ever see 12. It was an organization in crisis.

That TAP managed to survive into its second decade was due in no small part to the diligent work of its founders, directors and board members who worked extremely hard to keep TAP going under enormous odds. Money was (and still is) very tight. There were many expensive necessary repairs and upgrades made to the building, and a small staff to maintain. Donations from loyal patrons and grants helped keep things going (along with ticket sales) but as the years went on it simply became tougher and tougher for TAP to keep its head above water.

For some reason, this did not deter us. We had spent the better part of our adult lives working in New York pursuing careers in the performing arts. We were well accustomed to the economic and emotional highs and lows of the business. I could be on Broadway one week (and was) and waiting tables the next (and did). For every 50 jobs I went after, I could count myself lucky if I received a couple of callbacks. If one of those callbacks resulted in a job, I felt as if I had won the lottery. Rejection, however, was the norm. I learned very quickly that if I wasn’t able to take rejection and move on then I’d better find another profession.

Collectively, James and I have accumulated more than 50 years of being in the trenches of show business. By the time the offer came to take over the leadership of Third Avenue Playhouse, it felt like the right time to make a big change in our lives. How many times were we going to get the opportunity to take over and lead a theater company? It was an offer too intriguing and challenging to refuse.

We looked upon TAP’s troubles as an opportunity to turn them into assets.

Although TAP had a very loyal group of followers, we soon discovered there was a much larger group of people who had no interest at all in what was being presented, or (even worse) there were many more people who didn’t even know TAP existed.

It became very clear that if TAP were to survive, this perception would have to change.

We first turned our full attention to programming. In the past there was no coherent and consistent focus on its programming or in its scheduling. Was it a community theater? Was it a concert hall? Was it a children’s theater? Why was there so little programming presented in the summer months? What was TAP and what did it need to become in order to survive?

And the biggest question of all: Who was not coming to TAP? And why?

We wanted people to come to the Third Avenue Playhouse knowing that what they would see here would be of consistent quality and interest. James likes to say the two best compliments we receive are 1) I loved this show, and 2) I didn’t care for this show but I can’t wait to see what you do next.

We created a professional theater company, which began performances in June of 2012, and we have been going ever since, doing six to eight productions throughout the year from March to December. Audiences have grown and keep growing from year to year. We have a thriving educational theater program serving students from all over Door County from elementary through high school. We still do occasional concerts and other special events. Our primary goal is to ensure that everything we do is done with a special attention to the quality of each and every production and event on our stages.

We are so fortunate to live in a community rich with artists of all stripes: visual, musical, literary and theatrical. It is extremely rare for a community the size of Door County to offer such a wide range of artists to its residents and visitors.

If you love attending the theater and haven’t seen one of our productions, I happen to know you are missing out on one of the great cultural attractions in Door County. Don’t just take my word for it. Ask anyone who has been to TAP recently if they would go again. I’d lay odds that the answer will be an enthusiastic “Yes!”

So, come on down to Sturgeon Bay. Have a bite in one of our great restaurants, stroll down historic Third Avenue, do some window-shopping or even better, some actual shopping, and take in an evening (or a matinee) at the Third Avenue Playhouse.

If you do it once, I know you’ll want to do it again. See you at TAP.