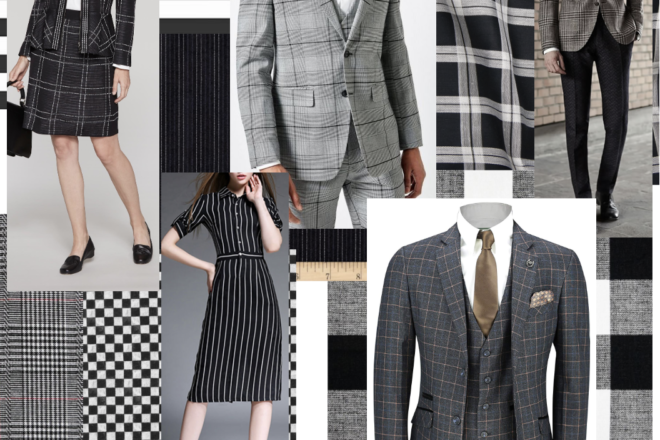 Pingel put together this mood board for King Charles III. Mood boards serve as a brainstorming tool early in the design process.

When you attend a show at Peninsula Players Theatre, the first thing you’ll see when the actors enter the stage may be Kyle Pingel’s artistry. If you’re an avid theatergoer, you’ve seen perhaps hundreds of pieces that Pingel has created and maybe never even noticed. Often that’s by design.

“There is a lack of recognition that designers get,” Pingel said, “because when everything looks perfect, and nothing takes you out of the element, and [everything] really sucks you in, the audience forgets that the show was designed.”

Pingel graduated from Chilton High School, south of Appleton. Like many high school students, he had no idea what he wanted to do next. Rather than jump right into college, he took a few years off and found himself in a production of Joseph and the Amazing Technicolor Dreamcoat at a new community theater. Pingel was 21 years old at the time, and his director was 18.

“That put a little fire under my butt,” Pingel said. “It doesn’t matter how old you are – you can still go to school and be in theater.” That next fall, he started studying performance at Fox Valley Technical College with a focus on musical theater. After two semesters focusing on general studies, his director approached him with information about an internship with Peninsula Players.

“I had no idea what I was doing,” Pingel said, but he was accepted nevertheless – and so began a relationship with the Players that lasts to this day. During his internship, he worked in a rotation, spending time stage managing, in the scene shop, in the box office – almost every backstage job you could conceive of – with the exception of costuming.

“[It] was hilarious, looking at my career now,” Pingel said.

During the next five years, he worked on stage and off and entered a four-year university. It became apparent that he was enjoying his time in technical theater more than his work onstage, and so Pingel shifted from pursuing a degree in performance to one in design and technology, focusing on costuming.

In 2013, the Costume Shop manager position opened up at Peninsula Players, and soon after, he found himself back in Door County.

For Pingel, the work begins with the script. An initial reading answers basic questions about the setting, time period, socioeconomic status of the characters and so on. He takes this understanding into the early production meetings, where he hears from the director and other designers about what their vision for the show is.

These meetings reveal the “design language” for the production: abstract versus realism, for instance. From there, Pingel reads the script a second time, this time thinking about color, themes and what type of people the characters are. Then he collects images, swatches and other visual material to create mood boards for each character and the show overall as he brainstorms the aesthetic of the production.

“For instance, I did a production of King Charles III,” Pingel said, “and the director gave us this idea that all of these people felt like they were in prison.” Pingel ran with it, and “everyone in the palace had some sort of stripes or plaid, like a prison uniform,” he said.

Costumes are a big part of the story, and often their greatest strength is their ability to tell the audience who characters are even before they say their first line.

The next step of the process is all about logistics. As Costume Shop manager, Pingel works with the costume designer to lay out every costume needed for the show. A man with average measurements might need a standard suit, so Pingel can pull the costume straight from the shop with only minor adjustments needed. A woman may need a dress from the ’30s, but none of the dresses in the shop fit her, so the dress will need to be created from scratch.

The cutter/draper then creates the pattern and cuts the fabric, which goes to the first hand for the initial stitching. The actor who will wear the costume does a fitting, and if the costume needs further alterations, the process repeats. When the fitting is a success, the costume goes to the finishing stitcher, who finalizes it.

Other considerations along the way may include dyeing the fabric, fitting shoes to the actor, crafting a hat or jewelry for the costume, and so on. In a smaller theater, Pingel may play any one of those roles, or many at a time.

Preproduction is the most critical phase of the process. Once every costume has been pulled, crafted and fitted, someone needs to manage all of these costumes for the run of the show and between runs as well. If a costume is damaged, it must be repaired quickly. If a character is bloodied on stage during each performance, that costume needs to be washed and restored to its original state every single night.

Pingel takes the other designers into consideration as well, asking questions such as, “How do I use the costume to hide the microphone?” or “Will this costume reflect the lighting in an unnatural way?” or “If this actor has to do any acrobatics with his or her choreography, how well does this costume move?” Collaboration is key.

Pingel loves designing because there’s no limit to what he can make. He relishes color, pattern and texture. Even in a simple design such as a man’s suit, he looks for opportunities to add grit.

“That’s why I enjoy abstract more,” he said, “because I can make something that’s never been created before.”

Pingel also designs wigs and makeup. They have their own inherent challenges, but in combination with the costuming, they offer an equally powerful opportunity to create a character.

It’s all about collaboration, and that’s perhaps what has drawn Pingel to his work in the theater. Everyone works together to create a singular piece of art, and if everyone does their part perfectly, you may never even notice.