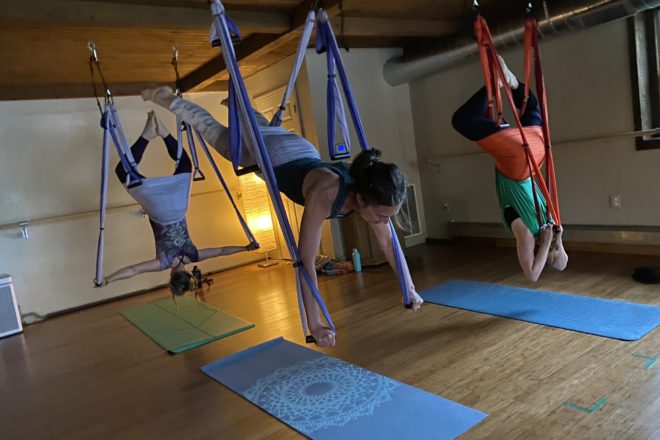 As I sat on the mat in the dimly lit studio, I tried to remember the last time I had practiced any form of yoga. After just a few poses, my sore muscles and rusty joints told me it had been awhile. And yet there I was – an out-of-practice, on-again/off-again yoga novice – attempting my first Yoga Trapeze class.

At first glance, the studio space looks like what you’d expect for any other yoga class. But one stark difference – a hammock-looking sling that hovered above my mat – immediately signaled that today’s practice would be unlike anything I’d previously experienced.

Gretchen Johnson, the instructor who teaches Yoga Trapeze at Ironwood Yoga, 10559 Country Walk Dr. in Sister Bay, took me through the parts of the device, referred to as a “rig.” This particular style of inverted sling, created specifically for yoga by YOGABODY founder Lucas Rockwood, features three sets of padded handles and is fully adjustable, allowing it to accommodate all body shapes safely and securely.

And although the exact origins of trapeze yoga is unclear – people have been finding ways to invert their bodies and creating inversion devices to help them do so for years – the purpose of it is not. Inversion poses such as those experienced during Yoga Trapeze are believed to release tension, improve circulation, strengthen muscles and restore energy levels.

For students in Johnson’s class, improving overall strength and alleviating back pain top the list of why they initially walk through the studio door.

“I’ve had students who felt back-pain relief from the inversions immediately,” Johnson said.

But most often, it’s the marked increase in their overall strength, both core and posterior, that keeps students returning to “hang out” some more.

“With a weekly practice, I’ve typically got students flying in superman/superwoman [pose] within four weeks,” she said.

But first, one must learn to fly.

“Everything we do in the beginning of the class builds to being up in the air,” Johnson said.

The class begins with the rig set to the right of the mat. (Part of the class involves knowing how to set up and take down your own rig.) After some opening breathwork, I clipped the rig into place – but no student gets into the rig without passing Johnson’s safety check.

We began in position one, or standing next to the rig, holding on to the high handles with arms parallel. Then we moved through a series of poses with the body suspended, but supported, by the rig.

The one thing I noticed immediately was how much deeper I felt each movement through my muscles, spine and joints, making the practice, in my opinion, a worthwhile addition to the more widely practiced vinyasa-based yoga. In fact, any form of aerial yoga offers a distinct set of benefits that one cannot attain through a mat-based practice alone.

“Mat-based yoga is extremely comprehensive and provides balance and improves overall health, including strength, mobility, cardiovascular health, respiratory health, circulation and general fitness,” Johnson said. “[But] Yoga Trapeze provides a few things you can’t get on the mat, and that includes functional pulling and grip strength.”

That’s not to slight mat-based practices such as vinyasa-style yoga, but for all its benefits, there is one thing missing from more traditional practices: the benefit of functional movement such as rowing, holding, pushing and pulling.

That’s because the rig supports the body, essentially making the postures non–weight-bearing. Many health experts believe that incorporating traction, flexion and passive mobility in these non–weight-bearing positions can greatly reduce lower-back pain and sciatica and can even add 1-2 millimeters of space between the L4 and L5, and L5 and S1 vertebrae.

“I swear my students are taller after class,” Johnson said.

But that’s not to say that everyone should race to sign up for an aerial yoga class. People with certain conditions – including pregnancy, herniated discs that are stage 2 or higher, cardiovascular disease, hypertension (unless it is controlled by medication), and glaucoma – should avoid aerial yoga.But for those who are ready to take flight, practicing one or two times a week, in addition to a regular yoga practice, is a good place to start.

“I love challenging and nonstandard workouts that are fun,” Johnson said. “Yoga Trapeze is all of that.”