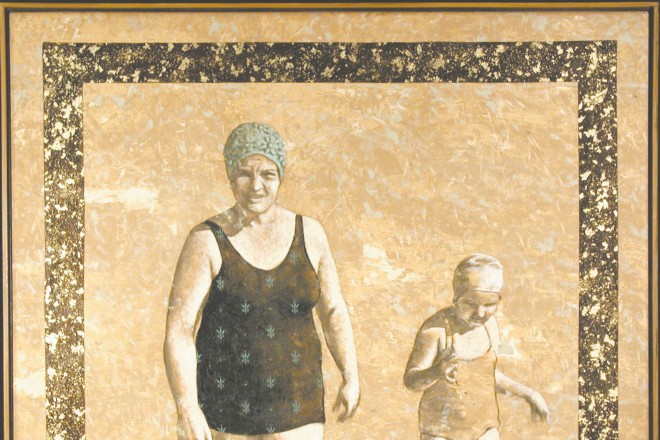 The pictorial effects and unanswered questions emanating from Pamela Murphy’s paintings suggest she should be in New York, Chicago or Los Angeles. Instead art collectors from these
cities purchase her work while visiting Door County, knowing they have discovered an artist
whose work extends past the county’s landscapes to suggest something more familiar.

It is a commonality that attaches us to Murphy’s paintings. To inspire her paintings, she collects
old photographs. Murphy believes photographs serve as mirrors ­ for our culture and ourselves ­
documenting our society. The artist isolates figures from the photos placing them on large
canvases with strong backgrounds. The figures are common images to us all: a child in a swing;
a woman holding apples in her apron near an orchard; two young girls in fancy, white dresses.
They represent people we connect with or recognize.

“My work is very intuitive,” says Murphy. “I react to the photographs. I prefer photographs from
the turn of the century to the 1950s. The photographs are records of the lives of strangers, yet
familiar images to all of us. The photographs remind us of ourselves, our families, and our
issues on both personal and cultural levels.”

Murphy’s work is not just about the figures, but also about her distressed backgrounds. The
figures are positioned on sometimes up to twenty layers of paint sanded and scraped to create
a sense of history on a rich and textured canvas.

“The many layers of paint reveal the history of the canvas and create a shallow space that
serves to isolate the modeled form of each figure,” says Murphy. “The elements of my paintings
are applied in layers, much like dressing the paper cutout dolls I used to play with. I often use a
decorative, repeated pattern, which serves to confuse or flatten an area, or to suggest a less
finite dimension. I have always found it interesting that parts of the painting can be treated flatly
while other parts are more realistically drawn.”

Using oils and frequent gold leaf, Murphy’s paintings mystically operate on several senses at
once: The figures reach out – isolated in a dimension all their own ­ they touch your longing for
an understanding of their predicament. You sense their history through a pattern that entwines
them to the canvas. They are simultaneously trapped and rescued.

Murphy attracts public attention. The Chicago Tribune says, “The clashes she intends – cultural,
iconographical, temporal and so on – are clearly visible and not just part of a conceptual
exercise.” The Nation summed it up well when it stated, “standing before a Murphy artwork you
unconsciously start moving into it.”

Murphy, 43, was born in California and moved to Appleton with her family during high school
when she became acquainted with the Door Peninsula. She received her BFA from the Rhode
Island School of Design in Providence and completed her masters at Visva­Bharati,
Santiniketan, India. While studying, she was influenced by India’s fine, intricate, miniature
paintings. The iconographic forms and patterned surfaces continue to appear in her work.

A few years later as the recipient of a Fulbright Grant, Murphy lectured and researched painting
techniques at the National College of Arts in Lahore, Pakistan. The artist continues her artistic
journey on a 10­acre property in rural Door County with her husband, Steve, where she has
converted a barn into her working studio. On any given day she is surrounded by the studio’s
white walls covered with unstretched canvases all in different stages – solid and patterned
backgrounds, figures sketched in charcoal and finished works.

Without a doubt, Murphy’s art goes beyond the painting. Her soft­spoken personality plays in
contrast to the messages resounding from her work. The contemporary artist does not let the
viewer walk away empty­headed. Through her work, she generates a psychological edge to ask
people to address issues ­ albeit sometimes uncomfortably.

In her bather series, which she considers some of her strongest work, Murphy addresses the
belief of an ideal body type. Her adult bathers are dressed in bathing caps and swimsuits from
the 50s. Murphy relates a story at an opening when a group of men asked her why she doesn’t
paint beautiful women? “I told them that these are beautiful women. They are very comfortable,
not self­conscious. They are so at ease with themselves.” The men went back to the paintings
and eventually agreed with her.

The children in her paintings suggest vulnerability either in the gesture or the dress. In a recent
series on exhibit in Chicago, she painted children in white ruffled dresses without heads
because she felt faces became distracting. “I find these images accessible to more people.
They are anyone. Without the face, the painting becomes about the gesture – the hands – and
how the children react to having their photograph taken. The gesture communicates.”

The hands communicate power, strength, comfort, formality, intrigue and playfulness. It is
communicated not typically through the children’s smile or eyes, but through the viewer’s own
personal experiences reacting to the gestures.

“I want there to be layers of understanding in my work. It’s always been OK that my work means
different things to different people. I want to keep pushing my work further,” says Murphy.
Murphy’s paintings record and symbolize, working to find common ground between distant and
present culture. By incorporating old photographs she resurrects memories and addresses
issues pushing us to find a little bit of ourselves in her work.