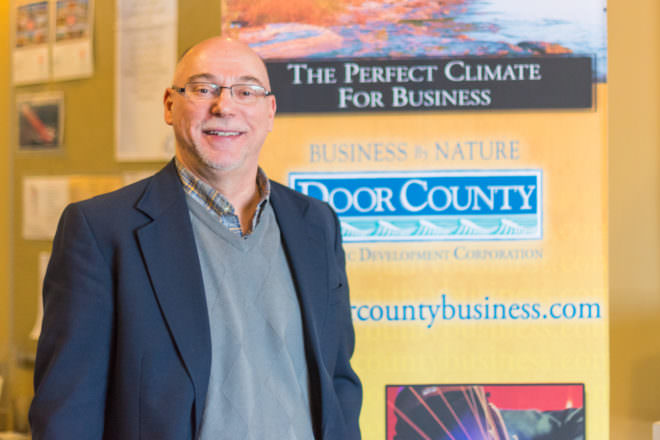 Twenty-eight years ago next month, a young man who had spent the past nine years in the Door County Planning Department became the first executive director of the newly created Door County Economic Development Corporation (DCEDC).

“It’s kind of an interesting story how we got this thing started,” said Bill Chaudoir, who stepped down from his post in December.

“What was going on then, Bay Ship was a mega-employer to the tune of almost 2,000 people during the ’70s and ’80s, so we didn’t need an economic development organization in the county then,” he said. “They were bringing in a lot of people into the community to take jobs there. But that came to a screeching halt in the late ’80s with a cutback in shipbuilding across the country.”

That was a major economic hit that the county decided to combat with the formation of an economic development task force to come up with a plan to deal with the county’s sudden 18 percent unemployment rate.

“We got a lot of attention in the state because of the serious loss of jobs. Bay Ship went down to a few hundred people in just a couple of months,” Chaudoir said. “Gov. Thompson came to town and brought his entire cabinet. I was working as a planner for the Door County Planning Dept. I partnered with Wally Blevins, executive director of the Door County Chamber of Commerce. We staffed the task force and met throughout 1988 and brought in a lot of guest speakers, studied what other organizations and communities were doing around the state to be more proactive in economic development.”

They decided it was time to have a full-fledged economic development organization that would include leadership from both the public and private sector.

“That was kind of a new model at the time, public and private leadership on the board of directors and funding from both sectors,” Chaudoir said. “There were only a few like us around the state, but that’s what the experts advised us to do. That was the new model for economic development. The community embraced that and it was written up in a proposed plan and both city and county governments adopted the plan and committed funding.”

A statewide search for an executive director of the new organization began in the fall of 1988.

“I was one of the local candidates that applied, and I was lucky enough to get the job,” Chaudoir said. “We started in February of ’89, just myself. The chamber of commerce donated an office in their building on the highway south of town and we got to work.”

The first thing Chaudoir and his board focused on was a new state program to create eight economic development zones that would provide income tax incentives to businesses that create jobs.

“The state legislature committed to eight zones around the state,” Chaudoir said. “It was based on how good a plan we put together, community support and economic distress. We were one of eight approved for that designation. That yielded us hundreds of thousands of dollars in state income tax incentives. Now that is very common in the state and all over the country, but at that time, that was a new concept of rewarding business through tax incentives. We had a lot of success with that program, and helped a lot of tourism and manufacturing businesses get some incentives to grow. That was one of our first big wins, and a nice kick-start to the organization.”

That first win by the DCEDC proved to Chaudoir what a special place Door County really is.

“We can pull stuff off that most communities our size wouldn’t even think of doing. With the volunteers and leadership we have here, we can pull off these things,” he said.

While still working as a planner, Chaudoir wrote some grants for the City of Sturgeon Bay to expand the industrial park.

“That kind of overlapped both jobs,” he said. “We got two grants totaling around three-quarters of a million dollars from the feds to expand the industrial park. It is a major success story and we’re fortunate to have some businesses there that have just quadrupled and quadrupled again in size, companies I’m thinking of like TTX and Hatco, Marine Travelift. Those were the stalwarts back then and continue to be.”

“His early challenge to me was to work hard to get a four-lane highway approved to Green Bay,” he said. “We were dealing with a two-way highway and there were a lot of accidents – manufacturing trucking competing with recreational vehicles.”

At the same time, Gov. Tommy Thompson had unveiled his 2020 transportation for the 21st century plan.

“It was Gov. Thompson’s effort to create a long-term strategy for the state,” Chaudoir said. “We lobbied to get in that plan, and we made it in, but we were a low priority. There were a lot of projects ahead of us. The prospects looked like we weren’t going to get that done until about now.”

But the county had a trump card in then-Sen. Alan Lasee.

“He had some influence. He was on the right committee, the Transportation Projects Commission, and they approved all those projects.”

Chaudoir and the DCEDC acted as community organizers for the highway project.

“Ever year the state would have a competition for what projects would be tackled. So we lobbied for that very hard,” Chaudoir said. “They had hearings and we had a strong contingent of public-private sector business people to these meetings and talked about the serious need we had and the challenges. The unfortunate part of the whole thing, accidents and deaths and injuries are heavily weighted in the decision on what projects are funded. Unfortunately, we did have a fair number of accidents and a few deaths that actually scored points when it came down to competing for the projects. It took a while. The project was done in three phases, the last part in the late 1990s. We finally got it done and it was a proud moment, not that we did it alone, but we helped orchestrate the process for Door County. I felt very proud of our role in making that happen. Without transportation, it’s tough to do business and accommodate visitors.”

Chaudoir pointed to a few other achievements he was proud to be involved in during his term.

“The Door County Business Development Center, a 32,000-square foot business incubator. We got a million dollar federal grant to open that,” he said. “We opened that in 1997 with no debt. We had a lot of local private and public support to fund that as well. That helped launch 20 or so businesses in our community. That’s been a tremendous boon for the financial wherewithal of the organization from renting out space. We have a great asset there.”

In 2005 the DCEDC hired a consultant to help come up with a plan to help the two shipbuilding companies – Bay Ship and Palmer Johnson.

“We prepared a plan, met with the governor and asked for his support. He provided a $6 million grant to Bay Ship for a new floating dry dock and he provided $2 million to PJs for equipment upgrades to help grow the business. So that was a huge incentive and catalyst for both those companies to grow in a big way. We really helped those companies. PJs of course went away, but Bay Ship has absorbed those buildings and equipment that were funded with those grants, keeping those assets working.”

He is also proud of Legislative Days, which started in 2003 with the help of then Rep. Dave Hutchinson.

“We’ve been doing that since 2003, every other year,” Chaudoir said. “The goal is to take 100 people from Door and Kewaunee counties to Madison to put our hand out to see how they can help us grow our community. That also has paid a lot of dividends.”

“This is a very comprehensive workforce development initiative,” Chaudoir said. “Many places are hurting for employees. We have more jobs than people to fill them. We put our heads together, both staff-wise and our board of directors. We strategized about this and we came up with this new initiative. It attacks the problem on a three-front basis. First of all, trying to find people, so we’re aggressively monitoring where there are plant layoffs and closings in other communities and informing our businesses about those. We have a committee called the workforce task force to pursue those initiatives.

“If you can attract somebody, they need housing. We have a housing shortage here, particularly in apartments. So we have a workforce housing initiative. They are continually working with agencies and developers to create new housing.

“The third leg of that stool of the initiative is trying to retain our young people in the county after school. Or if they leave for college, that they know there are opportunities here when they graduate. The biggest fear I have for our community is losing businesses because they can’t find workers. That would be a sad state of affairs. At least now we have a tool in place to help inform our kids about opportunities they have right here in their hometown.”

Chaudoir left the organization knowing the good work for the community would continue in his absence.

“They did a multi-state search. I’m pleased that they landed Caleb [Frostman, the new executive director]. He’s got a lot to offer and the right temperament. We have a phenomenal staff, starting with Sam Perlman, who has been on the forefront of all of these initiatives. He’s going to be a great asset with Caleb to keep all these balls in the air.

“I guess the bottom line, I would say, we’re so fortunate with the strong public and private support of the organization that we’ve been able to accomplish a lot of things. For a rural community of 30,000 people, I would put our economic development corporation against any other community in the country for having the size organization we have as far as employees, the variety of programs and initiatives we’re actively engaged and promoting every day. I’d put us up against anybody. It’s been pretty rewarding.”

Chaudoir said he and his wife, Cheryl, plan to spend a good deal of time traveling to see family and friends in warmer climates, as well as exploring their Belgian (Bill) and Dutch (Cheryl) heritage.

“Obviously, Door County will always be home for us. But at least for the next couple of years, I see a lot of travel,” he said. “But as my board chair said at my retirement party, I bleed Door County. I look forward to being a part of the continuing improvement of Door County, wherever that takes me. You never know.”