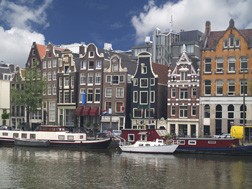 On Sept. 20 the Kiwanis & Rotary Clubs of Northern Door will present the first travel film of their new season. Presented live and in person by Sandy Mortimer, a well-known travel film producer and journalist, the season commences with a visit to the Netherlands.

Mortimer’s film, Discovering the Dutch, goes beyond the clichés and gabled houses and into the stories of history already made – as well as today’s life and history in the making.

Stops along the way include: Amsterdam with its historic churches, Royal Palace, Anne Frank house, and canal tours; the cheese market and windmills in Edam and Volendam; the Alsmeer flower auction; Schiedam, a city known for its gin production and the tallest, old windmill; Rotterdam – the largest port in Europe (until 2004); and Oudewater to explore the 16th century witches weigh house where thousands of suspected witches were brought to be tested.

Born and raised in Michigan, Mortimer was a flight attendant for American Airlines. During the late ‘70s, she became a news reporter and on-air personality for a CBS affiliate television station, developing and sharpening her skills in film and video journalism.

Other travel destinations on this season’s itinerary include journeys to Southern Europe, Taiwan, Alaska and Bhutan. The screening is set for 7:30 pm at First Baptist Church in Sister Bay. Tickets are $7 or $36 for a season pass (for all six shows in the travel film series); children 18 years old and younger are free. For more information, contact Gary, 920.854.4825, or Larry, 920.839.9419.