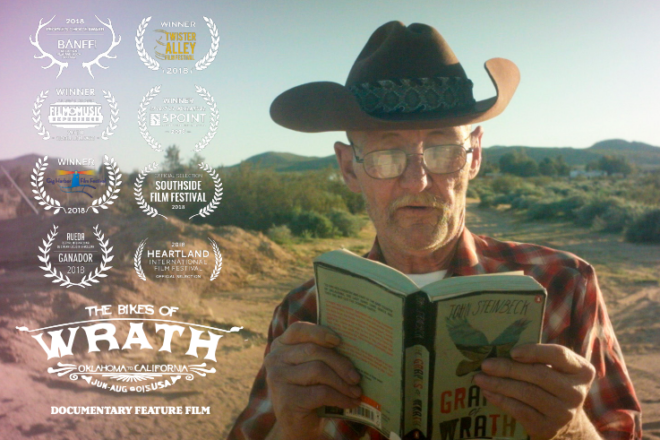 “You’re bound to get idears if you go thinkin’ about stuff.”
John Steinbeck, The Grapes of Wrath

April 14 marks the 80th anniversary of the publication of John Steinbeck’s Dust Bowl epic The Grapes of Wrath.

Contemporary reviews of the book, which went on to earn a Pulitzer Prize, showed a great partisan divide. Those on the left hailed it as the great American proletarian novel while it also ran up against widespread bans by libraries and school boards.

Oklahoma Congressman Lyle Borden called the novel “a black, infernal creation of a twisted, distorted mind. … Some have said this book exposes a condition and a character of people … but the truth is this book exposes nothing but the total depravity, vulgarity and degraded mentality of the author.”

The novel’s depiction of California labor camps prompted the Senate Committee on Education and Labor, chaired by Wisconsin’s Robert La Follette, to investigate tactics used by Associated Farmers, an organization of California’s corporate farmers founded in 1934 to oppose labor strikes and the organization efforts of farm laborers. The committee found “the most flagrant and violent infringement of civil liberties” being used by the Associated Farmers against farm laborers.

In direct response to the bans against Steinbeck’s novel, the American Library Association created the Library Bill of Rights, issuing it on June 19, 1939. Its stated purpose was to “answer practical questions that confront librarians in applying the principles of intellectual freedom to library service.”

The kerfuffle about the novel eventually died down, but five Australian friends wondered whether America had really changed during the intervening years. Two years ago, they decided to cycle from Oklahoma to California in honor of the mighty westward migration undertaken by The Grapes of Wrath’s Joad family, filming a documentary of their experiences along the way. It’s called The Bikes of Wrath.

Seeking to gain a greater understanding of the Dust Bowl, explore the central themes of the novel and discuss their relevance in today’s America, they set off on their 30-day cycling adventure with no support vehicle, no training and, as one member puts it best, “no real idea.”

Loaded with trailers, musical instruments and camera equipment, the group set itself the additional challenge of surviving on $420 (the modern-day equivalent of the Joads’ $18 in the 1930s) and whatever funds their musical performances could garner.

Through chance encounters with everyday Americans, the cyclists expand on the novel’s core: migration, inequality and the perceived land of opportunity. The group explores whether America has progressed since the book was written, discussing the wealth gap, immigration and the American Dream.

Letting the cycling group into their homes and lives — and demonstrating the startling parallels of The Grapes of Wrath eight decades after its publication — some vastly different characters quickly become a central focus of the documentary and are integral to the success of the cyclists’ journey.

The resulting documentary uncovers deep insights into the human spirit and shines a positive light on America at a time when the world needs it most — all rolled into a unique, funny and life-affirming observational documentary filled with adventure, literature, music and human connection.