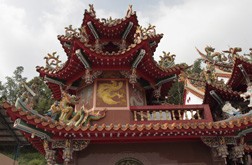 After a holiday season hiatus, the Kiwanis & Rotary Clubs of Northern Door resume their 2013-2014 Travelogue film series on Feb. 14, with an adventure to the island of Taiwan. Presenting the film live will be one of the leading travel film producers in the industry, Buddy Hatton, whose work has been featured on The Travel and Discovery Channels and PBS.

Destination Taiwan is Hatton’s newest film and is in keeping with his travel film signature of showcasing exotic destinations on the Asia continent.