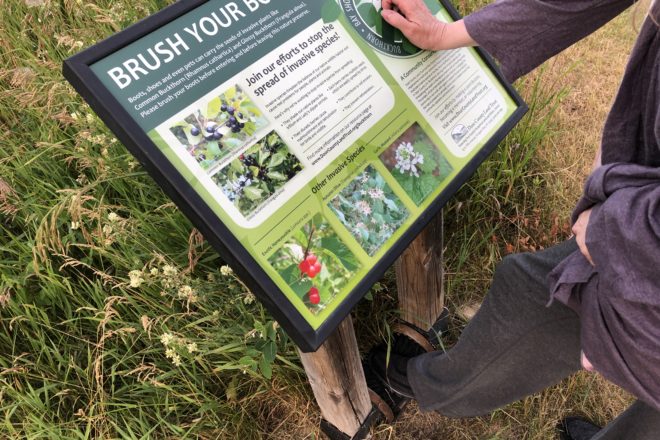 Signs at a Door County Land Trust trailhead advise hikers about rules ranging from keeping dogs on a leash at all times to packing out anything they pack in. Also, to prevent people from tracking the seeds of invasive plant seeds onto the property, the Land Trust asks hikers to wipe their shoes and boots on boot brushes, such as this one at Bay Shore Blufflands. Photo by Craig Sterret.

Hikers have no problem finding a trail on the peninsula or nearby islands, thanks to its five developed state parks, 19 county parks and the pristine lands managed by nonprofit organizations such as The Ridges Sanctuary, Door County Land Trust and The Nature Conservancy.

Now, if folks could just stop straying off those trails.

Local park and nature-preserve leaders have slightly different rules at various properties, but all of them share concerns that more users can cause more damage.

And those rules pertain to both people and pets.

Burke Pinney, Door County parks director, said the county still welcomes pet owners to take Fido along with them, but during the past few months, “with the large influx of new park patrons, we did see an increase of dogs off leash.”

Dogs must be leashed at all times in the county parks.

“This is not only for the safety of the dogs, but also the ecological health of the parks,” Pinney said. “Some parks such as Door Bluff Headlands, Ellison Bluff and Meridian County Park are ecologically sensitive, so it is very important that dogs and humans remain on the defined trails.”

Protecting land, wildlife, plants and the environment rank at the top of the Door County Land Trust’s (DCLT) goals, so visitors need to remain conscious of that mission when they use a property.

“We always need to share the message about responsible hiking,” said Cinnamon Rossman, DCLT’s director of charitable giving. “There’s more people out there than ever before. People are looking for places to go outside, and they know the state parks are overrun, and they’re looking for something a little different and quiet.”

During the spring especially, DCLT has concerns that dogs can disturb birds that nest on the ground, such as the locally rare piping plover, which needs undisturbed, sandy shoreline habitat.

“We ask that dogs remain on leash at all times. That’s true of all of our nature preserves,” Rossman said.

Dogs – and humans – can also spread seeds from invasive plants, so DCLT and some other locations provide boot brushes at trail access points. Nature-preserve and park managers ask hikers to use them before entering a trail because seeds or rhizomes of invasive plants can hitch a ride on shoes.

Newport Wilderness Society President Gene Kenny said that he and fellow friends of Newport State Park have talked about installing boot brushes at trailheads, in addition to the existing one at the nature center. The park has many more access points than some nonprofit organizations’ preserves, however.

“Unfortunately, we would probably need about 50 at various places,” Kenny said.

He said outdoors-savvy Newport visitors tend to tread more lightly than those who make only a couple of visits per year to busy parks.

Newport State Park naturalist Beth Bartoli says most people who have a desire to take nature hikes in the wilderness park tend to follow rules, but many pet owners fail to pick up after their dogs. Some even leave bagged waste along the trail or near parking lots.

The Ridges Sanctuary does not allow dogs at all because the pets could affect the flora and fauna at the preserve. The nonprofit organization also takes a strict stance about requiring people to stay on the trails and boardwalks, said Andrew Gill, who’s finishing his first spring as its executive director.

“I think the pandemic shifted people’s focus to getting back outside, so our trails are as busy as they’ve ever been. That extra pressure has had an impact on the landscape out there,” Gill said. “At The Ridges, we have a no-dog policy, and that relates to [protecting] our orchid population and the other vulnerable species.”

The Ridges is home to 27 of the 49 orchid species in Wisconsin, and helping those populations to survive and thrive are top priorities.

“Here at The Ridges, we see a lot of people leaving the trails to go photograph various plant species, particularly our orchid population. That is a major problem,” Gill said. “Folks want to find a blooming orchid, but to get to some of those, they’re trampling over other orchids that are not in bloom yet. They have great intentions, but unless you can accurately identify plants very, very well, it’s tricky to avoid damaging plants in pursuit of another.”

Gill said most sanctuary users respect rules, and he has also noticed visitors acting as “trail stewards” by saying something to people who are not following a rule or who did not recognize that something they were doing can hurt plants, animals or features at the preserve.

“We have similar rules to other places,” Gill said. “You have to stay on the trail; you’re not foraging or taking things from the land; whatever you pack in, you’re packing out.”