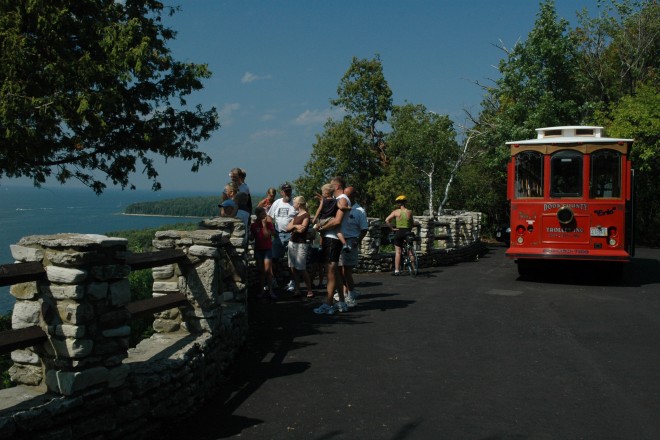 Tourists flock to the peninsula to soak in the natural beauty of the county.Photo by Dan Eggert.

It’s a dilemma every tourism destination must confront at some point and one Door County is grappling with now.

You need to attract visitors to drive your economy, to provide the economic lifeblood that allows you to live in a place you love. But those visitors and the growth that accompanies them are eroding much of what you loved about this place to begin with. And if you don’t do something to curb the erosion, you’ll soon find yourself without the visitors and without a living in the place you love.

The solution to the problem is to become sustainable, but getting there takes more than identification, more than public policy, more than vague ideas. In the words of Ed McMahon, Senior Resident Fellow with the Urban Land Institute in Washington D.C., “The most important thing you need to become a sustainable tourism destination is a vision.”

Back to “the vision thing.”

“To get there you need to do an inventory of your assets – the cultural, natural, and human assets that set you apart,” McMahon says. “Successful tourism plans grow out of that inventory.”

Then, he says, you have to protect those assets and guard against becoming a destination that looks like Anyplace, USA. “The more your destination looks like every place else, the less people will want to visit,” McMahon explains. “If all places looked alike, after all, there would be no reason to travel at all.”

Not so long ago, conventional wisdom said capitalism and sustainability were at odds. Efforts at sustainability would slow growth and the economy, a notion that left many potential stewards feeling fated to a future where the environment would be lost.

But then a funny thing happened on the road to a sustainable future. The words once discarded as the nonsense of tree-huggers and incense-burners entered the vernacular of the capitalists. The ideas of environmentalism, greening, and responsibility were grudgingly embraced by, of all people, marketers. In fact, the inventory McMahon suggested was taken last summer on the peninsula, but it wasn’t government or land trusts that organized the effort. Rather, it was Destination Marketing Expert Marshall Murdaugh, brought to the county by the Door County Peninsula Strategic Marketing Coalition.

Hundreds of business owners, residents, planners, and government officials turned out from around the county for Murdaugh’s brainstorming sessions last summer to contribute their thoughts on what and who Door County is and ought to be. Not surprisingly, a strong consensus emerged identifying the natural environment as the county’s greatest asset.

As leader of the organization with the most pressure to bring more visitors and their dollars to the county, Door County Visitor Bureau Executive Director Karen Raymore is in a difficult position. She recognizes the importance of the environment not only to the people who live here, but also its role in attracting visitors, and says sustainability is a pillar of the bureau’s marketing plan. “The natural environment is what’s drawing our business,” she says. “We help preserve that through niche marketing, identifying those who visit and will appreciate the experiences you offer.”

Door County shouldn’t go after visitors who are looking for a Las Vegas or theme park-styled vacation, she says. They are less likely to respect the destination, and more important from a marketing standpoint, they won’t leave satisfied.

“We have to be honest about who we are,” she says.

As the reality of global warming has settled in, the business community has adapted and the tourism industry is no different. Wisconsin is at the lead of the new green tourism segment, having initiated the Travel Green Wisconsin program last year.

The program is voluntary and reviews, certifies and recognizes tourism businesses that make a commitment to continuously improve their operations in order to reduce their environmental and social impact. Door County was one of the program’s four pilot regions when launched in 2006, as was Bayfield on Lake Superior.

A grassroots effort based on a model called Sustainable Sweden grew in the Bayfield area in the last decade. The Sustainable Chequamegon Initiative focused on four principles:  reducing the use of fossil fuels, stopping production and release of harmful chemicals, stopping the degradation of the physical environment, and taking into account the needs of all people in all decisions.

The initiative brought community buy-in to the idea of sustainable business, and in 2005 the city of Washburn became the first eco-municipality in the United States. The region is now positioned as the state leader in green travel efforts.

Mary Motiff is the Marketing Manager for the Bayfield Chamber of Commerce. She says the business community has no choice but to act as good stewards. “Our environment allows us to have a vibrant tourism economy,” she says.

Bayfield Mayor Larry MacDonald said participation in the initiative has been better than expected. “The process has been driven from the ground up,” he says. “People demanded the government get involved and the government is accepting it. In the end, it’s pretty hard to argue against clean air and clean water.”

They’ve discovered that the effort to conserve is not a burden on the region’s promotional efforts but a boon. The Chequamegon Bay has hitched their marketing efforts to the sustainable idea. “We’ve received a lot of media attention based on our Travel Green efforts,” Motiff says, including an eight-page spread in the February issue of Wisconsin Trails magazine. “Now we’re looking to host a Travel Green Wisconsin conference next year to teach people about the program. It all just goes hand in hand with the things we hold dear.” 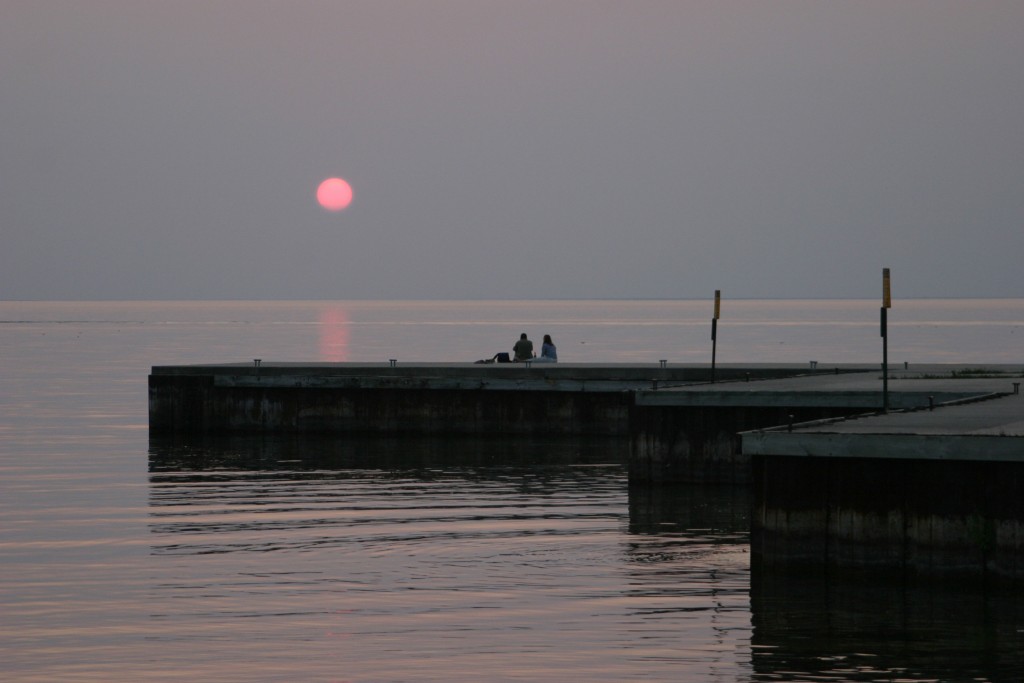 The Sustainable Sweden idea has spread to Door County, where the Natural Step study circles have educated dozens of people on the principles of doing business and living life in a sustainable manner. Last November, two Bayfield leaders in the movement gave a presentation in Sturgeon Bay detailing the effort’s evolution.

Steve and Nancy Sandstrom, owners of Bayfield’s Pinehurst Inn, have amassed more points than any other Travel Green-certified business. They said a Door County effort faces higher hurdles due to its accelerated growth.

“We’re about 15-20 years behind Door County in terms of development,” Steve estimates. “We have the luxury of not having to deal with the mistakes of the past. We have it easier than you.”

Fortunately, travelers’ sensibilities have shifted in a direction that parallels the sustainable tourism movement as well, McMahon explains. “Heritage tourism is the fastest growing segment of the tourism industry,” he says.

According to McMahon, people are drawn to historic downtowns, unique experiences, and local culture. What is the sense in traveling hundreds or thousands of miles to eat at McDonalds, shop at a Wal-Mart, and get coffee at Starbucks? McMahon says it is the absence of much of what makes destinations interchangeable that leaves Door County uniquely positioned to take advantage of the trend toward environmentally and culturally responsible travel.

“To a certain degree in Door County, we’re known for what we don’t have as much as what we do,” Raymore says, referring to the absence of chain stores and restaurants throughout much of the peninsula.

“It’s the historic architecture in the small towns, the water, the lighthouses,” says McMahon, who visited the county last June to give two presentations. “You have to make sure you hold on to that, rather than trying to be something you’re not.”

Downtown Fish Creek is one of the peninsula’s most popular shopping destinations. Photo by Dan Eggert.

It’s easy to come up with destinations that have not grown in a sustainable fashion, towns and cities that have lost their character and are no longer what and who they once were. McMahon points to Lancaster, Pennsylvania, a destination that sells itself as a “rustic, Amish destination. But if you go there it basically looks like a suburb of Philadelphia. They market themselves as something they’re not and the result is visitors feel cheated and they go once and never come back.”

“The best marketing is word of mouth,” McMahon says, “and you get that when you exceed expectations.” He says Florida’s Sanibel Island is a destination that does this through progressive planning. “It’s very different from most of coastal Florida,” he explains. “There are no high rises along the coast like you see everywhere else in Florida. They’ve protected all of their native vegetation. They’ve banned billboards and traffic is not the problem it is elsewhere because they have one of the most comprehensive bike trails anywhere.”

Residents of an evolving community like Door County sometimes see the changes around them and feel hopeless, like their home is spiraling out of control and there is no way to stop the barrage of poorly planned development and growth. But the message coming from planning experts and marketers on how to get it under control is actually quite simple.

Decide what you want to be and stick to your guns.

Debbie Geiger, owner of Geiger and Associates, was recently hired to handle public relations for the Door County Visitor Bureau. She was asked how a destination contains growth and change while actively pursuing more visitors. She urges communities to get serious and have the endpoint in mind at the beginning, to decide where you want to be. “If you don’t make the decision,” she warns, “it will be made for you.”

The beach at Sister Bay. Photo by Dan Eggert.

“The key is working together amongst  the various constituencies [government, business, and citizens] to find common values,” he says. “You do that first and you’ll find it’s easier to find common ground. You need a forum for dialogue among the groups.”