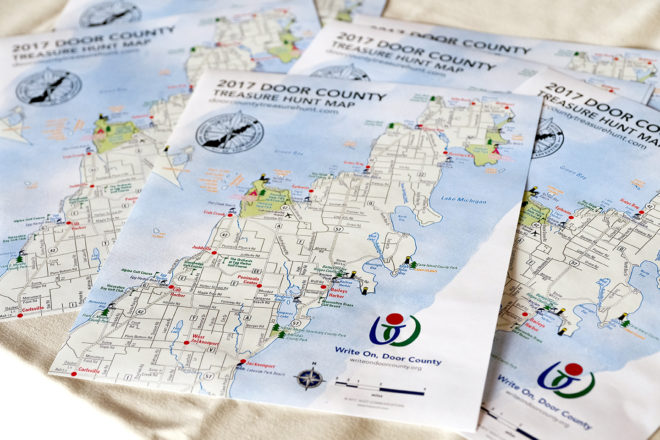 Last year, at the inaugural Write On, Door County Treasure Hunt, Ellison Bay children’s book author Jill Harding, her sister Jane and three friends, found themselves running the bases of a local baseball diamond as part of fulfilling a clue in the Treasure Hunt. “That was a pretty funny thing,” said Harding, who was a member of a team called the Ellison Babes. “It was a load of fun, and to support a really wonderful organization like Write On was a lovely thing.”

This year’s Treasure Hunt is scheduled for September 29. The family-friendly fundraiser, sponsored and put on by members of Write On, which promotes writing and reading and brings in programs and speakers to Door County throughout the year, is open to all ages. All that is needed is a group of up to five friends, relatives or acquaintances, armed with at least one smartphone, a car and an adventuresome spirit to hunt for the Door County-related treasures as described in an official clue booklet. 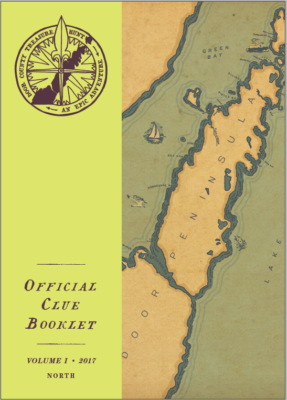 The 2017 clue booklet designed by Ryan Miller of the Peninsula Pulse.

Approximately 26 clues are available and points are awarded for “finds.” In some cases participants are asked to take photos or videos of their adventures, and there is a special app which allows participants to detail their discoveries. Contestants are also allowed to Google search their answers.

Last year’s event attracted more than 200 people on 44 teams and centered on the natural, cultural and historical treasures at the northern end of Door County. This year’s hunt will have participants scouring the area from Carlsville and Jacksonport south to the shipping canals in Sturgeon Bay.

The location should not only be a challenge for the hunters, it also proved to be a test for the Treasure Hunt founders, organizers and clue book writers Anne Emerson and Vinni Chomeau. While last year’s hunt took place basically in the women’s backyard, this year the women were scouring the countryside of Door County that they were less familiar with.

“I learned a lot through doing this,” Chomeau said. “I definitely found some new places. When we are writing the clues we try to think of places people would enjoy going to in fun and creative ways.” Write On board member Ann Heyse also helped with writing the clue book.

Chomeau said that during the course of about six months the three women would meet periodically and brainstorm clues and destinations for the Treasure Hunt. Emerson added, “We really wanted to make a Treasure Hunt that involved people in what we feel are the real treasures of Door County…the cultural elements in a broad sense…not commercial,” she said.

Chomeau and Emerson said that people can make this as competitive as they like, or just use it as a fun day in which to explore the county and do something together with their team. “You might want to just meander and have fun,” Emerson said.

However, should the teams choose to do the Treasure Hunt competitively, there are some sizeable prizes available:  $1,000 for first place, $500 for second place and $250 for third place. Cost for participating in the treasure hunt is $250 per team prior to the event, and $275 per team on the day of the event. All proceeds from the Treasure Hunt go to support Write On, Door County programs throughout the year. 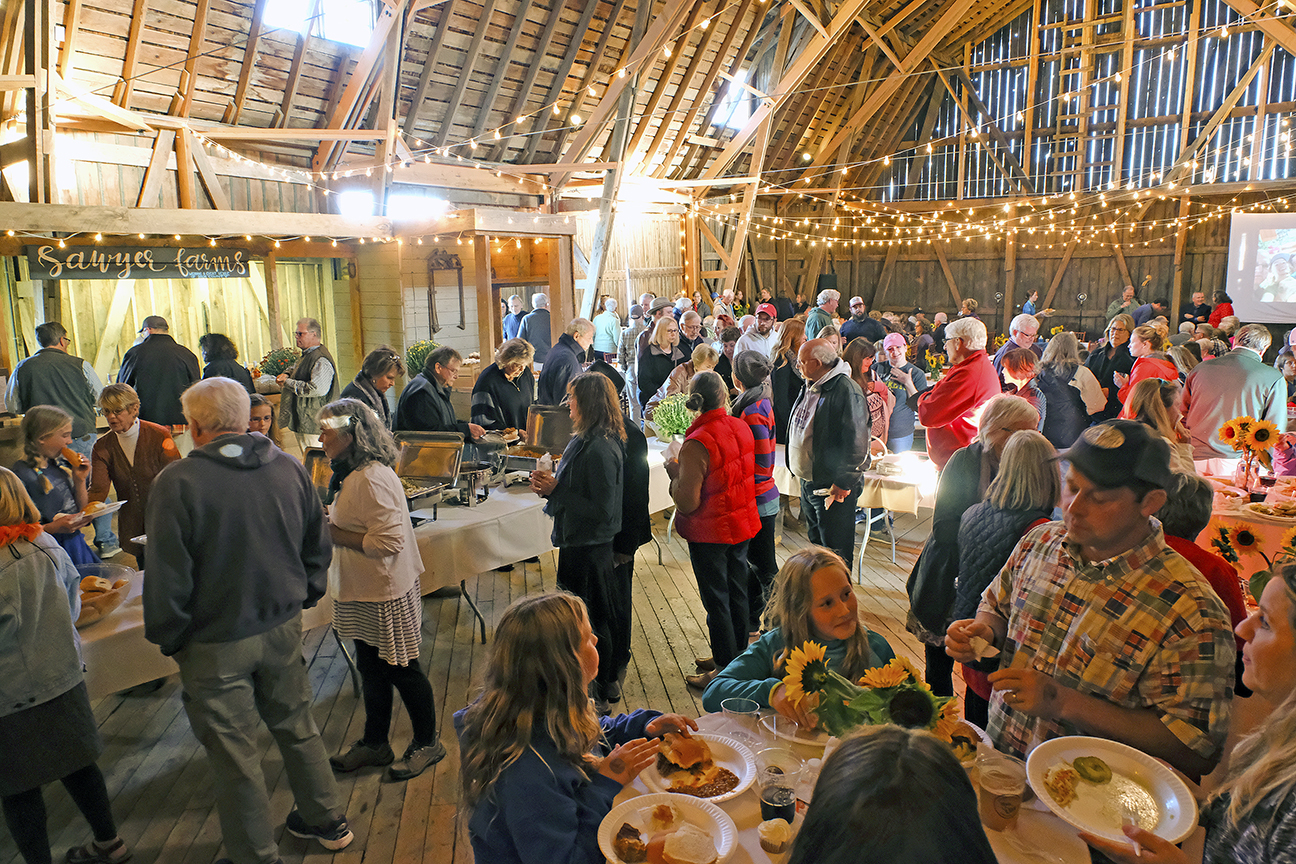 Chomeau said that last year, while some teams came close to completing the entire hunt, nobody completed all the clues. But she said the clue booklets, which will be available after the Hunt through the Peninsula Pulse and Write On for $10, provides a nice fun activity for people to use to explore and learn about Door County. “You can do this activity any day of the year,” Emerson added.

This year, registration for the event begins at 9 am at the Junior Fairground Building, 812 N. 14th Avenue in Sturgeon Bay. Coffee and doughnuts will be available and the clue booklets will be passed out. “Read through all the clues and plan the best route using the map provided in your Treasure Hunt packet,” Emerson suggested. The actual Hunt begins at 10 am and ends at 3 pm at which time the answers must be turned in via the app.

From 4 to 7 pm there will be a picnic party at the Fairgrounds with food and drink provided. Prizes will be presented at 6 pm and you must be present to win. In case of a tie for the first three places, a short trivia contest will be held to determine the winners.

Last year, Harding’s team won second prize – and more. “We had a lot of fun. We certainly just enjoyed being together that day,” she said. “And winning was nice!”

The Treasure Hunt also held some surprises for Harding’s team. “I thought it would be a leisurely day…it didn’t work out that way. There were a lot of things we had to figure out how to do,” she said.

She also had some advice for future participants. “Be prepared to spend the entire day. Have one person take care of the app and delegate responsibilities.”

For more information on the Treasure Hunt and to register go to doorcountytreasurehunt.com.

Door County Treasure Hunt
When: Saturday, Sept. 29, 10 am
Where: Door County Fairgrounds, Sturgeon Bay
Fees: $250 per team of 5
Description: A day of exploration, fun with friends and family, and discovering new things about Door County. There are $1,000, $500, and $250 prizes for the highest scorers. Compete to win or take your time traveling and exploring the beauty of Door County.  We’ll gather in late afternoon at the Door County Fairgrounds to share food, drink, prizes, and stories and photos of the day.