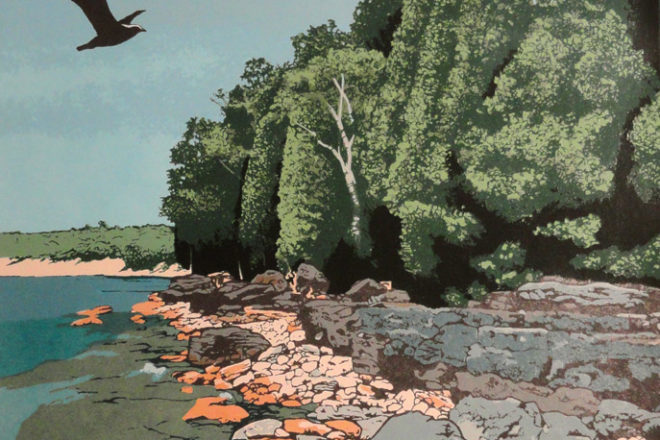 Shoreline” by Joseph Cook. Cook is one of the artists from Jacksonport’s past being celebrated by the program.

Door County’s communities have long been havens for artists, and on Wednesday, Sept. 21, 7 pm, the Jacksonport Historical Society’s program “Treasures from Jacksonport Artists, Past and Present” will put that town’s creatives in the spotlight.
The program will discuss art forms including photography, painting, repoussé silver jewelry, wood carving and weaving, but because of the volume of art produced in Jacksonport, the program’s organizers say this first presentation on art cannot highlight them all.

“Treasures from Jacksonport Artists, Past and Present” will begin with the artists of the past, presented in chronological order by their birth years, so the first will be Fred Erskine, an acclaimed, self-taught photographer who bought his first camera in 1910.

Erskine’s works reveal changes in Door County life over 60 years, as well as a pictorial history of WWI from the front. His granddaughter, photographer Marilyn Hein, will moderate this panel and will be among several family members of past artists who will be at the program.

Other featured past artists include Aline Zibell Schutt, who crafted silver jewelry that she sold from her Jacksonport studio; Norine Calkins Golden, whose many beautiful paintings hang in daughter Maureen Howell’s home on Lakeshore Road; and Joseph Cook, who based beautiful serigraphs on Erskine’s photos. The Erskine/Cook prints will be on display and for sale at the program.

Also included from the past are Jo Ann Scory Meunier, whose paintings adorn her son’s music studio in the red-brick Jacksonport one-room schoolhouse; Patricia Ann Rosier Rondeau, another longtime resident who had a lifelong passion for art and theater; and Jeanne Doern Whilden, whose wood carvings were displayed in her home on Lakeshore Road, along with works by other Door County artists.

Featured present-day artists include plein air painter Lauretta Thomas Kelley, who has owned a home on Lakeshore Road since 1994, and acclaimed weaver Wence Martinez, whose studio – with his works and those of his wife, Sandra – is at 5877 Hwy 57, south of Jacksonport.

Photographers Virginia Jones Maher, an art historian whose latest work features a Jacksonport forest; and Marilyn Hein, who created a book of Erskine’s WWI photos and has now released a photo book on Heins Creek, will be at the program with books available for purchase. Additionally, this Jacksonport Historical Society meeting will launch an anthology of short plays that feature artworks from the town.

This program is open to the public at the Jacksonport Town Hall, 3365 Cty V.