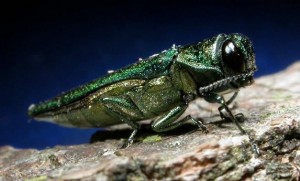 Todd Burke, owner of Dave’s Tree Service in Egg Harbor, said the office phone has been ringing constantly since the June 10 discovery of Emerald Ash Borer in Door County.

Although the tiny Ash-killing bug has only officially been discovered in Cottage Row in Fish Creek and in Sturgeon Bay, Burke believes it’s far more widespread.

“I’ve been noticing trees all over that just look terrible,” he said. “There’s no question about it. It’s probably in every nook and cranny of this county.”

Burke, a certified arborist, said he has been doing preventive chemical treatments on Ash trees in Door County since the insect was discovered in Brown County in 2009.

“But now that it is known here for sure, we’re getting calls every day,” said Burke. “We’ve been using Imidacloprid, a ground treatment that helps for other issues that Ash and Birch trees have, other bugs.”

Imidacloprid is a nicotine-derived insecticide that does not require a license to apply it. Now that the Ash-killing insect has been confirmed in Fish Creek and Sturgeon Bay, Burke said he has invested in equipment to inject EAB-killing insecticides directly into the tree.

However, Burke points out, “Tree treatments aren’t cheap. I looked at a job in Ellison Bay. He was all gung ho about saving 15 trees. After I told him what the tree injections are going to cost, he doesn’t want to do any of it.

“There will be a certain amount of people who choose to do nothing at all, whether they just don’t care or they can’t afford it,” Burke continued. “There will be some who want every Ash tree on their property treated, and there will be some who just want some ash trees treated. A good majority of the people that are going to be putting money into treating these trees, they’re probably retirement age already, and they’ll admit it, they’re not going to be around to see the tree grow to how they want it, so they’re going to spend the money to keep those couple real nice ones in the yard.”

Ultimately, Burke said, “It’s just going to be devastating. Eleven percent of Door County’s trees are ash. In the next 15 years or so it’s going to be huge. There will be so many trees that are going to be gone. It’s pretty sad.”

Andrew Hartman, owner of Acorn Tree Service in Sturgeon Bay, said his phone has been ringing off the hook with calls from homeowners wanting more information on what to do about their Ash trees.

“They want to know if it will help to prune their trees,” Hartman said. “It’s like the DNR said (at a June 24 informational meeting), the Emerald Ash Borer is completely effective at killing Ash trees.”

Hartman is in the process of obtaining his applicator’s license so he can start treating high value Ash trees.

But he has already done the math and figures by the end of the infestation, 1.5 million Ash trees will have died in Door County.