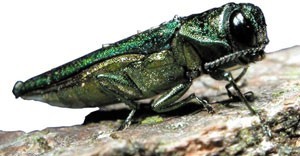 As of 2013 – only five years after the invasive Emerald Ash Borer (EAB) was first discovered in Wisconsin – 18 percent of Wisconsin is within 15 miles of a known EAB infestation.

Brown, Crawford, Dane, Dodge, Douglas, Fond du Lac, Kenosha, La Crosse, Milwaukee, Ozaukee, Racine, Rock, Sauk, Trempealeau, Vernon, Walworth, Washington, Waukesha and Winnebago counties have known infestations and are under quarantine. While the insects have not been found in Jefferson and Sheboygan counties, they are under quarantine because of infestations in neighboring counties.

While the tiny green pest has not yet been found in Door County, according to Door County Forester Chris Plzak, “We’re ripe for an infestation.” In fact, he said, it could already have been introduced but has not yet made its presence known.

“We don’t have a good way to predict where one will pop up,” said Linda Williams, a Green Bay-based forest health specialist with the Wisconsin Department of Natural Resources.

Williams and Plzak gave a presentation on the EAB as part of a special meeting of the Door County Airport & Parks Committee at the Liberty Grove Town Hall the evening of March 17. The meeting was held in Liberty Grove because that is the location of the largest Ash stand in the county, at Door Bluff Headlands County Park.

The Park committee wanted to educate itself and area residents on the advance of the EAB and the threat posed to the Ash trees in what Plzak described as “the crown jewel of the Door County park system.” He said 28 percent of the trees in the park are Ash.

Williams took the lead in talking about the EAB infestation in Wisconsin, complete with photos of Ash groves that have been devastated by the insects. She also dashed the hopes of those who believed the widely reported but wrong information that the severe winter may have killed off the pest. There will be some mortality, she said, but there are several factors working in the bug’s favor, not the least of which is that it is also cold in its native northeastern Asia. And the insects burrow under the Ash bark, so “wind chill means nothing to them,” Williams said.

Last, but not least, a female EAB lays anywhere from 40 to 100 eggs. “The Emerald Ash Borer is truly a death sentence for trees,” she said.

Plzak suggested a couple of scenarios for Door Bluff Headlands.

• Do nothing and let the EAB have its way with the Ash trees. Within five or so years of its arrival, the Ash trees in the park will be decimated.

• Harvest about a fifth of the Ash trees while they are still healthy, and then allow the forest to regenerate itself.

When the meeting was opened to questions from the audience, several people wondered about the damage that would be caused by loggers harvesting the Ash. One even asked if it wouldn’t be better to harvest with horse and wagon. Plzak said modern logging machinery would leave a much lighter footprint than horses and wagons. The only damage he could foresee is from the logging trucks carrying the lumber out on a newly resurfaced Garrett Bay Road. He suggested the town may want to hold off on resurfacing that road until a decision is made on the Ash.

Several others noted the pristine nature of the park and how it was meant to stay that way when legendary landscape architect Jens Jensen and the advisory board preserved the space as a park for future generations, to which Airport & Parks Committee Chair Charles Brann said, “We didn’t have the Emerald Ash Borer 75 years ago.”

The committee also learned that harvesting of Beech trees infected with Beech bark disease is taking place in Whitefish Dunes State Park and planned for Peninsula Park, and since there are also Beech in Door Bluff Headlands, they should be considered as well.

The committee decided it had much to chew on and will deliberate more on what to do about the advancing EAB. Its next meeting will be held 8:30 am on April 4 at the Cherryland Airport, Sturgeon Bay.