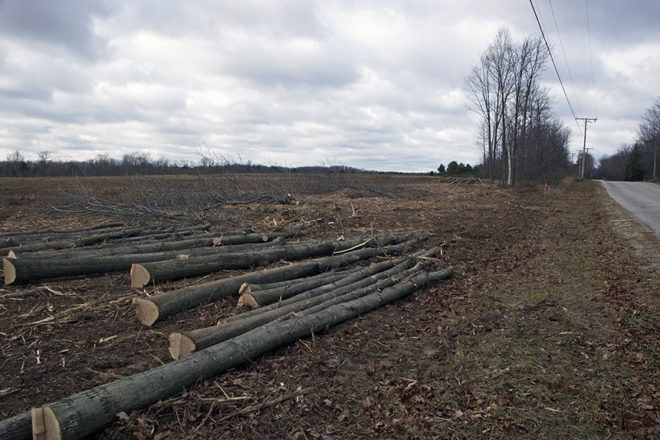 Maple Grove Road looks bleak where trees have been removed in order for aircraft to land safely at Ephraim-Gibraltar Airport. Photo by Jim Lundstrom.

Residents near the Ephraim-Gibraltar Airport were surprised after being told there would be some brush cutting and tree topping around the airport to find a clear-cut operation that leaves a section of the airport along Maple Grove looking like a bomb was exploded there.

Fish Creek resident Tony Fiorato, who lives on Gibraltar Road, just around the corner from the airport, brought the tree-cutting work up last week at a Gibraltar Town Board meeting and asked for better communication in the future. He said residents were told there would be brush cutting and tree topping, and later learned that only applied to residences and that wholesale clear-cutting was taking place at the airport.

“You could have bombed it. It’s totally clear cut,” he said, adding that it’s disappointing to people in the neighborhood to see that many trees removed from the side of Maple Grove Road.

“I just feel that it was not communicated very well and I would hope that would not be the case in the future,” Fiorato told the board. 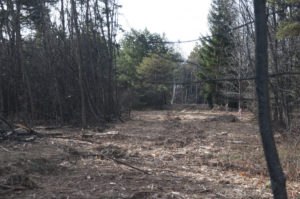 Tree removal near the Ephraim-Gibraltar Airport. Photo by Keith Wickert.

There was speculation that the massive tree cutting was done to prevent deer on the runway, and that the tree-cutting operation was related to the Sept. 18 crash at the airport that killed pilot Ralph Keller and 16-year-old student pilot Olivia Dahl. But Tony Molinaro, of the FAA’s Public Affairs, said it’s part of an airport safety program that has been going on for the last couple of years.

“Our flight safety experts have been looking all over the country at approaches to airports and making sure planes have a clear path,” he said. “They have a certain angle they need to go in and if they think trees are in the way, they will let the airport know.”

Someone had referred to the tree-cutting project as an FAA mandate, but Molinaro said the FAA doesn’t do mandates. They simply suggest the airport cut the trees, and if the airport chooses not to do so, the FAA will no longer allow planes to land there.

Ben Backus, chair of the Ephraim-Gibraltar Airport Commission, said approximately 55 acres of trees will ultimately be cleared from the airport property.