Door County, with its 250 miles of shoreline, more than any other county in the country, attracts a very large population of summering Tree Swallows. Undoubtedly they rank near the top in value of all transient fair-weather passerine visitors to this elongated land of scenic beaches. The Tree Swallows’ contribution of ridding these lovely vistas of a multitude of insects makes for more pleasant work and play.

Unlike the other swallow species that nest in Door County, the Purple Martin and the Barn, Cliff, Bank and Northern Rough-winged Swallows, the Tree Swallows don’t migrate any farther each fall than they have to in order to be able to catch insects on the wing. Many over-winter, for example, in the southern states along the coast of the Gulf of Mexico and throughout the state of Florida. We watched enormous flocks of hundreds hunting insects in winter over the vast marshes near Savannah, Ga. several years ago. They become highly social following the summer nesting season and will often congregate by the thousands during migration and at their roosting sites. Our bird phenology records indicate that we usually see the first ones arriving in Door County in early April. 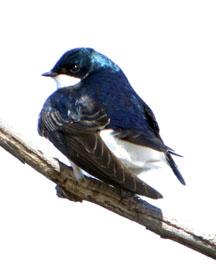 A Tree Swallow waiting for food to go by.

These skillful winged hunters prefer marshes, open fields and shore areas. Fortunately these hardy birds can survive in the face of adverse weather because of their ability to find and consume seeds and small fruits. It is thought that their diet consists of about four-fifths insects and one-fifth vegetable matter.

Tree Swallows are facing a “housing” shortage due largely to the fierce competition from the European Starlings taking over virtually every natural tree cavity available, and also to people wanting cleaner neater woods. The old dead tree snags, rich with good nesting sites, are fast disappearing. It was in 1977 that we bought our mostly wooded property and erected around a half dozen “bluebird” nest boxes along the western boundary adjacent to an open field. Practically every box was used by a pair of Tree Swallows until the spring of 1982 when we had electricity brought in to our new home site. These overhead power-line hunting-perches are what the Bluebirds needed and soon they too were nesting.

Fortunately people have had a very favorable impact on the total numbers of these sleek graceful swallows. Hundreds of new bird houses built and set in place annually in the county have helped these birds considerably in their constant search for suitable nesting sites. I realize that Tree Swallows themselves are scrappy competitors for nest boxes and have been known to pester Bluebirds continuously until the Bluebirds leave to search for another nesting site. Please don’t allow a few examples such as this lead you to believe that this is always the case. Bluebirds can and will stand their ground quite well.

Once the swallows have successfully built their nest they do not defend their nesting territory until the eggs have been laid and especially after the eggs have hatched. Expect to be “dive-bombed” if you get too close to their nursery! Actually a pair of Tree Swallows will tolerate another nesting pair of Tree Swallows as close as 25 feet or so, but not any closer. These strong fliers will forage for insects as far away as three or four miles from the nest while a pair of Bluebirds will strongly defend their nesting territory of approximately two acres, which is where they will find all of their insect food. Herein lies the reason why the Bluebird nest boxes should be placed at least 100-200 yards apart for best results.

Our years of working with Bluebird trails has led us to realize that the closer to bodies of water the nest boxes are placed the more likely it is that Tree Swallows will occupy them. Our trail of 50 Bluebird boxes this spring has around 17 Tree Swallow nests. Let’s face it, these birds are a very important part of the bird world too. By the way, Tree Swallows are single-brooded birds while nearly all of the Eastern Bluebirds in our region are double-brooded.

We carefully monitor our nest boxes and have learned that Tree Swallows generally use somewhat coarser, wider pieces of grass and most often form the “egg cup” of the nest quite close to the rear of the cavity. The egg cup of a bluebird’s nest is usually quite centered and is made of finer grasses than the swallows’ nests. Lastly, the swallows prefer to add several feathers, predominantly white, to cover and perhaps to help insulate the eggs and young. Bluebirds seldom use feathers in their nest construction. 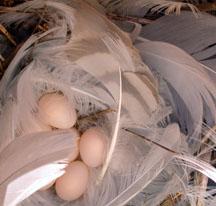 The Tree Swallow nest with white eggs and feathers.

Years ago, with many farmers raising chickens in the county, the swallows had an easy time finding white feathers for their nests. Today, with the chicken production down considerably in the rural areas, the Tree Swallows are gleaning the shorelines or fields for small gull feathers that have been preened. I shall always remember watching a Tree Swallow flying toward me along the shore of the Baileys Harbor Bay one early May when I worked at the Ridges. Much to my surprise the tiny bird was carrying what appeared to be a foot-long gull wing feather, which was producing so much torque and resistance that about every 30 or 40 feet the swallow had to drop the feather. It immediately swooped down, caught the feather in mid-air and proceeded to fly toward dry land to the west. I can only wonder what the bird did in trying to get the long feather into a very small nest box opening. Hopefully the bird was using a natural cavity with a much larger-than-usual entrance. 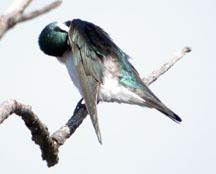 A Tree Swallow preening and cleaning its feathers.

We’ve enjoyed on occasion listening to the outpouring of delightful, peaceful, gurgling songs coming from a male Tree Swallow as it serenaded his true love perched on top of a nest box. Perhaps it could be said that she was only one of his true loves because the male Tree Swallows are known to be somewhat polygamous. Even stranger things are known to occur while the young are being fed in the nest box. There was one instance where two males and one female were all cooperating in feeding the brood in one house. Perhaps one of the males couldn’t keep all of his mates and their nest boxes straight!

Any creatures that devour as many insects as these sleek, iridescent blue-green-backed white-bellied swallows are bound to be looked upon as highly beneficial, good to have around. “Tree cheers” for the Tree Swallows!