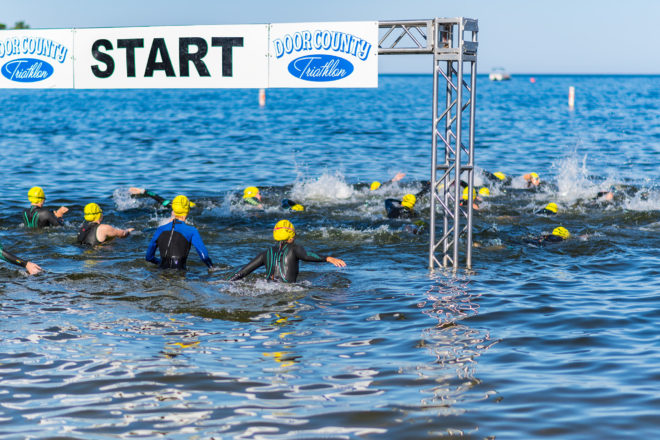 Participants in the 2019 Door County Triathlon experienced a “wave start” during the first leg, but organizers are switching to a “time trial start” for the 2021 event. Photo by Len Villano.

A year after the coronavirus pandemic canceled the 2020 Door County Triathlon, race director Sean Ryan is hopeful that triathletes will step up to the starting line again July 17 and 18.

“I’m feeling some level of optimism that the worst is behind us,” Ryan said. “I’m confident we can conduct the event live and in person this year.”

COVID-19-conscious event modifications include expanding the packet pickup times before the race and eliminating points of close personal contact as much as possible during the race. For example, instead of aid-station volunteers handing water cups to the athletes, volunteers will fill cups and set them on a table.

“The athletes may need to slow down for a second or two to grab the water, but these are important modifications we need to make to be responsible members of the community,” Ryan said.

Other modifications include grab-and-go food at the finish line and using self-applied temporary race-number tattoos, underwritten by Door County Medical Center, instead of having race volunteers mark athletes with permanent markers.

But perhaps the biggest change triathletes will notice is the move from a “wave start” to a “time trial start.” Triathlons always involve three components: swim, bike and run, in that order.

“Previously, we started everyone in waves according to their age and gender bracket,” Ryan said. “That could be 50 to 100 people.”

Using a time trial start, triathletes will line up by race number, and a starter will tell them to begin at a rate of one competitor every three to four seconds.

Aside from encouraging more social distancing between triathletes, a secondary benefit of the time trial start is its appeal to participants who may feel anxious about the more common wave start.

“Some races made this change even before COVID because when you’re going into the water with a thrashing mob of humanity, it can be intimidating,” Ryan said.

The challenges of navigating race modifications aside, Ryan welcomes the return of in-person events.

“I spent at least half of last year feeling completely nonessential because [as a race director] I didn’t have work,” he said.

Until late fall, that is – when he put his skill set to work for Bellin Health. Ryan organized five vaccine clinics, including at Lambeau Field.

“It felt good to be needed and a part of the solution,” he said. “They’re not used to setting up large, temporary operations like that, but as a race director, you know exactly who to call for what equipment and how to lay it all out for maximum efficiency.”

As rewarding as the experience was, Ryan doesn’t hide the fact that he’s happy to organize races again.

“Last year, athletes had their hopes dashed month after month,” he said. “The audience has been quietly and patiently waiting, I think, for assurance that the race will go on. I think they’re a little shell shocked right now at the thought of something actually taking place.”

It’s a welcome sign to race directors and athletes alike that life is slowly shifting back to normal, although some athletes never stopped competing entirely. Sverre Falk-Pederson, who has competed in every Door County Sprint Triathlon since its inception, continued to train throughout the pandemic, even in the absence of events.

“Most people who compete in these types of events treat it like a lifetime sport,” he said, “so they’re just going to continue to do what they’re doing. The event is just a carrot. It’s the final thing to evaluate how your training went.”

Falk-Pederson, who lives in Egg Harbor, said he rides the Bay Shore Drive portion of the route three times a week during the summer. Additionally, he and a core group of friends continued to meet for regular runs and rides throughout the past year.

“These are people I trust with my life on the road, so I trusted them to do their due diligence and act prudently when we met up during this COVID crisis,” he said.

Even though the pandemic didn’t cancel Falk-Pederson’s training routine, he’s looking forward to stepping up to the starting line for the Sprint Triathlon in July, if for nothing more than the camaraderie that such events cultivate.

“The races validate your training, and you look forward to that,” he said. “But mostly, we all get together and complain about what we did wrong and what we’re going to do right next year. It’ll be nice to see those people again and bridge that friendship gap that’s been there for almost two years.”