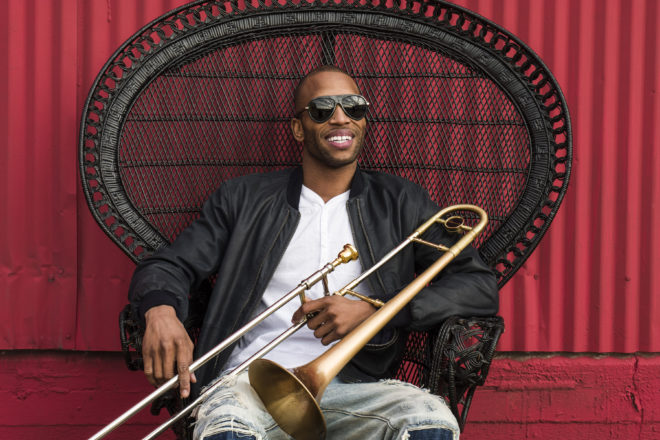 Even though his stage name is Trombone Shorty and the trombone is his primary instrument, Troy Andrews is a multi-instrumentalist who credits his wide-ranging musical influences to his New Orleans heritage.

So it has to be asked in a telephone call to Pittsburgh, where he and his band, Orleans Avenue were performing on June 5, what if the first instrument he was introduced to had been the glockenspiel, because who wants to be known as Glockenspiel Shorty?

He laughed and said, “I never thought about that. Right now I play about 10 or 12 different instruments. Growing up in a musical family, you get to jam and play. I had a piano at my house, a bass guitar, trumpets. Even though trombone was my primary instrument, I was able to jam around and figure out the mathematics of how to play those different instruments. Actually, I think I started to play some drums before the trombone. What little kid wouldn’t be interested in banging on things?”

Anyone who has heard his latest recording, the 2017 release Parking Lot Symphony on the Blue Note label, knows the trumpet has become as important to Andrews as his namesake instrument.

“I’m trying to get myself to where there’s nothing I can’t do if I had to play the trumpet the whole night,” he said. “When I took up trumpet, I just wanted to make sure I wasn’t stronger at one. I wanted to be able to do both.”

He recalled doing a show one night when he hit his trombone on something.

“I couldn’t move the slide,” he said. “I was able to pick up the trumpet and finish the song with no hiccups. Mathematically I transferred the information theoretically to the trumpet. I love it.”

Being from a well-known musical New Orleans family – grandfather Jesse Hill’s 1960 release “Ooh Poo Pah Doo” reached the Top 5 in the U.S. Billboard R&B charts and has been covered by more than 100 other artists ranging from Chubby Checker to the Steve Miller Band to Trombone Shorty; and his older brother James Andrews, a trumpeter and bandleader – helped define Andrews’ future. But he credits the city of New Orleans itself for his organic musical diversity.

“It is a definite impact and influence from the city of New Orleans,” he said. “We have so many R&B artists, Mr. Allen Toussaint, Dr. John, Cowboy Mouth, great hip hop. We’re all about finding a way to work with each other on common ground. I can definitely say, if I wasn’t from the city, my style wouldn’t sound the way it does. Just to have those different influences popping in, and experiences, to be able to work in all those different neighborhoods and have that impact and influence me, and bring it back to my music without even thinking about it is a beautiful thing.”

Andrews’ previous recordings – Say That to Say This (2013), For True (2011) and Backatown (2010) – were for the Verve label. So what was it like to switch to the venerable jazz label Blue Note, which since 2012 has been led by award-winning producer and musician Don Was of Was (Not Was)?

“It was cool,” he said. “I was signed to Universal Records, who actually own Verve and Blue Note. My last record we moved over to Blue Note. It was great to get this album out with some new energy and new excitement, and to have Don Was president over there. He’s a great, great musician.”

Andrews and his band are known for putting on exciting shows, which has him thinking of a live CD as his next release.

“I’ve been thinking about it for some years now,” he said. “I might even start setting up in certain places this year, recording certain shows and pick which ones sound great. Sometimes we get on stage and jam out for 10 minutes on a whole new jam and it creates a whole new song. I think I want to do maybe a live DVD or live film, and we can take the audio from that and make it into a CD. I’m definitely working on that.”

In the meantime, Trombone Shorty will play his music on the stages of the world.

“I don’t have no backup plan. Music is my life,” he said. “Whenever I get a chance to play, I play as if it’s my last time, no matter where I am and no matter if it’s a sold-out show. It’s always there in my mind that these people are seeing me for the first time. That’s how I approach the stage.”