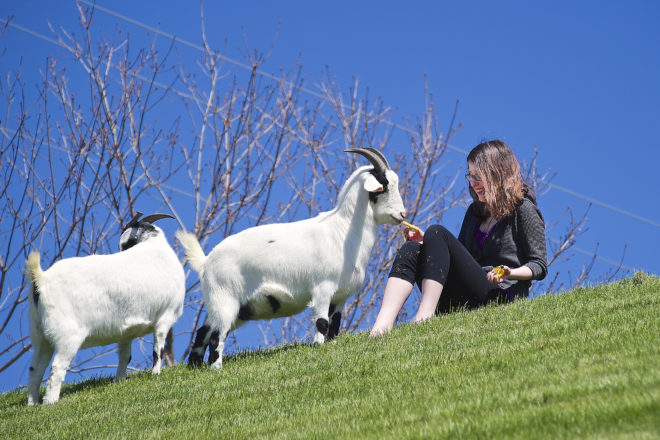 This weekend is all about the goats in Sister Bay. Photo by Len Villano.

The Door Peninsula grows bright green in May and June, signaling the start of another summer. In the Town of Sister Bay, the return of green grass – particularly that found on the roof of a particular Swedish restaurant – means it’s time for one of the county’s most unique festivals.

On June 11, Al Johnson’s Swedish Restaurant will host its second annual Goat Fest, celebrating the beginning of the summer season as well as the town’s Scandinavian heritage.

Prior to the festival will be the fourth annual Roofing of the Goats Parade, in which goats from Al Johnson’s will proceed through downtown Sister Bay and take their place on the restaurant’s grassy roof.

The Al Johnson’s goats, of which there are usually between 20 and 25, live on a 40-acre farm in Sister Bay owned by Lars Johnson, one of Al Johnson’s children. Kit Bütz, the restaurant’s media manager, estimated there were about eight kids born on the farm this year. Additionally there are many seasoned goats, as well as a few that have retired from their roof-grazing days.

“We’re going to try to get every one around [for the parade] except for the older goats,” Bütz said.

The Door County Creamery’s goats will also be participating. Other goats are welcome to join the parade, so long as they are leashed.

“We want it to be all inclusive,” said Bütz. “We want to bring in the entire community.”

Parade attendants can also participate in the parade with “goat drop” stickers. The biodegradable stickers are available for sale at Al Johnson’s and Husby’s and are placed on the parade route. If a goat poops on your sticker, you become eligible to win a TREK Electra Cruiser or one of the many prizes donated by various local businesses.

Proceeds from sticker sales go to Koinonia Kupboard, a food pantry supported by the First Baptist Church of Sister Bay. The pantry has been working to serve the residents of northern Door County since the 1980s.

“Last year we were able to donate about $800,” Bütz stated. “We’re hoping to double that this year.”

The food pantry will also have a tent set up during Goat Fest where they will accept canned food donations. The pantry, which operates year round, often sees its stocks depleted after the long winter.

Following the parade, people can continue their goat-related celebrations at Al Johnson’s, where there will be food, music, and a Swedish pancake-eating contest.