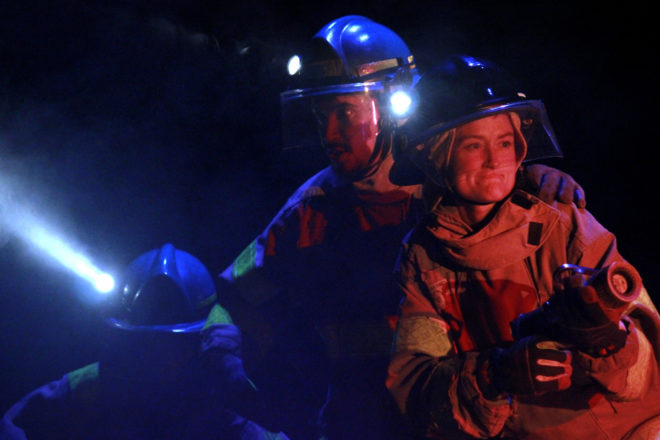 Population 485: On Stage will be on stage at Trueblood Performing Arts Center on Washington Island on July 8 at 7:30 pm.

This dramatic and hilarious live performance (based on the bestselling book by New Auburn native Michael Perry) goes behind the scenes of a small-town fire department when a former resident returns as a green rookie. Through a series of fire and ambulance calls, the characters and audience travel together through history and humor to a place where neighborliness is a necessity – especially when hope and heartbreak collide.

Set in rural Wisconsin, the play features a farmer’s wife armed with a pistol and a Bible, a firefighting butcher with one kidney, one eye and two ex-wives (both of whom work at the only gas station in town), among a host of other characters.

Population 485: On Stage tells the story of volunteers who answer the call 24 hours a day, whether it be for burning barns, “tip-ups,” or fainting geese. When the pager goes off they are no longer just the school cook, roofer, bartender, police officer, logger, trucker, accountant or farmer. They become firefighters and first responders, helping their distraught neighbors, one call at a time.

Adult tickets are $20, $15 for students and free for 12 and under are free. Purchase tickets online at truebloodpac.com.