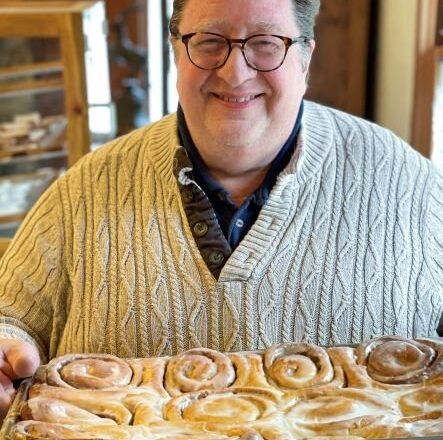 Take the stress out of the Thanksgiving spread

I’m no cook, but I love food, so I surround myself with great cooks. Usually I go to my brother-in-law with culinary questions because the guy is a wizard in the kitchen. But, although he’s one of the better chefs I know, he’s been out of culinary school for only a few years, so when I’m looking for tips on the Thanksgiving turkey, I know I need someone with more experience. Luckily, the apple doesn’t fall far from that tree because if there’s one person I know who’s better than my brother-in-law at all things turkey, it’s his dad, Dave.

Dave’s been a professional caterer and restaurateur for more than 30 years, and during that time, he’s cooked a turkey or two. Whether it’s serving 25 of us around the family table or 2,000 strangers during a catered event, he definitely knows how to make Thanksgiving-morning cooking easier, less time consuming and tastier.

Tip number one, Dave said, is, “Don’t overplan. I think people often make way too much. If a recipe says it serves 10, and you’re making it for 30, don’t make three times as much.”

That’s because there’s so much to choose from on the table, so no one is going to eat an exact serving of every single thing. Make a little bit less of each item than you think you’ll need, and maybe that way, you won’t have leftovers for the next six weeks as you usually do.

I asked Dave whether there’s a difference between prepping a turkey for a small group and a large group, and he said there really isn’t – especially if you use his second tip, which is all about the pre-Thanksgiving preparation.

“I’ve done turkey a lot of different ways,” he said, “but I’ve found that brining the turkey has a ton of benefits.”

It might take up a bit more room in your refrigerator, but brining the bird for three days in a mix of salt water and whatever kind of herbs you like will infuse flavor and moisture. Dave uses a large pot, but you can buy a brining bag to do the job. Beyond the flavor and moisture, brining means you don’t have to do nearly as much basting while the turkey cooks, which cuts down on the cooking time.

Another time saver is to prepare your stuffing outside the bird.

“Growing up, we always stuffed the bird, but I like to do my stuffing outside of the bird because it takes a ton of time out of the cooking,” Dave said. “It takes forever for the stuffing to reach a safe internal temperature, so it’s safer, too, from salmonella.”

With the prep done and the cooking time cut way down, there’s one last thing you can do to really lock it all in – and it’s as easy as doing nothing at all.

“If you do nothing else,” Dave said, “absolutely do this: Let the turkey sit for 20-30 minutes before you cut it. The sitting lets the moisture settle. If you cut too soon, you’ll have a dry bird.”

The nice thing about Thanksgiving dinners is that they’re steeped in tradition, and each year that you prepare one, you get better and better. If you’ve cooked as many birds as Dave has, however, the best tip might be to try something new.

“You don’t always have to make the exact same Campbell’s green-bean casserole with the French onions on top,” Dave said. “I’ve wanted to try something like fried brussels sprouts with goat cheese, or a balsamic vinaigrette salad – something more modern. The nice thing is, that would bring the traditionally high calorie count down, too.

Above all else, Dave has this to say: “Have fun with it, and don’t get stressed out. If you do a bit more prep ahead of time, everything else will come more easily.”