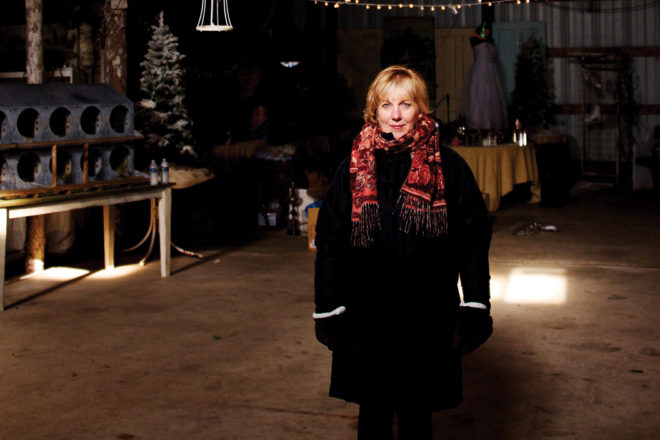 When Angie McMahon took a road-trip around her home state of Texas with her mother 25 years ago, they stopped at a shop in the Hill Country. “This woman had this mix of old and new things, like furniture and bedding,” recalls McMahon. “I was like, ‘This is what I want to do.’”

Since the shop closed in December 2012, McMahon has focused her energy on running vintage markets and events such as “Say Yes to the Paper Dress.”

The event, a brainchild of McMahon and Debbie Frank, was held September 14 in McMahon’s barn. The fundraiser featured an array of paper dresses – small and large, from sculptures to paintings to wearable dresses – created by 26 Door County artists. The dresses were auctioned off at the event, which raised $2,860 for We Are HOPE, Inc., an organization that helps individuals find employment, conserve energy, and improve their homes.

“We weren’t sure if we would even have 10 people show up and we’re thinking we had about 150 to 200,” says McMahon. “Right away there was a warm and friendly, buzzy kind of atmosphere. Sandy Duckett and Gina Wautier from We Are HOPE gave a very moving speech about the needs in the county and how they have been able to help so many…with many still needing a hand.”

The idea for the event came a few years prior, when McMahon created a dress made out of tissue paper for Frank. “Debbie and I got together one winter and I made this big dress for her. We decided we wanted to get together and make paper dresses and then we thought, let’s make it a fundraiser and it’s evolved over the years.”

In early August, “The worst time to ask anyone in Door County to do anything,” laughs McMahon, she and Frank hopped in a car and decided to ask artists to create a paper dress to auction off.

“We took a day, started in Gills Rock,” explains McMahon. “All we did was drive down to Sturgeon Bay and go from gallery to gallery. We started at Turtle Ridge and would ask artists, ‘Will you make a paper dress?’ By Sister Bay, we had 20 artists signed up. In two hours!”

Just a few of the participating artists included Cynthia Wolfe, Stephanie Evans, Claire Erickson, Kay McKinley, Jeanne Aurelius and Liz Maltman. “The artists were so generous,” says McMahon. “We asked, ‘Would you do this?’ And they didn’t hesitate. They said, ‘Yes’.”

The generosity of the attendees and owners of Nistebox, which served food at the event and donated 25 percent of their sales (10 percent more than agreed) to HOPE, surprised McMahon as well.

“I learned about generosity putting on this event,” says McMahon. “People are so generous. I was blown away. And there was something different about Paper Dress, there was a magic about it.”

McMahon and Frank plan to do another fundraising event in the future, incorporating their skills of event planning and creating beautiful artwork. “We may not have paper dresses next time, but it will be something creative,” says McMahon.