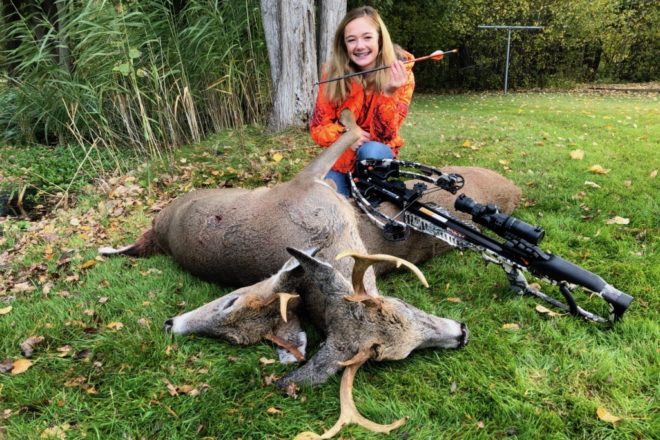 It happened Oct. 25 in Door County

One of the most unusual deer tales you’re likely to hear this season happened to a youth hunter in Door County last weekend.

Fourteen-year-old Matiah Christensen of Green Bay was hunting from a covered tree stand Oct. 25 with her uncle Collin Jeanquart and cousin Sydney Jeanquart on property owned by another uncle, Chris Jeanquart. In hopes of seeing an older buck, Christensen passed up a three-pointer several times that evening. Her patience was rewarded when an eight-point buck stepped into view just before quitting time.

She waited until she had a clear shot at the larger buck and pulled the trigger of her dad’s crossbow.

Fast forward to an hour later, when Chris took in lights and a search party, which soon found the broadhead-tipped bolt (a crossbow’s version of an arrow) and followed the blood trail to a three-point buck.

“I was upset because I didn’t want to shoot that one,” Christensen said. “I told them, I know I shot the eight-pointer. They could tell I was mad, so we went back to the original spot.”

A little more searching revealed a second blood trail going in the opposite direction, and fewer than 100 yards farther, a dead eight-pointer.

“I was very excited and kind of relieved because I knew I aimed right,” Christensen said.

The target deer was hit where she had aimed – through the lungs – and the other buck, which was off to the side and out of the sight picture, appeared to have taken the broadhead to the neck following a freak ricochet as it exited the eight-pointer.

After reporting the incident, DNR Warden Chris Kratcha investigated and found no evidence of anything other than what Christensen had experienced.

“They still had to seize [the three-pointer], but the guy who wanted the meat let me keep the antlers,” Christensen said. “I was glad that it would help feed another family.”

Christensen shot her first deer on her first day of hunting with a gun in 2016. She hunted one day with a crossbow in 2018 and shot a doe. Last Friday was only her second time out this season.

Christensen said she’s the only girl who hunts and fishes in a class of 50 or so at St. Bernard’s Catholic School in Green Bay, and that only a few boys hunt.

She’s active, playing basketball and volleyball and competing in triathlons. She loves to fish, and she said she’ll probably continue to hunt when she’s older.

“It’s the experience, just being out there in nature and seeing the animals,” Christensen said. “And, trying to keep quiet when someone makes a funny noise.”

An assessment of the first five years of legalized “crossbows for all” in Wisconsin found no biological concerns about the current or anticipated number of bucks or total deer harvested under the current crossbow-season structure.

Earlier this year, the state Natural Resources Board (NRB) received a seven-scenario proposal to shorten the crossbow deer season. At that time, DNR wildlife director Eric Lobner said the seven options introduced “are not the gospel” and could be completely thrown out.

Prior to 2014, only those with certain physical limitations and hunters aged 65 and older were allowed to use them.

The scenarios were crafted after NRB member and longtime DNR deer-management critic Greg Kazmierski requested some hypothetical changes that could “equalize” buck-kill success rates for all users – bow, crossbow and firearm.

It’s hard to say exactly how many combined bow and crossbow users there are because the numbers include crossbow-license purchasers who also purchased the bow upgrade, as well as archery-license buyers who purchased the crossbow upgrade. That allows them to use either weapon (though they do not receive additional harvest tags).

Nearly 54,000 Conservation Patron licenses were purchased, allowing the buyer to hunt with both bow and crossbow. That makes knowing how many hunters use bows versus crossbows impossible under the current license-issuing system.

The 140-page “Wisconsin’s Evaluation of Crossbow Use and Season Structure” report is available on the DNR website.

Any future discussion about adjustments to the crossbow season or license structure, it states, “are social issues that are best informed through hunter surveys and contacts with the hunting community.” Addressing those social issues, the report further states, “are likely far more challenging than dealing with the biological aspects of deer management.”