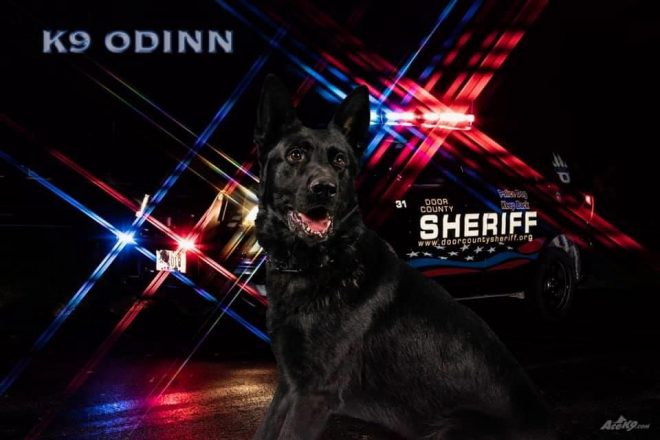 Fundraisers are being held for the two new K-9 deputies that were authorized last month for the Door County Sheriff’s Office.

One of the dogs will be a dual-purpose patrol dog trained in detection, apprehension and subduing a suspect if necessary, like Deputy Odinn, the Door County Sheriff’s Office K-9 who died last June. The second dog would be trained strictly in tracking and detection for missing persons, narcotics and community service.

The Door County Board of Supervisors authorized up to two K-9 units during its August meeting. Initially, the resolution was open ended, establishing the “formation and maintenance of a canine unit consisting of multiple deputy sheriff and dog teams.” After some discussion, the supervisors revised the resolution and capped it at two dog teams.

With only one dog, Odinn’s handler, Deputy Matt Toussoul, had been required to always be on call, said Chief Deputy Pat McCarty.

The estimated budget to bring the dogs on board is $24,650 to replace Odinn and $33,700 for the second dog. The difference is that the equipment purchased for Odinn – squad-car inserts and a kennel at the deputy’s home, for example – can be reused.

Lodging and meals for the initial six-week training is estimated at $9,500 for each handler. McCarty said during the board’s August meeting that training is done in New Mexico, where Brown and Outagamie county officers also attend training.

“As a new K-9 trainer, we wanted a support network in northeast Wisconsin,” McCarty said, “but the K-9 addition will reduce that cost significantly by getting a kennel dog from here in Wisconsin.”

Each K-9 officer’s salary is increased by $7,126 annually to compensate the officer for caring for the dog outside of working hours, according to the fiscal-impact statement included on the resolution passed by the county board.

McCarty said they’re currently negotiating collective bargaining agreements, and both sides are looking for ways to reduce that fiscal impact.

“We need to compensate the K-9 handlers, but that is being looked at,” McCarty said.

The $58,350 in start-up costs for both dogs is intended to come from donations. The Door County Sheriff’s Office Crime Prevention Foundation helped to purchase and train Odinn and pay for his ongoing veterinary services, safety equipment and further training. That organization is again raising money for the two new K-9s.

Sheriff Tammy Sternard said that giving to the foundation is one of the easiest ways the public can help the sheriff’s office carry out its mission of preventing crime and strengthening relationships with the community.

“We feel that the K-9 units match that mission perfectly,” Sternard said.

The Crime Prevention Foundation is a partnership between the Door County Sheriff’s Office and the Door County Community Foundation. To learn more or to make a donation, visit safedoorcounty.org. All donations are tax deductible.

Other programs that the Crime Prevention Foundation helps to fund include school resource officers, the DARE program, Chop ’n Shop with a Cop and the CRAVE 21 Challenge.