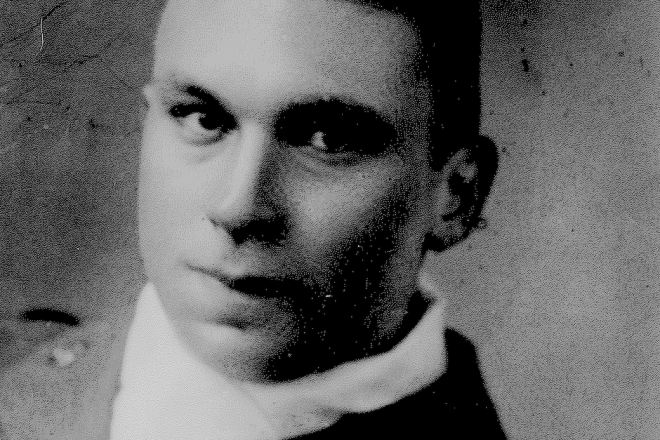 While Carl Scholz was serving in Morioka, Japan, a Japanese photographer took this picture of him in uniform. It was the photographer’s idea to place the scarf around Scholz’s neck. “Not something I would have done,” Scholz said. Submitted.

After graduating from high school, two friends from Port Washington, Wisconsin, enlisted to serve their country during World War II. Both were sent to Camp Dix, New Jersey, in preparation for their service.

One was Joe Demler, who would head to the European Theater and be captured during the Battle of the Bulge. When liberated from the Nazi prison camp, he weighed just 70 pounds and was described as “the human skeleton” when he appeared on the cover of Life magazine. He died in 2020 at the age of 94.

The other 17-year-old was Carl Scholz, a longtime superintendent of Sevastopol Schools and an even longer-term supporter of Door County’s beauty and ecology. Before he arrived at Sevastopol in 1951 as a 23-year-old first-year teacher, he’d had another, very different career as a paratrooper in the 11th Airborne – part of the 511th Parachute Infantry Regiment in World War II that General MacArthur called his “secret weapon.”

Scholz, 94, of Sturgeon Bay, believed that he, like his friend Demler, would be on his way to Europe. Instead, he was sent to Camp Stoneman in Pittsburg, California: the “jumping-off point” for more than 1 million soldiers destined for operations in the Pacific Theater. He recalled that the phone call to let his parents in Wisconsin know where he was going cost $12.

The 511th Parachute Infantry Regiment’s 204 days of combat in Guam, Saipan, Iwo Jima and occupied Japan are recounted in the book When Angels Fall: From Toccoa to Tokyo, by Jeremy C. Holm, grandson of 1st Lt. Andrew Carrico of Company D. (The regiment was originally formed at Camp Toccoa, Georgia.) Scholz was a radio operator who transmitted international codes.

The 11th Airborne arrived in Japan after the atomic bombs were dropped on Hiroshima and Nagasaki in early August 1945.

His initial assignments were guard duty and ski instructor – sometimes guard duty on skis and sometimes at night, which was dangerous. Later he served as a librarian in Morioka, Japan, with Japanese assistants.

On May 1, 2014, nearly 70 years after his honorable discharge from the Army, Scholz and his family were invited to Sevastopol to talk about establishing a scholarship in his name. The actual purpose was a surprise to Scholz: an all-school assembly to honor the former superintendent before his May 3 Stars and Stripes Honor Flight to Washington, D.C.

All the school staff and student body, plus a number of community residents, were present. After music and talks by Mike Madden, a former student and longtime colleague and friend; as well as Scott McFarlane, Door County’s veterans service officer, Scholz expressed his thanks to Sevastopol, never missing an opportunity to relate that the Greek name means “a place of glory.” He suffered from mobility problems, but he stood at the end of the program to shake hands with hundreds and hundreds of the students.

Scholz’s son Jon went along on the Honor Flight, which his dad described as “unbelievable.” A crowd of hundreds greeted the honorees when they returned to Mitchell Field in Milwaukee. The trip was even more memorable because it, like all other Honor Flights from the area, was arranged by Joe Demler, Scholz’s old friend from high school.

The exceptional patriotism that led Scholz to enlist with the paratroopers at age 17 may have been inspired by his father, Philip, who served in the Army during WWI.

While fighting on a very dark night, not far from enemy lines, one of his comrades lit a cigarette, unwittingly letting German observers know where the Americans were located. An immediate “box barrage” of bombs surrounded the spot where the light had flickered. Many of Scholz’s comrades were killed, and he was injured so badly that he spent months recovering in a London hospital. He is believed to have been the very last WWI veteran from Wisconsin to return home.

Many years later, when Carl Scholz’s sister, Harriet Kapp, heard that the Library of Congress was planning From the Home Front and the Front Lines exhibits honoring WWI veterans, she typed copies of all the letters her father had written home and sent them to Washington, D.C., along with other mementos. Philip Scholz was named a Genuine American Hero. Harriet died before the exhibit opened, but Carl; his wife, Ruth; and their children were invited to the opening.

“Imagine our surprise,” Ruth said, “when we arrived at the Library of Congress and met a life-size cardboard image of Carl’s dad at the front door!”

A Year at the FBI

While Carl Scholz was serving in the Pacific, Ruth Knowles, later to be his wife, was also in government service. As a 17-year-old high school senior who planned to work for a year before starting college, she had been hired by a local bank.

That changed when a recruiter for “government girls” visited the school, describing exciting jobs with the FBI. When the recruiter offered a ride in his jeep to anyone who signed up, Knowles opted for the Washington, D.C., job.

After school, she went by the bank and resigned before going home to share all the news with her parents.

“At first, I was assigned to filing,” she said, “but then was promoted to fingerprints, and that’s where I was when we got the word that President Franklin Roosevelt had died.

“I’ll never forget the comments by the agents who came into the office, really upset. ‘Truman is president?’ they said. ‘But he doesn’t know anything!’ Apparently, they were at least partly right. We learned later that the vice president had not even been informed that the atomic bomb was being created.”