Remember that horrible time shortly after 9/11 when everyone was supposed to move in lockstep for fear of letting the terrorists win? Remember Freedom fries?

For those of you who don’t remember them, Freedom fries were the superpatriots’ answer to France’s refusal to accept our anti-terrorism policies. French fries are now Freedom fries. Take that, France! 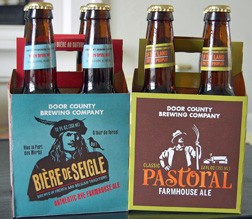 At the time I was writing about beer for a large corporate newspaper that distributed my beer column widely and internationally, but without any extra bulge in my pay packet (other than a fairly liberal beer budget).

I got so sick of hearing about Freedom fries and all the other nonsense aimed at a sovereign nation that has endured more than its fair share of terrorism throughout its long history that I decided one week to feature a French farmhouse ale. It seemed like the necessary time to do so. It was a delicious beer and I wrote fondly about it.

The first response I got was from a guy who said the only reason he would buy a French ale is to shove it up my Francophile a**. I told him to come on down here and say that. And bring the bottle of French ale. Never did see that guy.

The second response came about six weeks later when a semi-truck pulled in front of my house on a very quiet residential street. The driver got out, opened the back and removed a single box. Turned out it was a box of all the different styles of beer made by the brewer of the French ale I had praised in print six weeks earlier, along with a letter from the owner of the brewery, thanking me for writing about his beer in very troubling times. He said France was hearing only negativity from America, so it was heartening to know that not all Americans are crazy.

Best yet, all the beers inside were as delicious as the first one I had sampled.

And, so, farmhouse ales have special meaning to me. The concept behind them is simple – during the winter, the farmer (or, perhaps more likely back in the day, his wife) brews a simple ale to be put up for the farmhands during the summer months, something refreshing and alive in your mouth after a hard day’s work. How could you not love that?

Imagine my surprise when Door County Brewing Company recently issued its fourth and fifth releases, and both are farmhouse ales.

Pastoral is described on the label with a single word tucked under the elbow of a pitchfork-pondering farmer: Classic.

I would be one happy farmhand if I were getting this at the end of the day. It seems to fill the palate with brightness. Yes, it was a brutal day of toil in the hot sun, but, mon Dieu, another swig of that delicious saison (that’s what the French call farmhouse ale) and I will forget I have to do it all over again tomorrow and tomorrow and…

Well, there are many wonderful things happening in this beer for the farmhands, the farmer tells his wife, but maybe you should brew a special batch to dispense when we entertain our friends.

OK, I’m just guessing at the scenario above, but if it were the case, I think Pastoral’s companion farmhouse ale, Biere de Seigle, would be the farmer’s personal stash. It comes across as more elegant, more sophisticated, than Pastoral. Or is that just me and my love for rye?

Biere de Seigle is a rye farmhouse ale, and rye brings so much to the table. There is sweetness and spiciness and an unfathomable depth of flavor in this beer.

To attain such heights after only a year in operation – well, expect more great things from Brewmaster Danny McMahon and Door County Brewing.