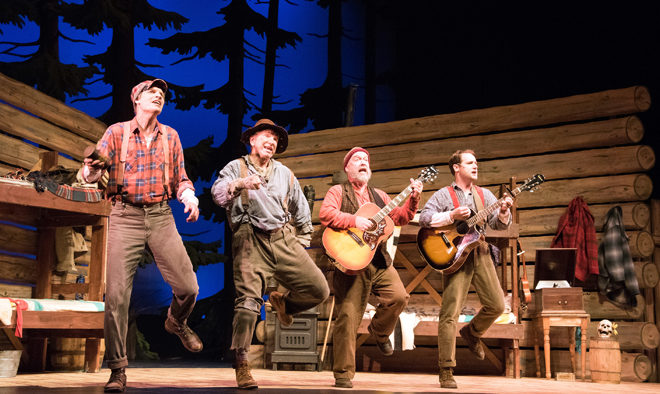 Northern Sky will premiere two new musicals next summer and offer a new twist on one of its all-time favorite shows.

Boxcar, written by Laurie Flanigan Hegge and James Valcq, is a “soaring, tender story about an unlikely friendship between a boy and two hobos” set in the 1930s. As this story unfolds, Boxcar draws on the deep struggles of 1930s era America while celebrating the ultimate triumph that comes from one human being coming to the aid of another in tough times.

“Laurie was one of the authors of Loose Lips Sink Ships and James composed the music for Victory Farm,” said Artistic Director Jeff Herbst. “It’s exciting to have these two accomplished artists collaborating for the first time on a Northern Sky world premiere.”

Dairy Heirs, written by new collaborators Joel Kopischke, Eva Nimmer and Alissa Rhode, is a “modern-day Moo-sical: home grown, hearty, plenty sweet with a side of tongue in cheek.” A sister and brother wrestle over the future of the family farm – a decision that affects the fate of neighbors, new loves, ex-loves, two wannabe twins, and a rather supernatural bovine diva.

Northern Sky’s most beloved show by Fred Alley and James Kaplan, Lumberjacks in Love, will make another one-show-a-week appearance, but this time around performances will be offered where the audience is invited to sing along and dress up as inspired by the show.

“We’re expecting hordes of Dirty Bobs, Blues Soaps, Annabelle Bravehearts, and lumberjacks of every shade and imagination,” said Managing Director Dave Maier. “We think this is a perfect way to celebrate the popularity and longevity of this Northern Sky gem.”

The summer season runs from June 13 to Aug. 25 at the Peninsula State Park Amphitheater in Fish Creek. There is no park sticker required to attend performances in the State Park.

Tickets will go on sale April 2 in the Northern Sky box office at the Green Gables shops in north Ephraim, via phone at 920.854.6117, and online at NorthernSkyTheater.com.