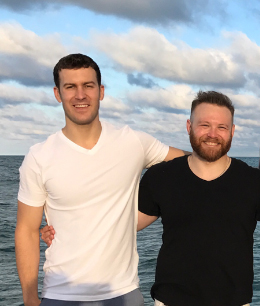 Two friends who traveled the width of Lake Michigan on a small sailboat in support of Great Lakes research gained a new respect for the lake.

Gusting winds and five-foot waves made for an intense eight-hour journey for Drew Fries and J.T Bohland, two pals who sailed from Two Rivers, Wis., to Ludington, Mich., aboard a Laser 2 on Sept. 15. A third friend pulled out of the trip. They made the voyage as an adventure and also to raise money for the Cooperative Institute for Great Lakes Research.

“It was an incredible day. I think we underestimated how intense it would be, and how physically and emotionally difficult it would be,” said Fries.

They were waiting for a mild day with about 15 mph winds out of the south. However, Fries said the wind gusted at times to as much as 25 mph.

“We actually capsized in the middle of the lake because the wind was so strong,” he said, adding that they were about three-quarters of the way through the voyage at the time of the capsizing. They were able to save all their gear and right the vessel to continue the trip.

Fries said so far the campaign has raised $1,900 (gofundme.com/the-lake-michigan-voyage).

“I’m hoping we continue to raise money even though the trip has been completed,” he said.

Fries said the voyage would not have come together without the help of his father. Derrick Fries, who taught him to sail and delivered the Laser 2 from his home in Detroit to Two Rivers, and then drove to the other side of the lake to greet the voyagers. The elder Fries, a professor in educational administration at Eastern Michigan University, is the author of Start Sailing Right, one of the most successful learn to sail books out there. He is also the original U.S. Sailing’s master instructor trainer, and holds six world sailing titles and 15 North American sailing championships.

“He was so proud and encouraging,” the younger Fries said of his father.