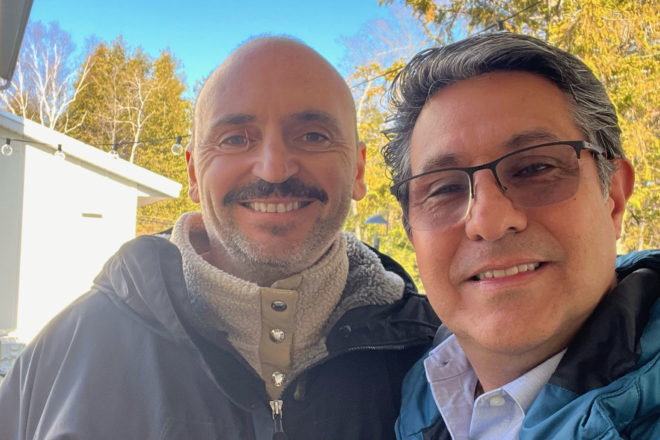 (From left) Stoyan Dimitrov and Gustavo “Goose” Gallardo – owners of Zero Sum and Goose & Twigs, respectively – are running fundraisers through May to house Ukrainian refugee families in Bulgaria.

Two Sister Bay businesses are housing Ukrainian refugee families through fundraisers they’re running through the month of May.

Stoyan Dimitrov, owner of Zero Sum healthy food and drinks, and Gustavo “Goose” Gallardo, owner of Goose & Twigs green lodging, coffee shop and marketplace, are donating the proceeds from the sales of coffee and baked goods to pay for housing in Bulgaria for one family – two parents and their child – as well as a mother with five children.

Normally, Gallardo doesn’t open until Memorial Day weekend, but he opened Thursday-Sunday at the beginning of April and is donating 100% of his coffee-shop proceeds to the fundraiser.

The families are being housed in Bulgaria through Dimitrov’s connections. He’s a Bulgarian native who came to Door County 22 years ago as a student, fell in love with the peninsula and remained, eventually becoming a U.S. citizen. His aunt in Bulgaria has handled the details of renting the housing for the families. Dimitrov also has a Ukrainian employee who traveled back to the region to help make arrangements.

Dimitrov said the first family of three had no place to go, and the housing has enabled them to stabilize their lives enough so that the husband has been able to start working in Bulgaria, again through a connection with Dimitrov’s aunt.

“The second family was in a lot worse situation,” Dimitrov said. “They were stuck on the border between Bulgaria and Greece. They had zero money, and not everyone had a passport because some of the kids aren’t old enough, and they simply didn’t have money for visas.”

Dimitrov said he worked through the Bulgarian consul in Greece and was able to get the mother papers before finding the family a two-bedroom home.

“We have funds for another family,” Dimitrov said. “We discussed if it’s better to help these two or a third. We will see how it goes. Perhaps we can raise enough money.”

The two businesses have run their fundraisers slightly differently, but they merge the proceeds to pay for the housing. Together, they’ve raised close to $3,000 to date, and they will run the fundraiser through the month of May.

“We would like to get $2,000 more,” said Gallardo, who built his nine-room, eco-friendly hotel and coffee shop from scratch in 2019. Gallardo is a Mexican native who fell in love with Door County after visiting with his wife, Renata, and they decided to open a business and make their home here with their two children.

Dimitrov said the next step may be to connect with a nonprofit organization that can handle the logistics.

“The difficulties are trivial – the moving of money, the coordination of things – but it’s logistical, and it becomes harder,” he said. “If you go through a nonprofit, all the fees are lower, and they already have established connections, and it’s more attractive to people to donate because of the tax write-off.”