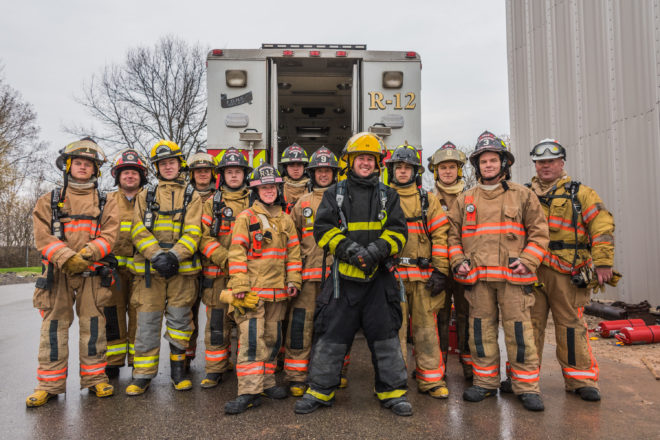 Almost 1.3 million fires were reported in the United States in 2014, according to a U.S. Fire Department Profile of that year released this past January by the National Fire Protection Association (NFPA).

Of the 1,134,400 firefighters who belong to the 29,980 fire departments responding to those fires and many other emergencies, 69 percent are volunteers.

Now if you are a follower of national magazines, that amount of volunteerism involved in an essential life- and property-saving element of communal living should concern you because recent headlines have declared:

Volunteering in America is on the Decline, Newsweek

Americans’ Interest in Volunteering and Charity is Precipitously Declining, Forbes

“Seventy percent of firefighters are volunteers, so if volunteerism is down, the nation’s in trouble,” he said.

Anderson manages a 10-man fire department that is stretched to its limits, to the point where the Gibraltar Town Board recently gave Anderson approval to start a recruitment campaign.

“We have really good people and apparatus, but we could use more people,” he said. “We’ll be sending out mailers and doing some advertising because volunteerism is so down and we need people. We’re trying to get people aware and looking if they’re interested.”

And on a very rainy Sunday, he and his colleague Mike Goldstone, assistant chief of the Sister Bay Fire Department, are indoctrinating a group of 11 recruits into the life of firefighting. It’s the final class in a 60-hour entry-level firefighting course, held on the Green Bay campus of Northeast Wisconsin Technical College.

The campus boasts a Public Safety Tactical Complex that includes a burn tower which provides firefighters practice in the things they will face in a real situation – cutting open a roof, conducting search-and-rescue in heavy smoke, rappelling down a three-story shaft in full gear, in temperatures that can reach more than 700 degrees.

“You have to have one class at the burn tower with live heat and smoke,” Anderson said. “At the stations where we train we use a smoke machine, theater smoke. It gives them an idea of what it’s like to be inside a building, but until you get that dark smoke and heat, it’s all theoretical.”

It’s quickly obvious in talking to both Anderson and Goldstone that they are absolutely dedicated to the mission of volunteer firefighting.

Anderson has been a firefighter for 15 years.

Goldstone has served on the Sister Bay-Liberty Grove department for 17 years but before that was a professional firefighter in his native Portsmouth, England.

You will not meet two more gung-ho firefighters. They co-teach the 60-hour class, but each is only paid for 30 hours.

“Jerrad and I teach this class as one instructor,” Goldstone said. “We co-instruct this because we believe to get these guys on board, we need to volunteer our time as instructors. One instructor for 11 students is impossible.”

But their volunteerism in teaching the course is not completely altruistic.

“What we’re hoping to get out of it – apart from we actually enjoy instructing – is a better student or a better firefighter at the end of this because they’ve had that much more training,” Goldstone said.

“We could spend six hours telling you about a ladder, or we could spend three minutes throwing it up. You learn just as much doing that. For entry level, we like to do a lot of hands on,” he said.

“I would say more than 60 percent of how we do this class is hands-on,” Goldstone added. “The range of topics in firefighting, 60 hours is not enough. That’s why we co-teach. You can get more out of those 60 hours. There are so many topics these guys learn, from the basic chemistry of fire, to ladders, to rescue to firefighting certification, all of that stuff, right through learning the proper fire truck color is red.”

“He’s only saying that because our fire trucks are white and green,” Anderson said.

“If you have a sense of humor, the fire service is for you,” Goldstone said.

Both men point out that the learning never stops.

“You never ever stop learning,” Goldstone said. “You can never go, well, I know enough about that. There’s always more to learn. Departments today are so pro-training, these guys, if they stick with it they will get to go to conferences, expand their knowledge base, earn certifications, all these things that can really help them not only in the fire service but to grow as individuals. One of the other reasons Jerrad and I like to instruct, it keeps us fresh. We have to stay on top of all the techniques we instruct. It forces us to be better firefighters ourselves.”

“And every couple years the curriculum changes,” Anderson said. “The topics change, techniques change, even the practical skill tests change. We’ve got to research it, redo it, practice and pass it on, so it’s great training for us. And that’s just basic fire skills. Then you get into water rescue, ice water rescue, hazmat, steep angle rescue. The list just continues on.”

The group they are instructing started out as an even dozen, but one recruit dropped out early. Anderson said the dropout rate is usually pretty high. 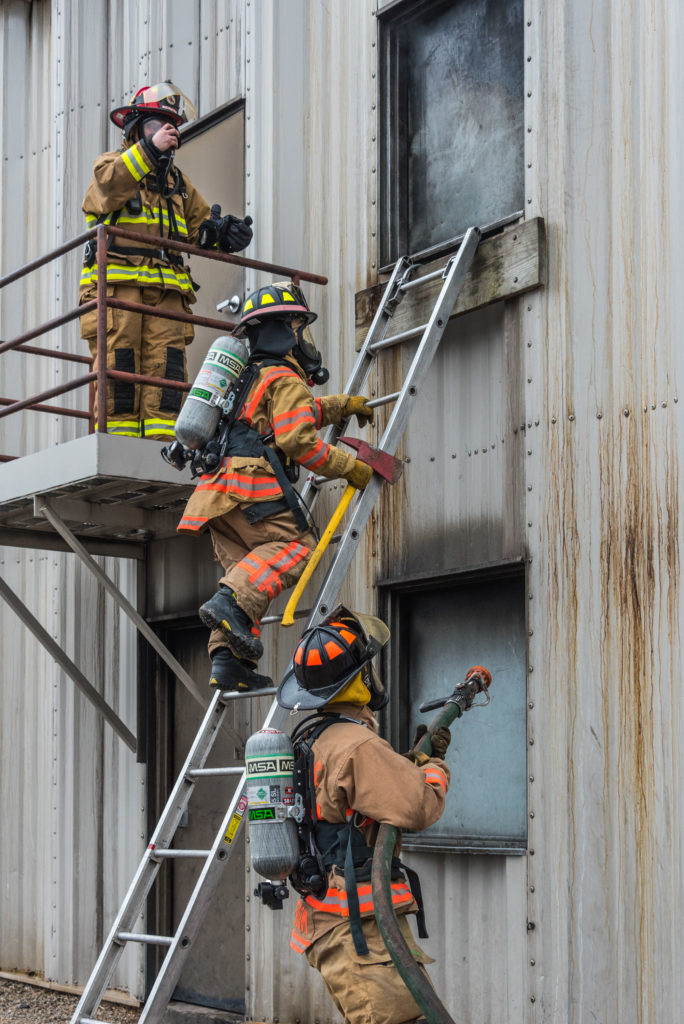 “Usually within the first year of people participating, we have probably a quarter that have taken the class drop out. Either they have changes in their life or it just doesn’t fit in. And then within five years, it seems like three-quarters of the people who started don’t follow through. Usually the people that stick it out are the people who would do it for free. They love the group of guys, they love the challenges both mental and physical. It takes a lot to kill that passion.”

“The fire service is a big commitment in people’s lives,” Goldstone said. “For Jerrad and I, it’s certainly taken a lot, but we get a lot back out of it. For some people, it doesn’t meet their lifestyle or things happen in their life and it changes.”

This particular class of 11 students is unusual for a couple of reasons.

“We have six high school students, all around 16 years of age. It’s one of the youngest classes we’ve ever seen,” Anderson said. “It’s awesome to see their enthusiasm. The hard part of our area, the demographics is an older age. So to get young people interested, even if they go off to college and don’t come back here, at least they have the experience and may help another department. We hope that comes back to us with people who get training somewhere else. It’s huge to get some young people and new ideas and excitement.”

Another unusual aspect of this class is that a majority of the students are training for the Sister Bay-Liberty Grove Fire Department. One of the trainees is with Anderson’s department and one other is with the Baileys Harbor department.

“Usually it’s a little more mixed,” Anderson said. “There is not one department up here that can do everything by themselves, so the more they train together, the better off we’re going to be. Having a class that’s mixed is great. They go on a call and they know each other.”

And that, the instructors say, is probably the most important aspect of the training.

“They develop a sense of teamwork,” Goldstone said. “We’re pushing this all the time, it doesn’t matter where you’re from or what department you’re with, you have each other’s back. You’re a team. By the end of it, we see that difference. It’s huge. It almost makes you tear up.”

“People always joke about the brotherhood and sisterhood, at the start of the class it’s 12 individuals and at the end it’s one group,” Anderson said. “If they continue with more training, they blend that much more.” 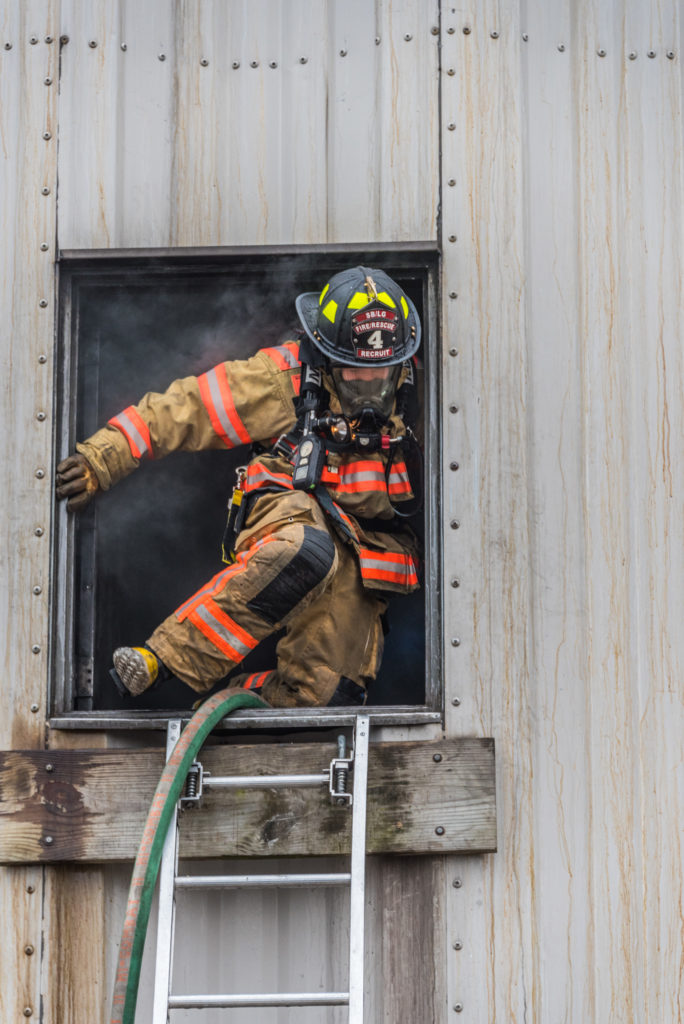 Speaking of sisterhood, one of the 11 recruits is a woman.

“It’s fantastic to be able to give back to the community,” said Kristen Kalms. “My brothers were in the fire department when I was younger and I always was in awe. It takes a lot of courage to do it. Someone asked me if I would do it. I thought about it and thought, well, I’ll give it a shot. First day, actually in love. Fantastic. Very happy. These guys are awesome. You cannot ask for a better group to work with. In the beginning, we didn’t know each other, and now it’s like family. You need to know you’ve got your back covered. Trust is a big thing. You have to be confident that they know what they need to do.”

Kalms’ day job is project manager for an IT company.

“This is kind of like good stress relief after sitting in front of a computer all day,” she said. “The adrenaline rush is huge.”

She had nothing but praise for the instructors.

“Great instructors. Wow. Very blessed to have them,” she said. “They are very dedicated and they’re right there working with you. We’ve got a guy who’s afraid of heights and another guy who is claustrophobic. They have helped us all to the point where we can get through it. They’ve held our hands and made sure we can be confident when we do this for real.”