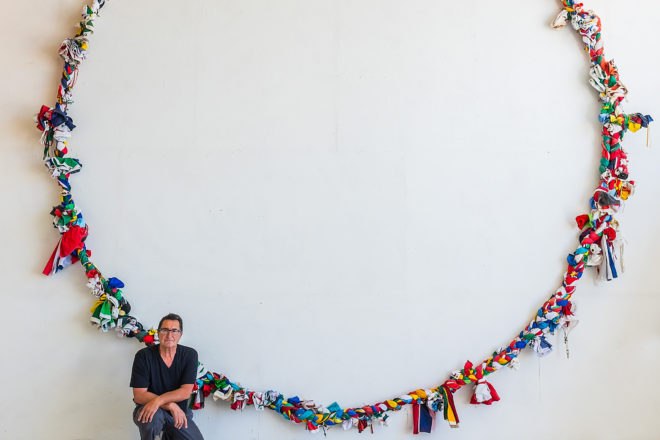 Sculptor Steven Woodward’s studio lies out in the country of Ellison Bay. Though it remains quite hidden from passersby, Woodward is anything but hesitant to allow visitors. In fact, it’s quite the opposite, and I quickly found that out when I visited myself.

Woodward has been creating sculptures, some larger than life, for years. The Pulse talked with him a few years ago about life as an artist, and this time we met to chat about a newer project.

We pulled up to a line of warehouses, one with an open door. The first thing seen within is a giant, colorful circle hanging on the wall that is 22 feet in diameter, made out of materials that if laid out in a line, would be 63 feet in length. These materials happen to be made out of flags from all over the world that are braided together, a project that Woodward finished in 2004, but reimagined in the past couple years.

“Guirlande du Monde,” or “Garland of the World,” is so large that you have to really stand back in order to get the full effect. Even then, it’s impossible to rest your eyes in only one place — they constantly travel around the circle, taking in the different colors and thicknesses. Its size seems fitting as a piece that is meant to represent unity and world peace.

The piece was inspired first by his mother, who knit him a sweater when he was young that had different flags of the world on it. He still has the sweater and pulled it out to show me, grey with the different flags on it.

She also braided rugs for their family home growing up, so he knew if he were to ever braid anything himself, it would be flags, he said.

He spent four months in France braiding the 192 flags that had been donated to him from different embassies around the world, sent with letters wishing him luck in his endeavors and sharing similar hopes for world peace. The pressure was felt, he said.

The original project was linear, but later he reimagined it in a different format to fill up a large space. Compared to the photo, it does something else entirely when viewing it in person — its large scale places you in its center, he said. 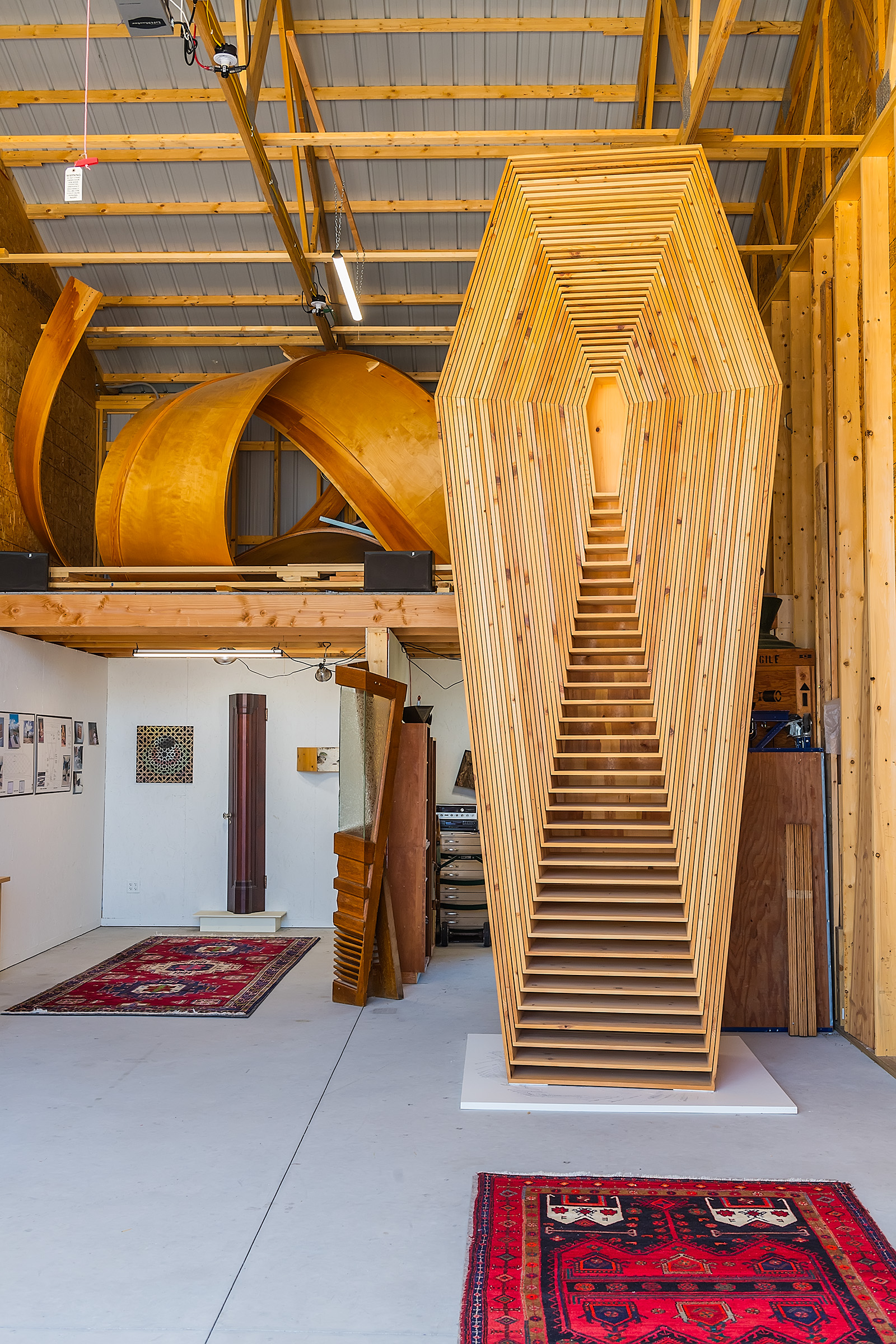 The circular format has a more religious connotation, too. It’s like a mandala, something used as a tool for meditation. Woodward was raised Catholic, but has been practicing Buddhism throughout adulthood. Still, though interested in spirituality, he finds himself entranced by the many spiritual manifestations on earth, therefore not limiting himself to one religion, he said.

“In a very simple way, it reminded me of a mandala as a vehicle to concentrate on and not necessarily to pray to or include in your meditations, but as an image that would invoke not a trance-like state, but where you’re moved.” Woodward said. “Just simply moved.”

Woodward thinks of his work as spiritual, though you wouldn’t be able to tell with just the eye. In a world where there is so much iconography and religion at the center of every culture, he feels it’s important to make his art accessible to any viewer.

“It’s more of finding my place within that world, and being at home in it,” Woodward said.

The “Guirlande du Monde” isn’t the only large sculpture in Woodward’s studio. Hs studio extends to the garage next door where some of his previous works are arranged for viewing, some of them looming feet above us, like his 15-foot coffin sculpture titled, “Untitled.”

Now, Woodward wants to continue sharing his “Guirlande du Monde,” as well as his other works, with anyone that’s interested in viewing it. Aside from that, he’s working on a project in conjunction with the Sister Bay/Liberty Grove Library.

He’s been constructing wooden books made out of recycled wood and birch bark and has attached little mushrooms made out of pages from a dictionary. They will be displayed in the vitrine on entering the building, and he hopes they will be able to teach children in more than just an illustrative way, but it a sculpted way, he said. His display should be ready for viewing in August, along with some storyboards detailing some of his past works in late June.

Woodward found his voice through art, and his hope is viewers will hear it when seeing his sculptures.