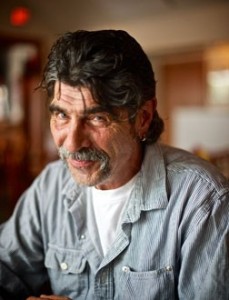 Twenty years ago Mark and his wife Mary White began spending summers near Jacksonport living in a tent on a Lake Michigan beach and involving themselves in theater projects. When they made Jacksonport their full-time home in 2002, “It was tying up the circle,” he said.

Moede makes a life for himself in the thriving theater culture on the peninsula. He recently completed an acting gig in Peninsula Players’ earlier production, the Agatha Christie mystery And Then There Were None.

As a local actor he has the distinction of having performed with every resident professional theater company in Door County. In addition to working with the Players, he has appeared on the stages of American Folklore Theatre, Door Shakespeare, and Third Avenue Playhouse. He has also taken community theater roles with the Isadoora Theatre Company. 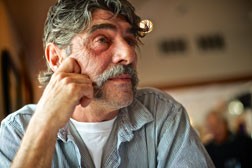 In addition he and his wife in 1991 founded Theater M, a company that has performed at the Town Hall Bakery in Jacksonport and the Woodwalk Gallery. Spencer Milligan has directed a number of the troupe’s productions.

Mark spent much of his childhood in Europe as his father was a theologian who took his doctor of divinity degree at the University of Basel in Switzerland and worked for the World Council of Churches in Geneva. “It was a fantastic time!” Moede said, remembering when as a young man he became an apprentice forester living in a cabin with two men who were in their 60s, helping them maintain mountain paths.

His diploma from the International School of Geneva (that he had attended in part to improve his English as French had become his primary language) was not accepted in this country – no American history – and he had to enroll in New Jersey’s Montgomery High School.

“I have learned from this experience,” he grinned, “that history is written by the winner!”

His theater training began at New Jersey’s Montclair State University and continued at the London Academy of Music and Dramatic Arts (LAMDA). 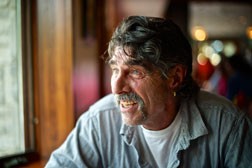 He recalls a dance instructor at LAMDA. “She was 78-79, a large woman with huge corns on her feet and wore old-lady shoes,” he said, “and I couldn’t get beyond her feet!” But when she put a record on and began to dance, “she was the most graceful [person] I’ve ever seen in my life!” It was a lesson in not judging books by their covers, he found. “She was a lovely woman and it was a lovely experience.”

Much of Moede’s training as an actor came from what he calls “the theater of life,” varied travels and experiences, not all of them in classic theater performance. For instance, an affair of the heart took him from Princeton (New Jersey) to Venice (Italy) where he performed Shakespeare in Italian. When the relationship ended, he traveled to London “to learn Shakespearean English.” At the end of the six-month course, he decided to travel in Ireland.

Back in this country he worked during the early ’80s in Trenton as an actor for a community education project, a program called Kids on the Block. Using life-sized puppets, the actors provided children with a life-skills education, including information about disabilities, drug usage and sexuality.

This experience provided Moede with an education as well; “The first time I encountered armed guards in a school was depressing!” he recalled. “But kids still wanted to learn.”

He and his wife bought a house “in the ghetto of Trenton,” he said, and by helping her with her project of building children’s gardens, he had additional lessons in what he calls the theater of life. 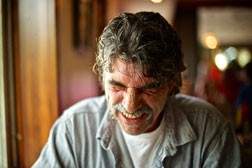 While his performances, master classes and studies have also taken him to Philadelphia, New York, and to the Switzerland of his boyhood, Door County has a special attraction for him, “a way of finding a home” as his family is rooted here. “It’s a magical place,” he said, “an intersection of all those things that cause people to be successful” in the arts. “You can almost make a living!” he joked. People on the peninsula appreciate the arts, especially dramatic arts; our own Peninsula Players, he reminds us, is the oldest resident theater company in the United States.

“If I accept the fact that I’m not going to get rich or be a superstar,” he said, “I have the freedom to do what I want here.”

His bucket list has been to act for every professional theater company in Door County, “more than once!” he added. But the goal is “not an ego thing,” rather enjoying the reciprocity, the acting of the performers and the reacting of the audience, the relationship between the actors and the crew, the experience that ultimately becomes “a family thing.”

During his time on the peninsula Moede has accumulated good memories from his acting experiences, one from his Theater M production of The Revival of Billy Sunday, the story of a professional baseball player turned evangelist. The subject appealed to him in part because of his family; “I couldn’t go into theology!” he said, and then explained there were already too many clergymen among his relatives.

But in particular he was intrigued by the way the script “explained issues that dealt with faith, proselytizing and being on stage” as well as his “desire to be what I am.” As an actor “I find God in theater,” he explained, through the better understanding of people and relationships. “I firmly believe we have all these people inside us, if we can just find them.” 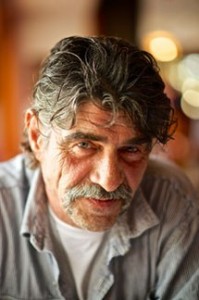 He has good memories of performing comedy, The Complete Works of William Shakespeare (Abridged) with Door Shakespeare and The Spitfire Grill with American Folklore Theatre, “one of my favorite shows – a great experience!”

An especially significant production for him was Tennessee Williams’ one-act play Something Unspoken with his wife Mary White, produced by Theater M at the Third Avenue Playhouse. And for personal reasons, he enjoyed the title role in the show Tuesdays with Morrie at TAP. His sister had lived with cerebral palsy and died from Lou Gehrig’s disease. The play “shed light on human relationships that form,” he said, “what bonds of love can do.

“And that’s what theater can do,” he added, looking back at his more than 40-year career, “allow people to feel, weep, and celebrate: all the things that are important.”