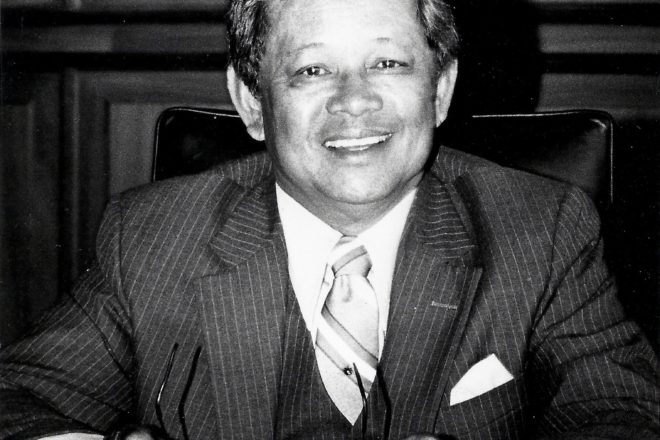 In a weird sort of harmonic convergence, I’m composing this column on March 24th on what would have been my father’s 94th birthday. Bernaldo Daniel Bicoy passed away four years ago, just a handful of days before he was to turn 90. While I’m naturally always a bit reflective when his birthday rolls around, 2017 is particularly poignant for me.

On April 3rd of this year, I will be exactly 47 years and 5 days old. While that hardly seems a noteworthy age in the grand timeline of one’s life, it’s a day that has long been circled on my calendar. For on April 3rd I will be precisely the same age my father was when I was born.

While few of my childhood friends gave any thought about the age of their own father, it was never far from my mind. Most other dads I knew were in their late 20s or early 30s when my father was in his 50s. At a time when other kids’ parents were a part of the counterculture, Dad was a decorated veteran of World War II and Korea, wore three-piece suits every day, and listened to Glenn Miller and Tommy Dorsey on his 8-track tape machine. In other words, Dad stuck out like a sore thumb.

I can still clearly remember the day I turned 18. I was standing at the kitchen counter next to Dad and watched him open the envelope containing his very first social security check. He had recently celebrated his 65th birthday. Dad was always a lot older than the other fathers. He was always an old man to me.

Yet in an odd contradiction, as old as I knew my father was, I never seemed to consider that he had lived nearly half a century before I was born. Yes he seemed old, but the arrogance of youth led me to conclude that obviously nothing of consequence could have occurred in his life before I had entered it.

As a child, I didn’t like that my father was so much older than all the other fathers. During my most formative years he was at the peak of his professional success. That left precious little time for family. Further, Dad had been married several times and thus his attention was necessarily divided. In later years, I would jokingly begin phone calls by saying, “Dad, this is child number two from wife number three.” I always got a good laugh as he tried to figure out which of his children was calling him.

I have no memory of throwing a ball, riding a bike, or going camping with my father. I can recall only one occasion when we went to a ballgame together. We didn’t do the things together that other fathers did with their sons. When I was young, I saw that as his failing. Perhaps I still do.

Yet as I reach the age my father was when I was born, I have begun to appreciate the incredible gift I was blessed to receive precisely because Dad lived half a century before I entered his life.

On many occasions, I’ve quoted extensively from Falling Upward: A Spirituality for the Two Halves of Life by the Franciscan priest Richard Rohr. It explores how most of us spend the first half of our existence focused on our career and individual selves. Yet the best among us eventually transition to using our time on earth to building a meaningful life. Unlike the younger parents of most of my peers, when I was a boy my father was most certainly in that second half of life about which Rohr writes.

When I was 10 years old, my father was 57, professionally successful, and no longer felt the need to prove himself to anyone. Rohr writes that people who have made the transition to the second half of life think to themselves, “I no longer have to prove that I or my group is the best, that my ethnicity is superior, that my religion is the only one that God loves, or that my role and place in society deserve superior treatment. I am not preoccupied with collecting more goods and services; quite simply, my desire and effort – every day – is to pay back, to give back to the world a bit of what I have received. I now realize that I have been gratuitously given to – from the universe, from society, and from God. I try now, as Elizabeth Seton said, to ‘live simply so that others can simply live.’”

Imagine what a gift it is growing up with a father whose age and wisdom has given him this kind of perspective of the world.

Rohr writes that people like my father feel, “We no longer need to change or adjust other people to be happy ourselves. Ironically, we are more than ever before in a position to change people – but we do not need to – and that makes all the difference. We do what we are called to do, and then try to let go of the consequences. We usually cannot do that very well when we are young.”

Rohr continues, “Now we aid and influence other people simply by being who we are. Human integrity probably influences and moves people from potency to action more than anything else.”

For most of my life I absolutely did not want to be 47 years and 5 days old with a brand new baby. I wanted to be a young father with time to spare and energy to share. I don’t regret having kids in my 20s, yet in many ways I wish I somehow could have been more like Dad when I was a young father. Unquestionably, as a boy I was a beneficiary of the wisdom he developed in the second half of his life.

After Dad died, I went into his study and sat in his chair. At nearly 90 years of age he had been writing his biography on a computer that many would have considered slow and virtually obsolete. Before I left I disconnected his keyboard and brought it with me home to Door County. I still use it every day at the Community Foundation. My hands touch the same keys as my father’s did. As I enter the second half of my life, perhaps someday I will be able to articulate the example he gave me and echoes of his wisdom might be heard in the words I write.

Bret Bicoy is president and CEO of the Door County Community Foundation. Contact him at [email protected]