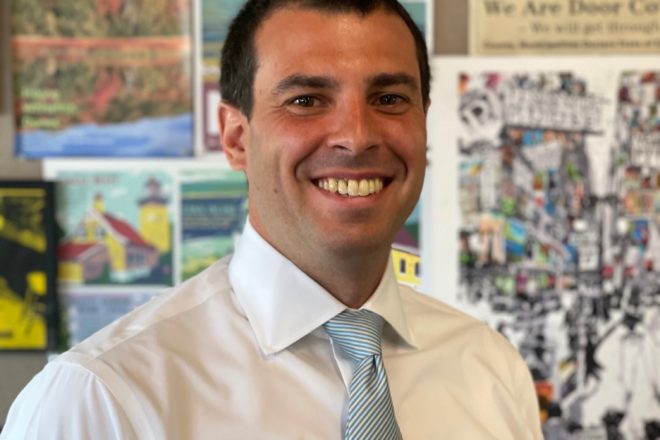 The race is forming for the 2022 midterm elections, with five Democrats already running for U.S. Sen. Ron Johnson’s seat in Wisconsin.

Johnson has not yet announced whether he’ll run for a third term during the November 2022 race. The U.S. Senate primary will be held Aug. 9, 2022.

One from that field of five, Alex Lasry, stopped by the Peninsula Pulse office in late May on a swing through Door County. The 35-year-old, on leave from his job as senior vice president with the Milwaukee Bucks, helped to spearhead Milwaukee’s effort to land the 2020 Democratic National Convention and worked in various roles for the Obama administration. He’s a graduate of the University of Pennsylvania and earned his MBA from the New York University Leonard N. Stern School of Business.

Lasry talked about a variety of topics, such as the need for reliable, affordable broadband across the state; public transportation; and investing in education at both the public and trade-school levels. Federal investment in all these constituent parts would create jobs, raise wages and lift more people up into the middle class, he said.

“When you talk to people about what it would take to start a company here or create jobs here, it’s not tax subsidies,” Lasry said. “It’s ‘Do you have a good labor pool? Is there a good quality of life? And what’s the transportation, because is my labor pool going to be able to be expanded?’ If you’re going to bring 400, 500, 1,000 jobs somewhere, you need to make sure people want to live there. And, we’ve got the quality of life. Living in Wisconsin is awesome. Everyone loves it. But now what we just need to do is fill that in: more investments in education, more investments in our trade schools so we’re able to train more workers and build that labor pool, and then more public transportation so we’re able to expand the labor pool so people can live where they want.”

People care about job creation and wage increases, he said, and everything else is “kind of just noise.” Some of that noise may arise over his privileged background. Lasry’s grandparents emigrated from Marrakesh, Morocco, when Lasry’s father was eight years old. His father, Marc, attended good public schools and worked his way through college at Teamster Union jobs before heading to law school. Today Marc Lasry is a billionaire hedge-fund manager and the owner of the Milwaukee Bucks organization that employs his son.

“He became a very great American success story,” Lasry said, “but the story my dad grew up with is hard to do today. It’s hard to get a good public education, hard to graduate from college without a crushing amount of debt, or find a good union job. That’s harder to do today, and it shouldn’t be.

“My dad always says his story couldn’t have happened anywhere else,” Lasry said. “That’s what we need to be able to bring back: the idea that you can do all that.”

Lasry said a lot of politics is showing up and giving people the opportunity to have a conversation with him and build personal connections.

“We’re going to go to places that Trump won, and there may not be a ton of votes, but someone’s going to be able to say, ‘Yeah, I met Alex. He’s a good, honest, decent guy. If he goes to Washington, I’m going to know where he stands.”

The other four Democratic candidates to date are Gillian Battino, a Wausau radiologist who’s making a first run for office; Sarah Godlewski, Wisconsin treasurer; Chris Larson, a member of the state Senate since 2011 who previously served on the Milwaukee County Board; and Tom Nelson, who served for six years in the state Assembly and as Outagamie County executive since 2011.